The Best Day of my Life

In case you couldn't tell, I tend to think in terms of narratives, anecdotes, and 'onion stories.' When it comes to my to-do list/practical tasks, my memory is like Swiss cheese, but for major moments from my past, minute details of Stuff that I Did, or the like, my mind is a steel trap. It's quite nice for the most part, because it means that I can remember the happiest moments of my life in high definition, so to speak.

I'll get to the Best Day Ever in a minute, but first: the skirt of my dreams! I waited for what felt like an age (e.g. about six months) for this skirt to restock, and as soon as I got the email notification that it was back in stock, I snapped it up. To my never-ending joy, it arrived last weekend! 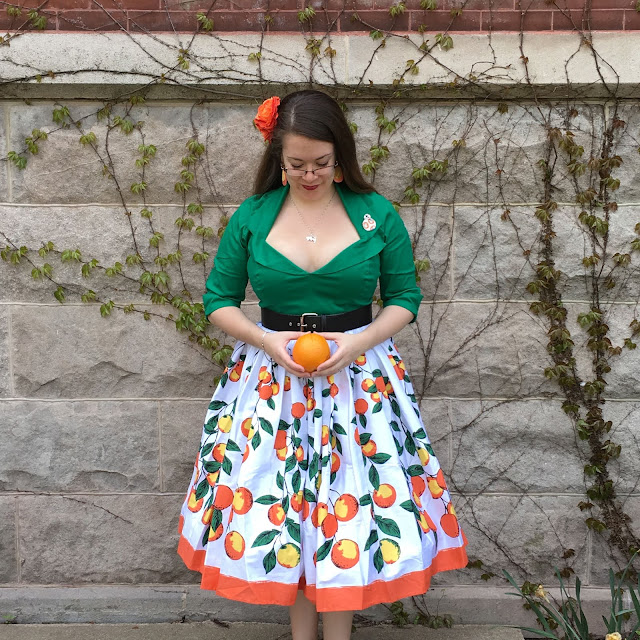 I'm a firm believer in the importance of managing expectations to avoid soul-crushing disappointment, but I wasn't able to prevent myself from hyping this skirt up to mythic proportions. Luckily, it really is as gorgeous in person as I'd expected! The colors are so perfect and bright, and that little hint of yellow  in the pattern opens up a world of alternative styling options. For this one, though, I went with an outfit I've wanted to wear for months.

Sizing: After reading that the new/restocked Jennys were running small, I hemmed and hawed and finally just sized up. While I normally take a large in Jenny skirts and dresses, I initially went for the XL. The waist measured 15.5" flat, but for some reason, it felt too big once it was on, so I returned it and got my usual large. It's a bit smaller than most of my other skirts in this style, but at 14.5" flat with a little give in the waist, it's just right (provided I don't wear it on a food expedition!) 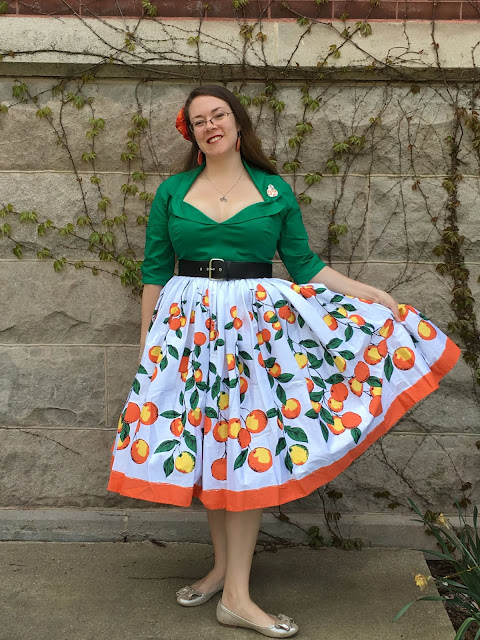 When I'm smiling because I'm really happy, my eyes close. Wedding photos are going to be an adventure. 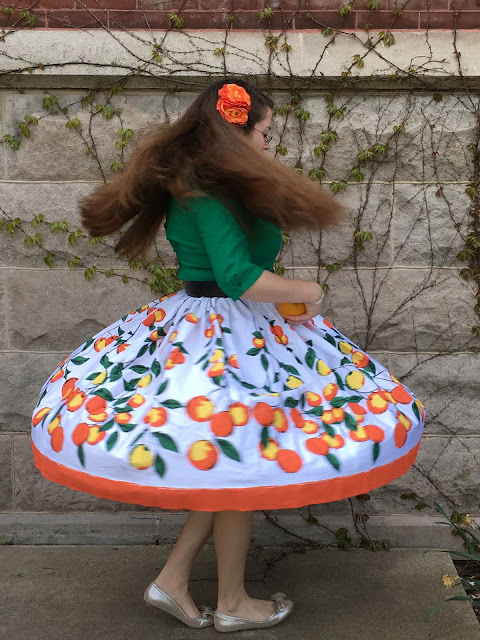 I just spent way too long savoring the fact that I finally got the perfect twirling photo. 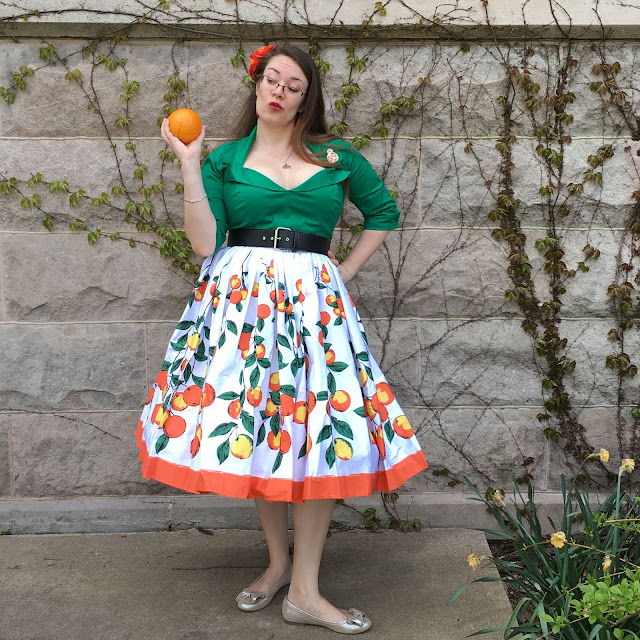 At this point, you might be wondering: what's the connection between the first paragraph of this post, this skirt, and the best day of my life? Here's a hint: 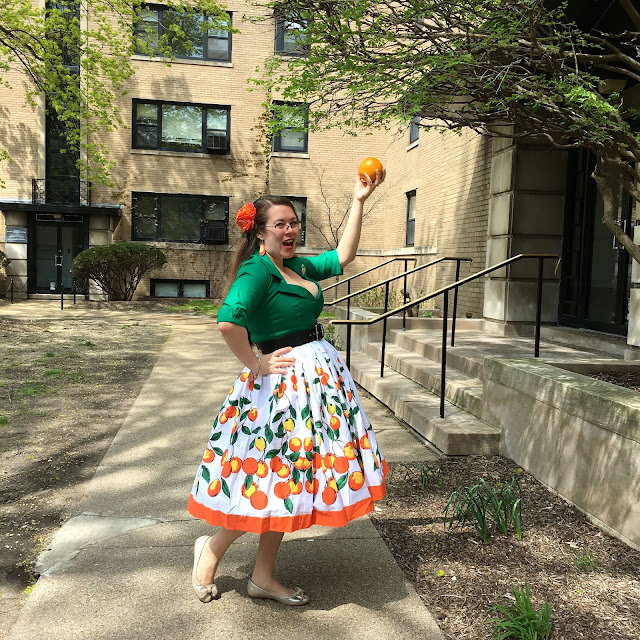 If you're a '90s kid, you might recognize this photo as my take on an album that defined my middle school years: 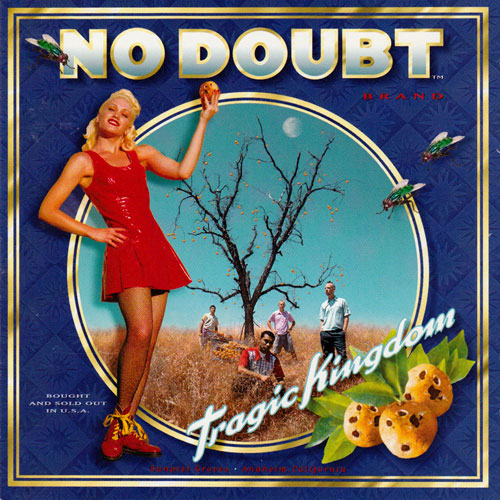 Full disclosure: I can't take credit for this idea. Someone did a similar shot with the Bernie Dexter orange-print dress on Instagram a while back, and the idea got lodged in my mind. For the life of me, though, I can't remember who posted that photo (there's that Swiss-cheese memory in action!)

The absolute best day of my life that didn't involve the birth of a family member was the day that I got Tragic Kingdom. Believe it or not, there was a time in my life where I'd never seen Star Wars. (Crazy, right??) When the Special Edition came out in 1997, it occurred to my parents that I might enjoy the movies. My dad asked if I'd like to go, and being a human Golden Retriever (i.e. someone who loves going places, no matter where we're actually going), I said yes.

We checked the movie times in the newspaper because it was 1997, picked a showing that weekend, and when the day arrived, we went off to the mall. When we got there, we discovered that the showing we'd chosen was sold out, so we got tickets to a later showing. We went to the Gap, where I fell in love with a brown corduroy peacoat. The sleeves were too long, so we went up to the pay phone and called my mom to ask if she thought I should get it ("Sure! She'll grow into the sleeves!" Spoiler alert: they're still too long.)

After going back to buy my first grown-up coat (!!!), as I thought of it, we went to the record store. This being January 1997, 'Don't Speak' was all over the radio, and both my dad and I were interested in the rest of the album, so we decided to go halves on it. We still had an hour or so until our movie, so we decided to take a drive and listen to the album.  Initial impressions were quite favorable.

Then we went to the movie. Star Wars was absolutely love at first view for me. It was honestly like nothing I'd ever seen before, and it's not really an exaggeration to say that it changed my life. I got the original theatrical releases on VHS for Valentine's Day that year, and watched them all at least once a week until I was well into high school. I went to the library to read Geocities fan sites filled with Star Wars trivia (since we didn't have internet until I was 15), and check out Extended Universe novels. It was a huge deal, and it's still sort of an instant comfort to pop on one of the original trilogy films.

The last detail I remember about that day happened as we were walking out of the mall, past the candle shop. My dad asked "did you notice what happened to Darth Vader at the end?" I was like "duh, Han Solo shot him into space!" My dad looked at me and said "Did you notice that he managed to get his spaceship under control? That leaves things open for a sequel." MIND. BLOWN. It was my first step into a larger, savvier world.

This may seem like sort of a mundane series of events, but it's one of my happiest memories. And Tragic Kingdom is still in my personal top-5 albums of all time.

What's the best day you've ever had?

Facebook
Google Plus
Bloglovin'
Posted by Emily at 5:47 AM