Today is the the 55th anniversary of human spaceflight! On this day in 1961, Yuri Gagarin became the first human being to fly in space, beating America's Alan Shepard by just under a month, and the Soviet Union took an early lead in the space race.

In case you haven't noticed, I'm a huge space-exploration aficionado, so I've been galactically excited to write this post! My outfit today is similarly on-theme: I'm wearing a my new-to-me space-themed skirt that I picked up from the incomparable Bristol. The photos below were taken while I was in New York, but I'm wearing the skirt again today because I feel like this is almost a holiday. On my Instagram, you can see how I styled this skirt today, with a super cool Atomic Lucite rocket brooch and sweater combo. I can't wait to show this skirt off to all my new coworkers! 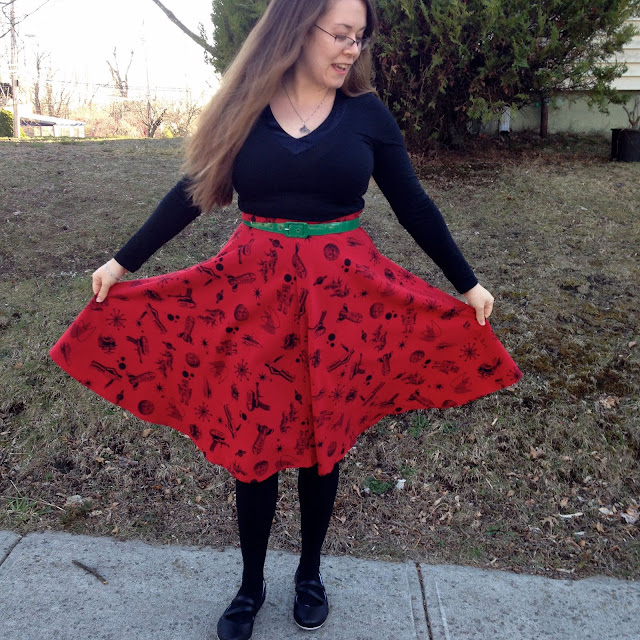 Somehow I can't seem to make myself stop talking, even when I know I'm being photographed. 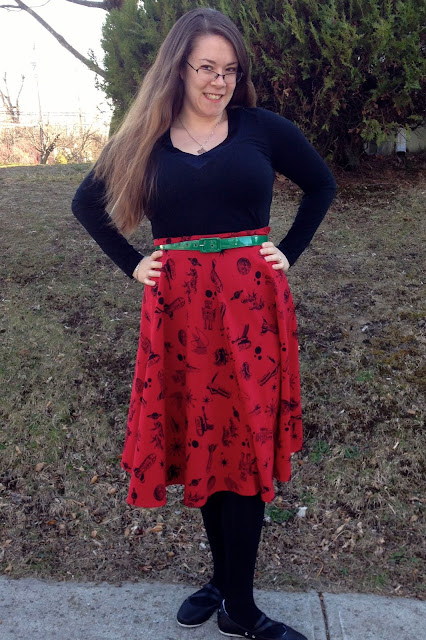 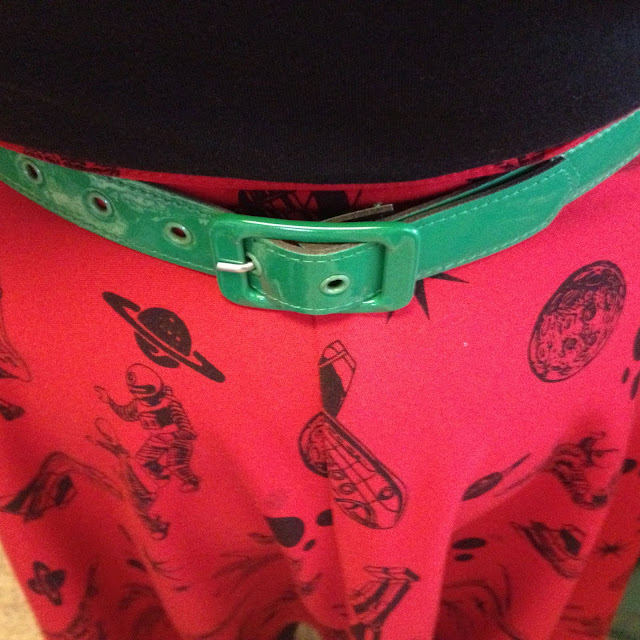 This print is so perfect! 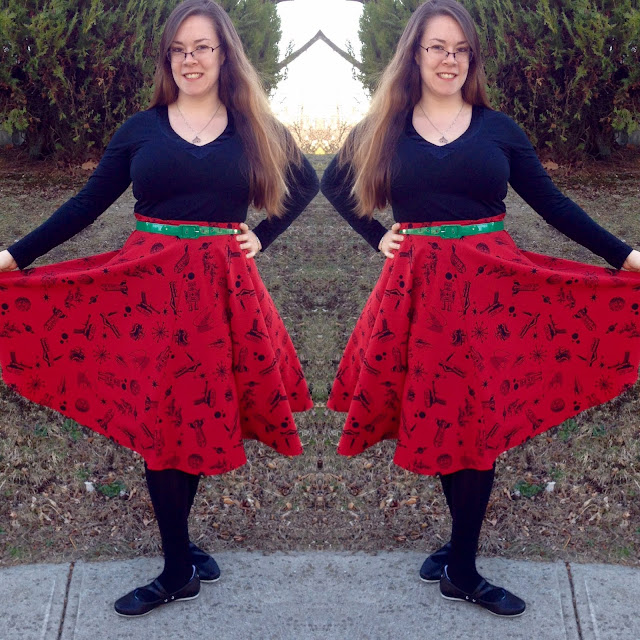 I bet you didn't realize there were two of me.

Back to human spaceflight! The space race is one of the most fascinating historical events to me for a number of reasons: it shows the incredible potential of human ingenuity and cooperation, it involved going to another heavenly body, and it provides endless fascinating angles for nerding out. As I'm a political scientist by training, the political dimension of the Space Race is one of my favorite things to geek out over.

The Space Race, some have argued, helped to keep the Cold War from getting too hot. A major factor spurring the United States to throw billions of dollars at the space program was the 'fear of a Red Moon,' or in other words, the fear that the Soviets would develop rocket and satellite technology that would give them an unbeatable military advantage. Paradoxically, while the focus on space superiority spurred both countries to develop ever-more-powerful inter-continental ballistic missiles (ICBMs), it kept either country from using them to lob nukes at the other:

"What is affectionately and nostalgically remembered now as the Space Age might more accurately be perceived as the Rocket Age – with rockets in underground silos, rockets aboard submarines, rockets that were state secrets, and rockets that were public spectacles… At the very heart of the Cold War is the remarkable fact that, of those tens of thousands and trillions of dollars of missiles, the only ones that were actually fired carried satellites, dogs, chimps, and men" – Craig Nelson, Rocket Men p.90.

Achievements in space exploration also had major symbolic value. After his orbit of the Earth, 27-year-old Yuri Gagarin instantly became a national hero in the Soviet Union. (Sidebar: this makes me really ashamed of my lack of achievements when I was 27! He went into space. I… was writing a dissertation.) 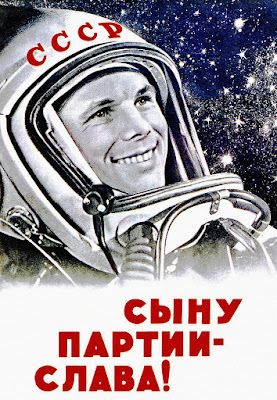 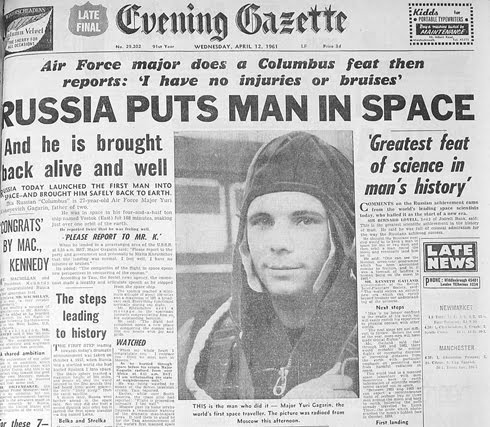 The Americans freak out. When a reporter called NASA at 5:30am to get a statement on Gagarin's feat, the PR chief, Shorty Powers, replied "What is this? We're all asleep down here!" The headlines wrote themselves.

Sadly, Yuri Gagarin died a scant seven years later, when the MiG he was piloting in a training exercise crashed after running into the afterburner turbulence of a supersonic jet. 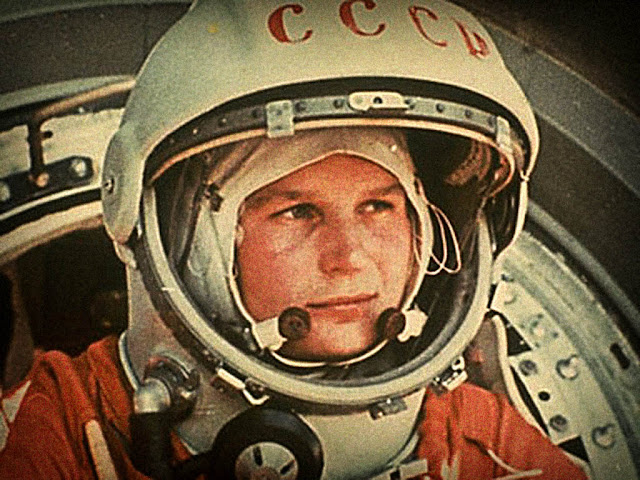 In the early stages of the Space Race, the Americans lagged behind the Soviets at every step. The Soviets put the first satellite into Earth orbit with the launch of Sputnik 1, and blasted the first human being into space on this day 55 years ago. In both cases, the Americans were caught with their pants down, so to speak: high levels of secrecy in the Soviet space program meant that these achievements were a total surprise to the rest of the world, and the Americans lagged behind in developing the necessary technology. How in the world did the Americans beat the Soviets to the moon? Stay tuned for the next exciting installment of my Space Race series!

Email ThisBlogThis!Share to TwitterShare to FacebookShare to Pinterest
Labels: nerding out, space race, Steady Clothing, what I wore