Has anyone else planned a wedding? I'm less than two months out from mine, and am just starting to realize that there are actually things I need to be doing. Of course, I'm dealing with that realization by writing a post about the bridal luncheon my sister threw for me while I was in New York a few weeks ago. Technically, this is productive!

I was planning to wear my beloved tomato-print dress, but after realizing that it was going to be a family-style meal at an Italian place, I 86'd the fitted-waistband idea and went with a stretchy ivory dress. Everyone from my bachelorette party wore their fascinators, and tried to limit the number of "…because I'm fascinating!" comments to a reasonable number. 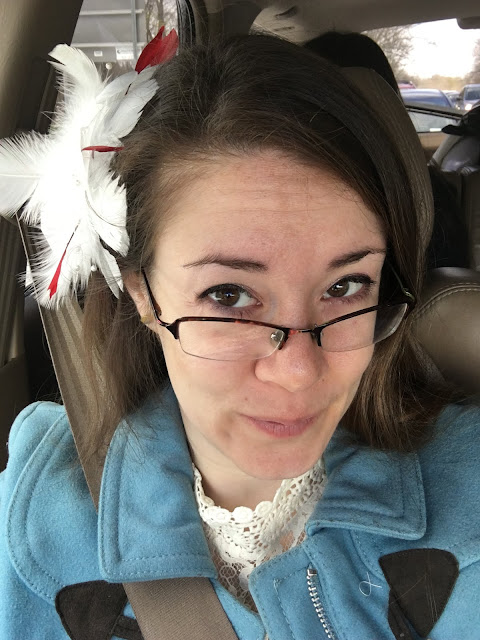 Fun fact: this coat belongs to my sister, but in the past 10 years or so, I'm the only one who has actually worn it.
I've done a surprisingly good (albeit unintentional) job of hiding the depth of my Star Wars obsession, but for those of you who don't yet know how deep my love runs, you're about to find out! First, an important fact: my mother has an SUV and while I'm much shorter than my sister, I typically sit in the front seat. I had also set up my brand-new phone that morning, so I was totally absorbed in playing with the settings as I walked out to the car.

Why am I telling you this? Well, it's because she managed to surprise me with decorations, by which I mean a six-and-a-half-foot-tall stormtrooper balloon and sundry other Star Wars decorations. I walked into the restaurant and saw this life-size balloon and was literally speechless. But before I'd even recovered the power of thought, let alone speech, this happened: 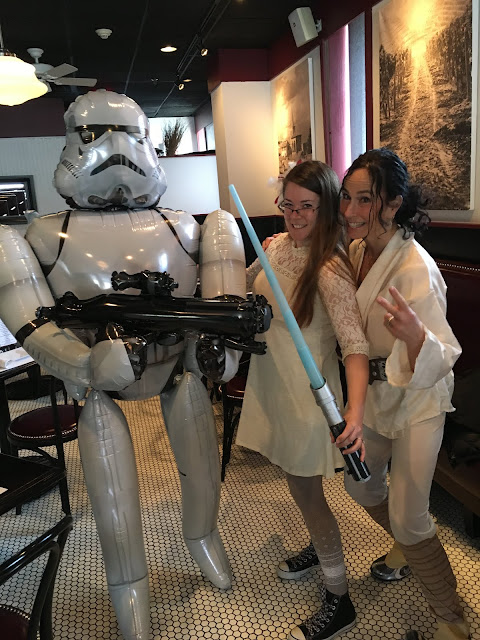 Hey look, it's the dress I wore, and my trusty Chucks, because they are hella bridal.

My aunt actually ordered a Luke Skywalker costume and I had to sit down because it was the LAST thing I ever could've imagined. I put a video on my Facebook page, if you're wondering what a human Blue Screen of Death looks like. 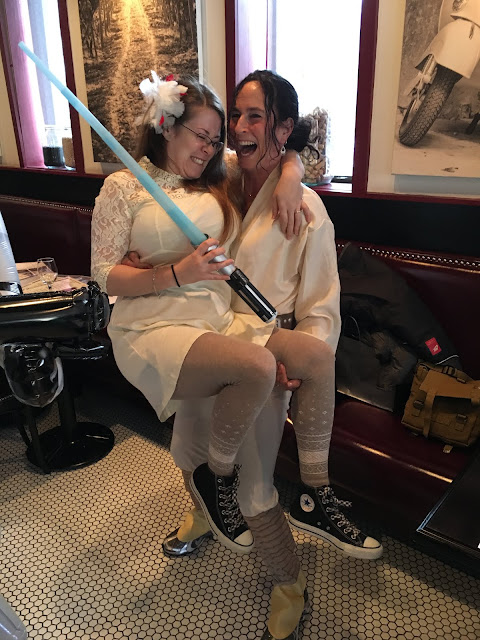 My aunt is a personal trainer and once beat a Marine recruiter in a pushup contest.

The party was absolutely lovely! My sister and mother planned everything (except for my aunt's Star Wars costume, which was all her!), and it was nice to just show up and go with the flow! My aunts, cousins, New York friends, godbabies, and my mother's best friend all came, and while I wish my soon-to-be family and LA friends could have been there, it would have just been unreasonable to expect them to fly cross-country twice within less than three months.

I was also right to wear a loose jersey dress, because I ate a staggering amount of bread, penne a la vodka, and more bread. 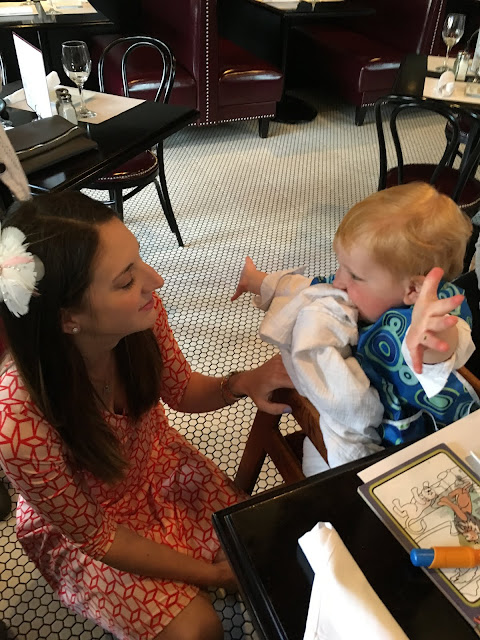 The only boy who was allowed at the party! The twins were so good, even though this was smack in the middle of naptime and they are two and a half. 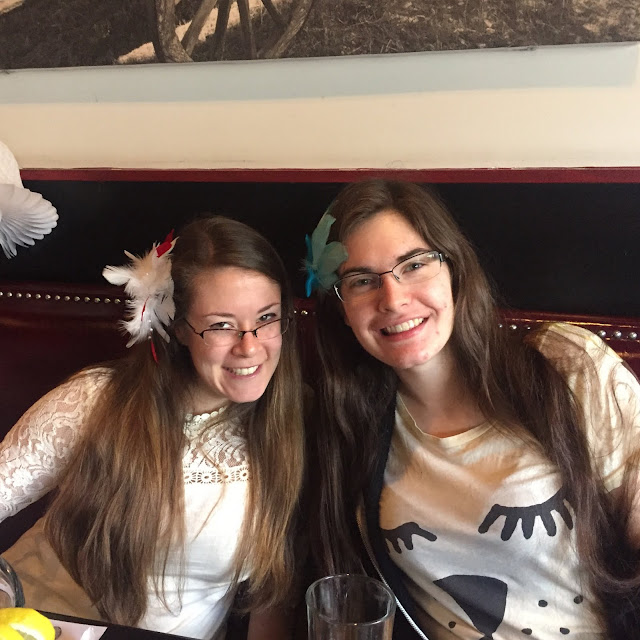 Fun fact: my godbabies like to troll my sister and me by pretending they can't tell us apart. We were trying to think of ways for them to tell us apart one day, and Ronnie was like "Emily has glasses… no, wait… Emily has long brown hair… no, wait… Emily is short… no, wait, you're babies, every adult looks like a giant to you…" We couldn't think of a good mnemonic for them! 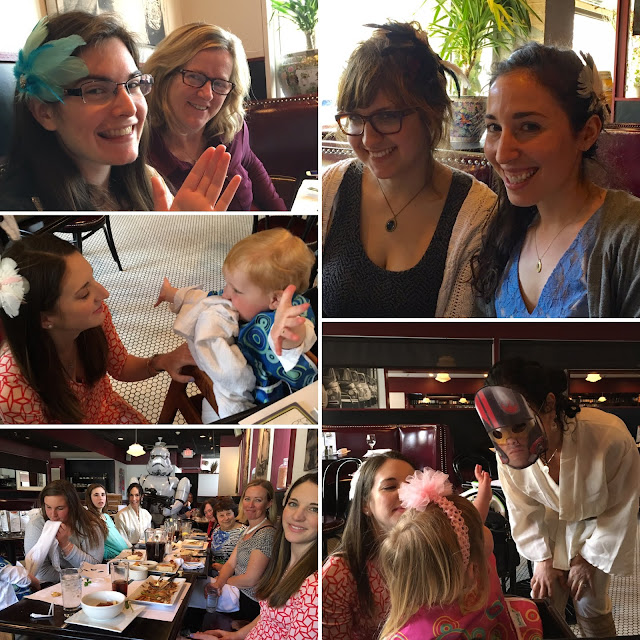 All of the guests! 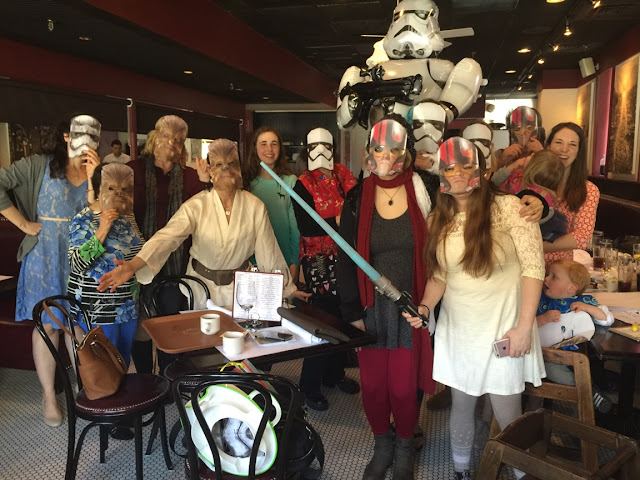 My mom also got enough Star Wars masks for everyone. I got to hold the lightsaber, because I'm the bride. The guy who took this photo for us actually asked, with no small amount of confusion, what type of party we were having. Just a bridal luncheon, dude. Just a totally normal wedding event.

What's the best theme party you've ever been to?

Facebook
Google Plus
Bloglovin'
Posted by Emily at 6:50 AM