Fun fact: I am getting married in June! While I was in New York for my mother’s birthday/dress fitting, my friends organized a bachelorette party and my sister threw me a bridal luncheon, and I had a blast at both. My friends know me really well (slash I have a core group of activities and foods that I really love), so the bachelorette party was basically perfect.

All I knew when I woke up that morning was that we’d be leaving on a 10:55 train to Manhattan, and that I wouldn’t be doing too much walking, but this was the perfect level of information as I love surprise parties. A good friend of mine in LA threw me a surprise birthday party last summer (my first surprise party ever!) and I was so delighted by it! I’d recently gotten this Bernie Dexter dress, and decided to wear it even though (or perhaps because) it isn’t remotely bridal. 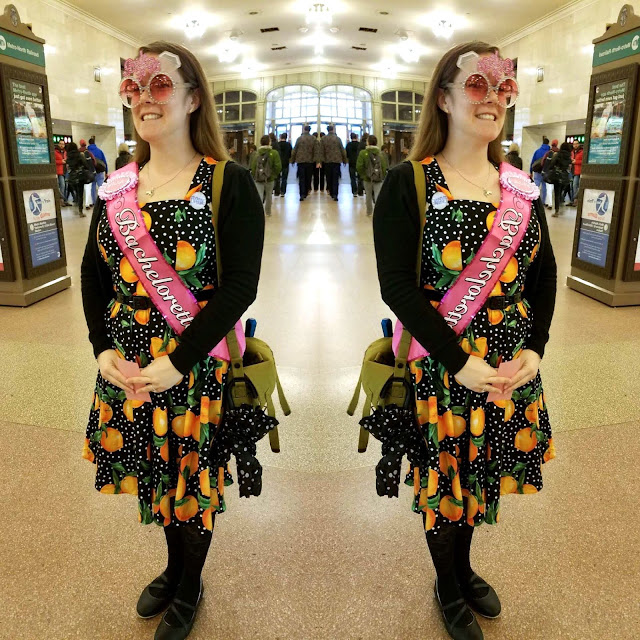 Don’t worry, my friends provided plenty of party swag for me to wear. I thought I was getting funny looks as I walked through Grand Central with them, but it turned out that we passed someone that knew one of my friends.

This was my first Bernie Dexter dress in the Veronique cut, but I’d heard a lot of good things about it and studied the review that Lauren-Blair kindly posted before I ordered. I have to say, the raves I’d heard were spot on: this cut is a delight! The print is vibrant and fun, and I absolutely cannot overstate how great the fit is. My favorite thing about this dress might be the shape of the sleeves/straps and the neckline. The neckline is slightly lower than I might wear to work, but that’s easily solved with a cardigan, scarf, or bandeau, or slightly less easily solved by taking the sleeves in a tad. (Note to self: buy some bandeaus!) The large fits me like a glove at my current measurements of 39” in the bust and 31” in the waist, and the hem falls just below my knee, which I think is the most glorious skirt length in human history. PS: for reference, I continue to be 5’2”. That’s unlikely to change any time soon.


Sometimes we be sittin’ on trains…
L to R: Katie, me, Ronnie

The bachelorette party delegation from my hometown met my college roommate (Heidi) and my best friend from high school (Jenny) at the Only Place to Meet People Arriving on Metro North: the clock in Grand Central Station. Someday I might do an entire post on the time I embarrassed myself in my first graduate seminar by shouting out “the clock in Grand Central,” but that is not this day. Anyway, Jenny had made clues for each activity, and the first one said something to the effect of “our first stop will be fascinating!” I had a brief moment of “is this a joke about fascinators?!? nahhhhh” and we boarded the train downtown.
My sister is a human selfie stick.
L to R: Ronnie, Katie, me, Jenny, Heidi

Turns out my first instinct was right! Katie, who is the mother of my godchildren and a friend since birth, had gotten the idea and found a place that does bespoke hairpieces and group hairpiece-making classes! She had also gotten bagels and champagne, which made it even more perfect, since everything is better if you have food and champagne too. I had so much fun making my fascinator. It was also super neat to see how strongly everyone’s personal style came through in the pieces they made. We wore them for the whole rest of the weekend!
The coolest people wear glasses with their glasses. 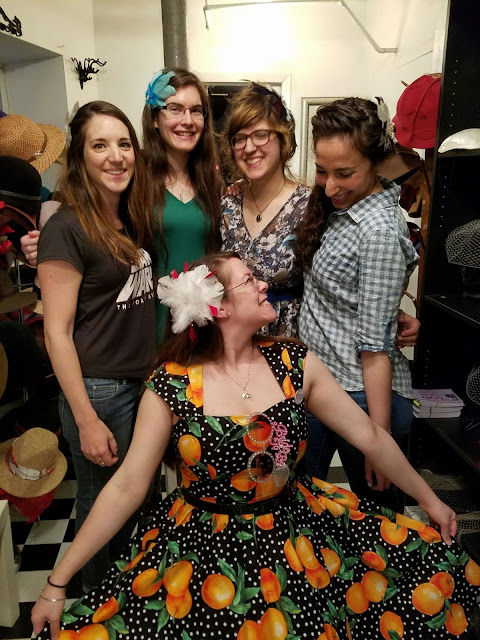 After that, we stopped for coffee and then went to an old favorite of mine and Heidi’s: B-Side. We were pretty much the only people there, since it was early afternoon. When we got there, the last half of Men in Tights (a favorite of mine from way back) was on, and after it ended, the bartender put on the Force Awakens, which blew my mind because no one had requested it and I’m obsessed with Star Wars. I’m taking it as an omen that the universe bestows its blessing on my marriage ;).
I’m actually not totally sure when this photo was taken, but it looks like the face I probably made when Star Wars came on the TV, so let’s call this a shot from B-Side.

After a while, it was time to eat, so Jenny handed me a pizza brooch she’d made and directions to a yummy pizza restaurant. I forgot to take any pictures of the brooch, card, and food, because I was too gung-ho on pizza, but we did stop on the way to take a few photos:
Can you guess who Jenny is pretending to be?
(Also, how did I not notice how cool her boots were until just now?!?) 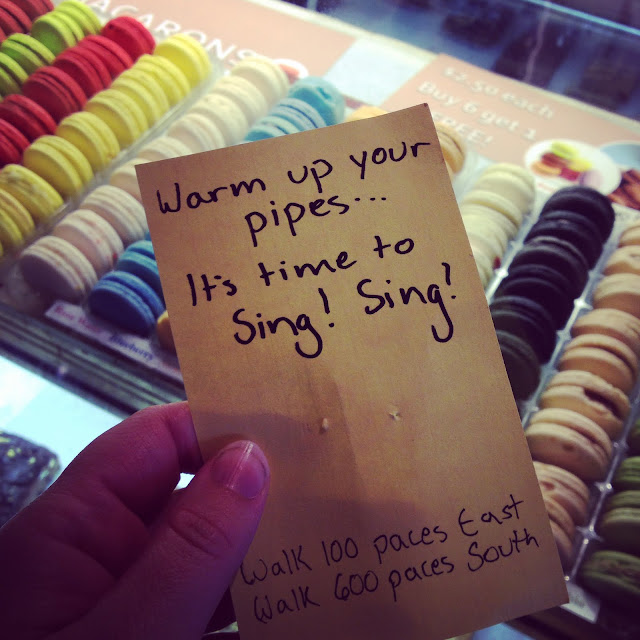 And we went to karaoke! I posted a video from this on my Instagram, but since it was dark and karaoke time is Serious Business, I didn’t do much photography here either. Instead, I picked a zillion songs, was the loudest one in the room even when my friends had mics and I did not, and lost my voice. To me, that’s successful karaoke!

We all went back to my hometown together, since my bridal luncheon was the next day, and most of us took photos of Ronnie, who is a lifelong teetotaler, asleep on the train. For the sake of her dignity, I’m not posting those, though I did show them to my entire family the next day.

Tl;dr: my friends are awesome and picked super fun surprises!!

What was the best party anyone has ever thrown in your honor?
Posted by Emily at 4:57 AM