News flash: I’m a gearhead. I’ve been interested in cars since at least fifth grade, when I used to borrow my dad’s Car and Driver magazines and read them from cover to cover. My dad started taking me to the NY International Auto Show in 1997, and we went just about every year until I was well into college. Once I moved to LA, though, I wasn’t around during Auto Show week anymore, so it had been almost a decade since the last time we went together. Since I was home last week, though, we were finally able to go again, and I had a blast! 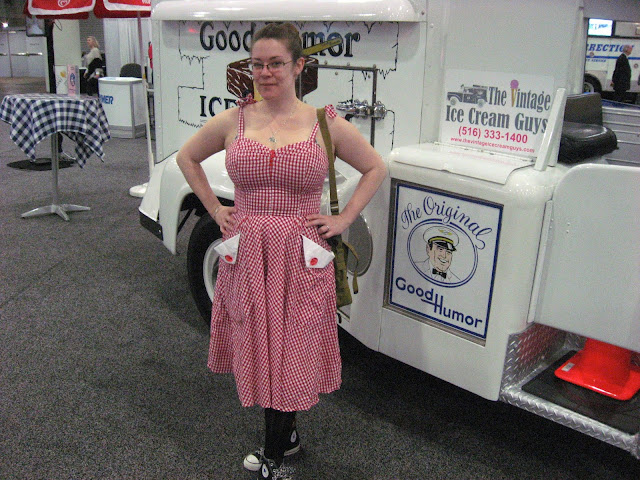 Fun fact: when I was a kid, my two dream cars were a Dodge Neon and a Porsche 911. Kids have no concept of money. 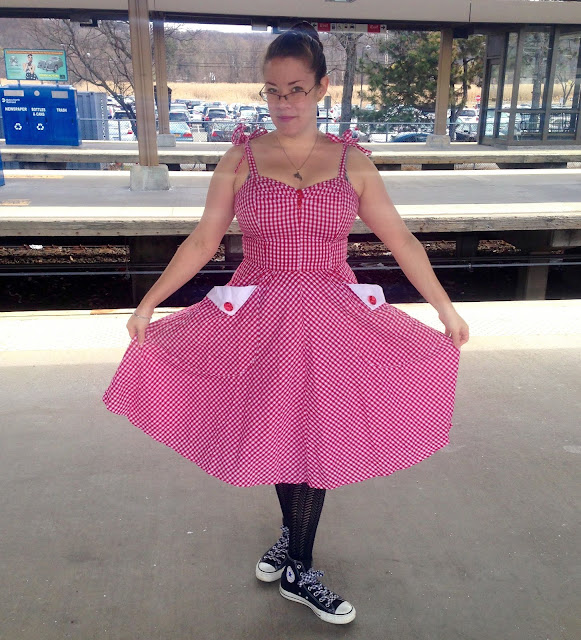 My high-tops saw a lot of action while I was at home, but I think high-tops with a sundress is a fun look.

It was about 70 degrees that day, so I wore my first-ever Trashy Diva dress and brought a sweater, just in case. I got this dress from Bristol and I love it! Gingham has completely captivated me recently, and as you might know by now, I love wearing red, and anything with pockets. The dress fits very nicely, and has a little bit of elasticated shirring on the sides, which makes it perfect for all-day comfort. I didn’t bring any of my petticoats home with me, but I like how the skirt of this dress falls even without anything underneath.

My sister Ronnie came into Manhattan with me, and we had lunch with my dad, one of his coworkers, and his coworker’s wife. Ronnie and I can be a little shy, but his coworker and his coworker’s wife were so incredibly nice and friendly that we felt at ease right away. We had a lovely time getting acquainted with them! After lunch, we all got bubble teas, and walked Ronnie to the New York Public Library, since she wasn’t coming to the Auto Show with us. 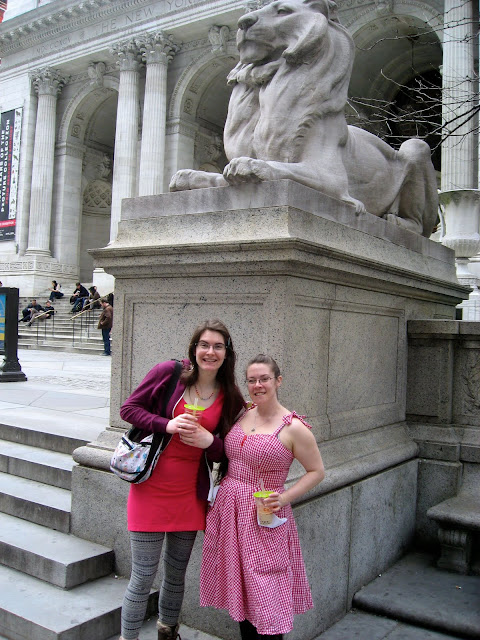 Finishing our boba before leaving Ronnie to explore the library. FYI: you have to request the books specially; they don't have regular stacks for patrons to browse. 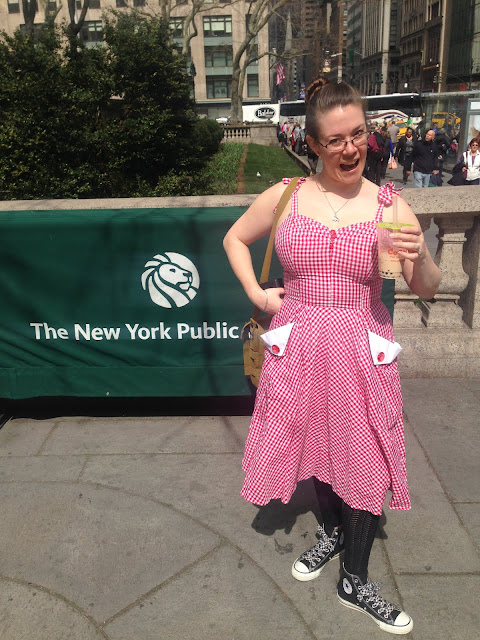 Super hype about my boba, the weather, and the auto show! 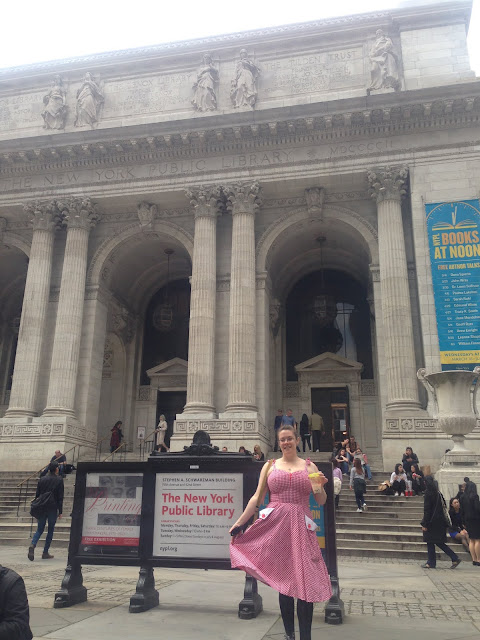 Me, standing in front of more mind-blowing architecture.

To be honest, Ronnie thinks most of my interests are barely acceptable at best (clothing) and terribly dull at worst (cars, NASA, Star Wars, political theory, and so forth), so when I asked her if she wanted to go, she said “I would, but I really don’t want to.”

After we dropped Ronnie off, my dad and I walked over to the Javits Center and went in. We started with the trucks, because they’re less exciting than the cars. We actually had an ’87 Mazda B2200 for almost 20 years, and it was a great car, but new trucks are way too big and way too luxurious for my taste. I’m not one of those short girls who likes to drive a giant car to feel better about how short I am: I like to be able to see the end of the hood when I’m driving, and I like cars with tight, sporty steering. I could see over the top of our old truck and load my bike into the bed on my own with no problem, and that’s what I like. We did like the redesigned Honda Ridgeline, though!

We spent most of our time on the car level, and I posed for photos in front of some of my favorites. I realize that photos of retro-style ladies with cars ought to involve classic cars, but this wasn't that type of show (though they had a few amazing classic cars from a museum in New Jersey.) My phone was completely full, so I had to trick it into taking photos by using the camera function in Instagram. This was suboptimal, since my dad has enough trouble using the regular smartphone camera app. I think his smartphone learning curve actually slopes downward. If you’re reading this, Dad, I’m sorry, but you know I’m also sort of right. 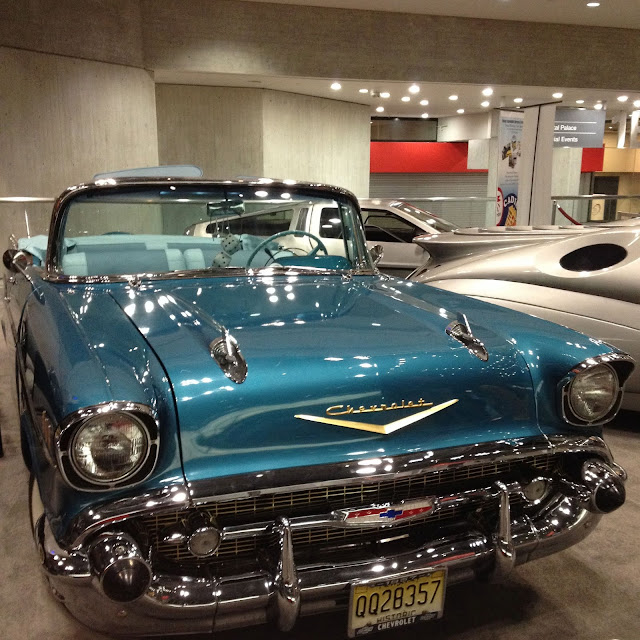 WANT. None of the photos my dad took of me in front of this '57 Chevy were especially useable, so you get to gaze at the car in all its perfectly restored glory, with no dress-wearing photobomber to block the view.
Has anybody seen those stupid Buick commercials where the people are like “that doesn’t look like a Buick!” even though they all TOTALLY look like Buicks? Yeah. This was a Buick concept car (meaning it’s not currently slated for production), and it actually didn’t look like a Buick! It would actually be a super cool car if they put it into production: it’s a coupe with a 300-hp twin-turbo V6, a crazy all-glass roof, and a dashboard display that looks like the future.
A Me-ata photo! (#sorrynotsorry) 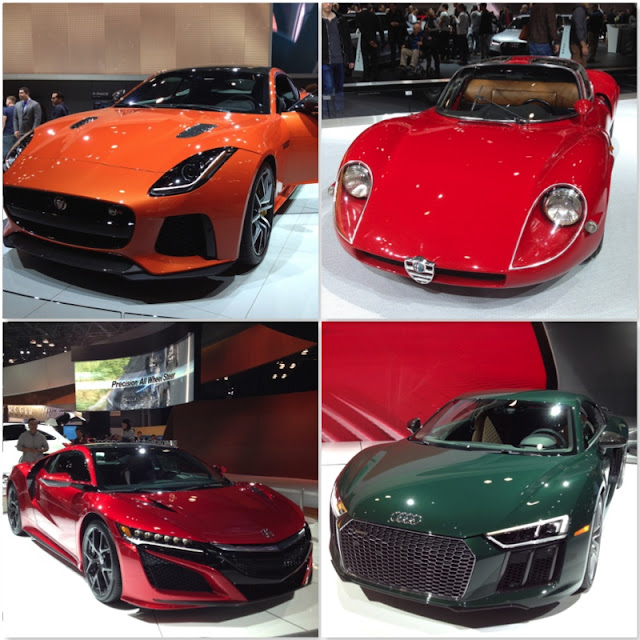 Some of my favorite ridiculously expensive cars: a Jaguar, a classic Fiat, a new Honda NSX, and an Audi R8.

The Mazda Miata is the perfect little convertible for me: it’s just my size, and Mazdas are my favorite cars! (Well, besides the brands that I seriously can’t afford…) I have a Mazda 3, which currently lives with my parents, and it’s been very good to me. Besides the Mazdas, I also quite liked the look and general feel of the upcoming Civic 5-door, the Kia Soul, and the Ford Mustang. 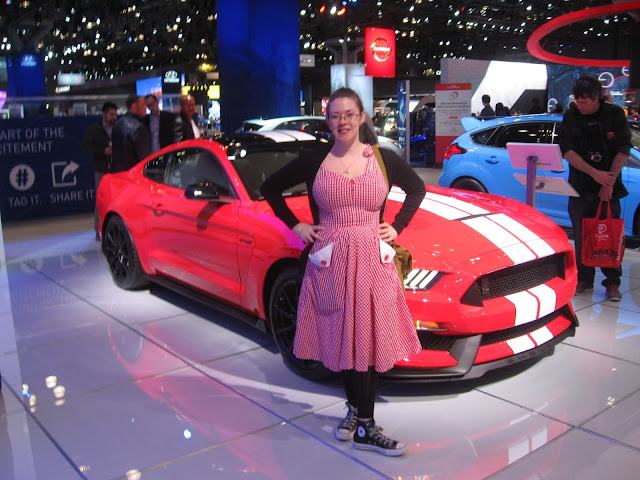 Reason 982734 that Mustangs are better than Camaros: when I sat in the Mustang, I could actually see the entire hood, whereas when I sat in the Camaro, I could only see from my eyes up in the side view mirror. Talk about a low-rider! I was Not a Fan.

We spent a good five hours looking around the auto show, and both had a great time! I'm still just so delighted that I had the opportunity to revisit an old tradition with my dad. We got home sort of late, so my mom and Ronnie picked us up at the train station and took us to a new diner for dinner. The diner had amazing food and the cutest neon signs, and they give you popcorn instead of a bread basket, so I was in heaven! 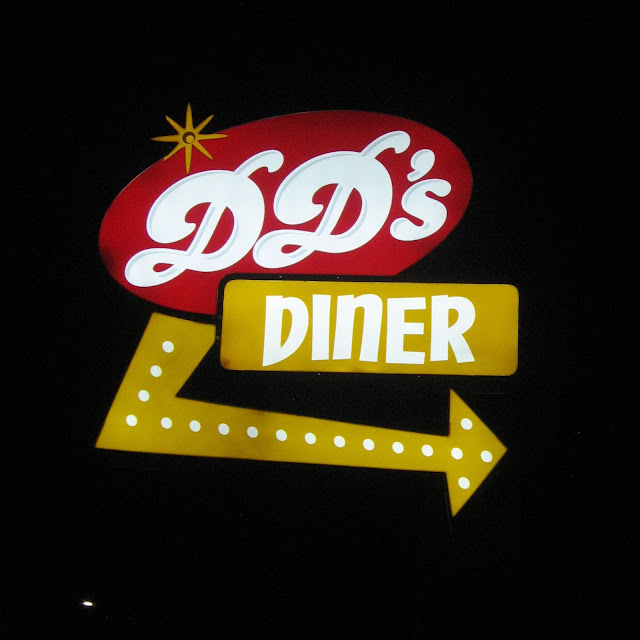