I'm writing this post sitting next to my sister Ronnie, which is possibly the most exciting event of my admittedly-short blogging journey! In fact, she helped me find the exact word I wanted ('journey') to conclude the previous sentence. We've had a super busy and eventful weekend, and I have a zillion pics of fun outfits and food to share with you. Friday was my mother's birthday, and we spent the whole day celebrating together! My dad took the day off, and we took my grandma to run a few errands and come out to lunch with us.

Since I spent eight years in graduate school/working as an adjunct in LA, I've typically come home to visit for long stretches at Christmas and in the summertime, so I have plenty of clothing that lives in New York. I was actually pretty happy to come home and wear this Lindy Bop skirt for the first time in ages. 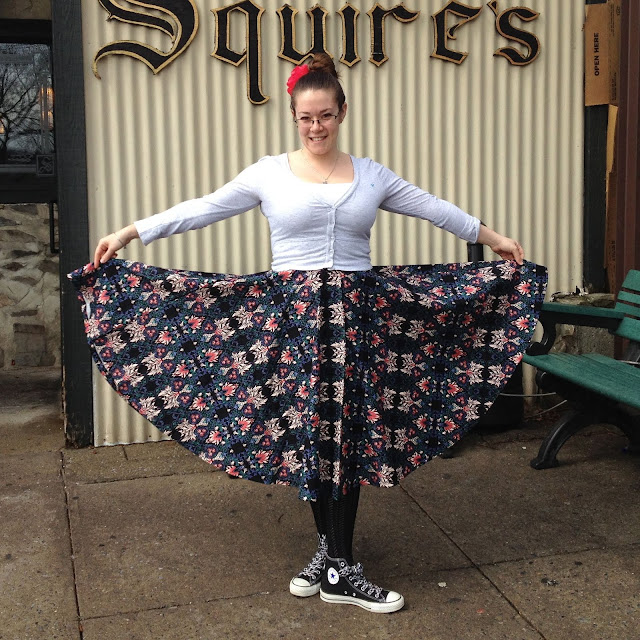 For lunch, my mother chose a pub-style restaurant that we've been going to for years. They make amazing burgers and French onion soup, and it's a really nice place. Fun fact: this place accidentally served my sister alcohol when she was twelve. She ordered a virgin pina colada, and after it arrived, she kept complaining that it tasted funny. I took a sip, but it must not have been very strong, because I couldn't taste the rum and told her to quit complaining.

She was so insistent that something was wrong, though, that my mother finally decided to try the drink. My mother hates alcohol and can spot it at 100 paces. My sister slid the drink across the table, and as soon as it was under my mother's nose, she took a whiff and announced "this drink has rum in it!" We called the server over, and when she came by, my mother explained that they'd made a mistake: it wasn't a virgin pina colada. The server apologized, and my mother goes "I bet you never served alcohol to a twelve-year-old before!" The server was mortified,  very surprised and apologetic, and probably at least a tiny bit nervous that they were about to lose their liquor license over a mistake. Obviously, that didn't happen!

Anyway, there was no alcohol involved in the birthday lunch, even though Ronnie is of age and then some. We did dress up, though. I gave my mom a red Peep brooch from Atomic Lucite first thing in the morning, and she absolutely loved it! She pinned it right on her jacket and showed it off to everyone we saw. 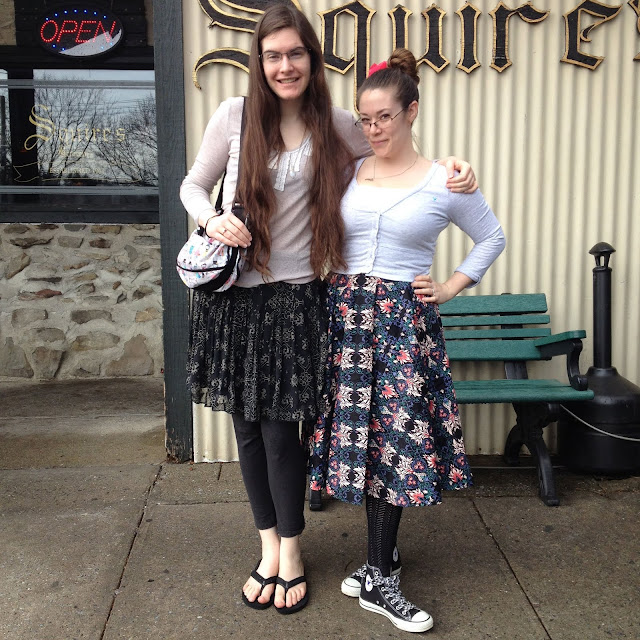 Ronnie made it through this entire winter without wearing real shoes. 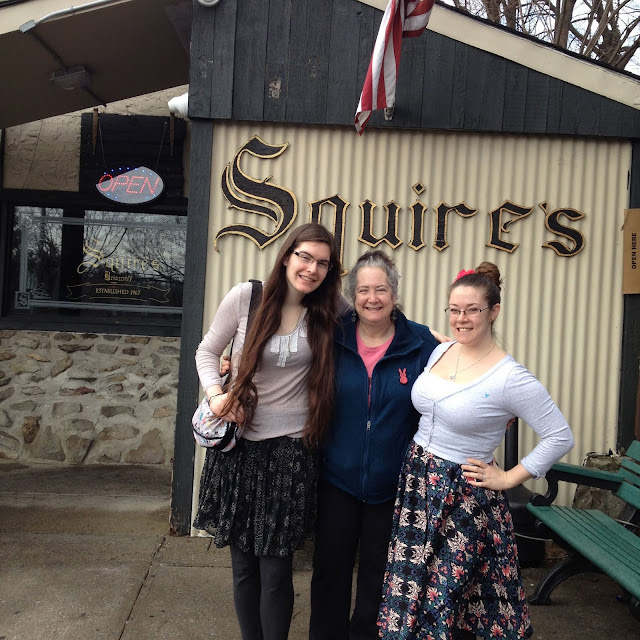 My father actually took this photo on a smartphone! I was suitably impressed, since he can't even unlock my iPhone.

The interior of the restaurant.

We had a really lovely lunch, and my mother was so happy! I didn't take any photos of the food because I was too hungry. What I did photograph, though, was the cake-making process. A number of years ago, Ronnie and I made the most perfect birthday cake ever: a Funfetti cake, covered in candies and Peeps! 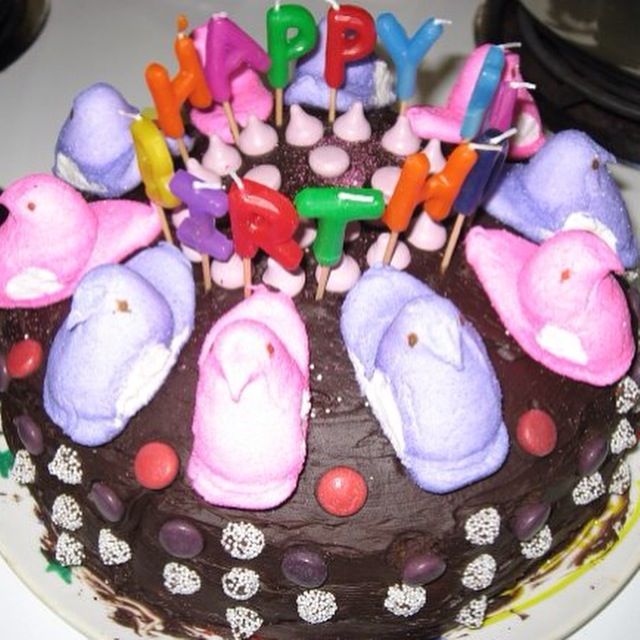 This year, Ronnie and I decided to recreate the Peep cake, only this time, we decided to make homemade buttercream frosting! My mother is a butter fiend. We have a running joke about how my mother 'frosts' her bread with butter, rather than simply just buttering it, because she uses so much butter on each slice of bread. I make a cake with buttercream frosting for Jeff's birthday each year, and every year when I tell my mother about it, she says she wishes she could try it.

I've gotten really used to cooking alone, but cooking with Ronnie is such a treat! It's so much more fun when she's there, and everything goes so much faster when you've got a partner in the kitchen. Homemade buttercream is approximately 10,000 times more delicious than frosting from a can, but surprisingly, it's one of my least favorite things to cook. Confectioner's sugar gets everywhere and I hate making messes in the kitchen because cleaning is the worst. However, my sister is sort of a messy person, so her idea of 'intolerably messy' is quite a bit different than mine, and she made fun of how distressed I was by a tiny bit of powdered sugar. (Upon reading this paragraph: "It was literally like four grains and she was freaking out, but it was like microscopic…" - Ronnie). She also cleaned up, though :).

We were pretty pleased with the final result! 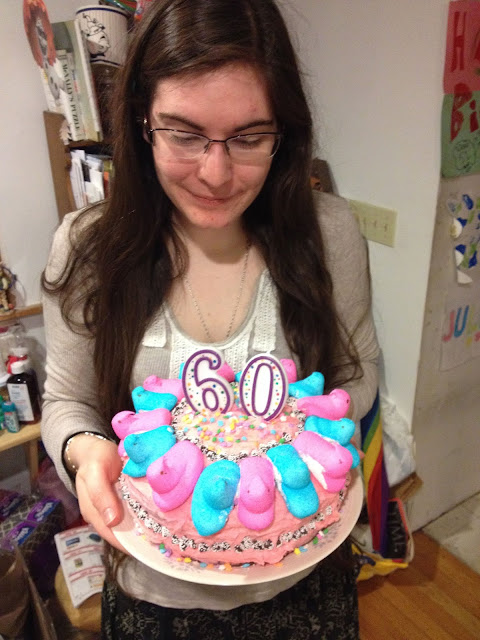 Woohoo! We were going for red frosting, but ran out of red food coloring. I think the pink actually looks better with the Peeps than the red would've. 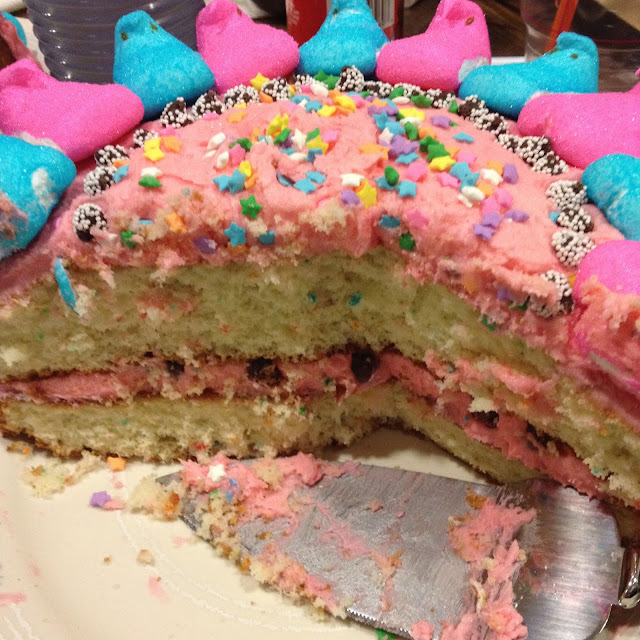 We are champion eaters in my family!

My mom is a very casual dresser: she has a full wardrobe of Sesame Street character shirts, which delight her nursery-school students. However, she absolutely loves hair flowers. They're her signature accessory, so much so that when I went outside with a hair flower in my hand, intending to put it into my own hair, my two-year-old goddaughter spotted it and said "That's for Janie [my mom]!" Because she loves hair flowers so much, I decided to get her a few for her birthday. I ordered some from Daisy Jean and they arrived just in time. I wish I had taken a photo of her face when she opened her present and saw them! This one will have to suffice, though: she immediately put all three flowers on and wore them all weekend. 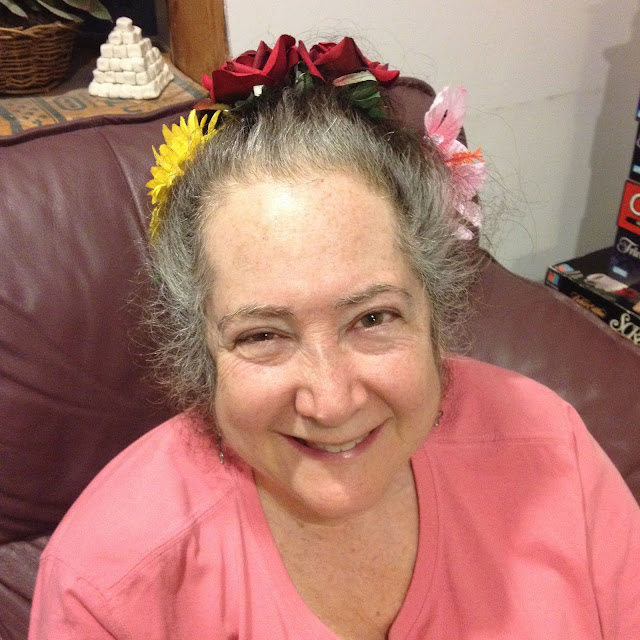 Super happy and full of cake!

I'm so glad I was able to come home and celebrate with my family!

What's your favorite way to celebrate a birthday?

Facebook
Google Plus
Bloglovin'
Posted by Emily at 6:06 AM