Credit where credit is due: I stole the pun from my cousin. He is peerlessly punny.

I've been super busy since last Thursday, doing all sorts of fun stuff. It's a nice change of pace from my adjunct days, when "super busy" meant "prepping classes, teaching, and grading until 10pm every day." Jeff and I had an amazing Chicago adventure this weekend (post coming soon! Well, soonish. I have too many outfits to post first!), and my cousin was in town visiting his girlfriend, so I had a fun evening with them and some of their friends.

Friday was the world's longest day, because I inexplicably woke at 4am and couldn't get back to sleep. But since all 22 hours I spent awake were pretty awesome, and I liked my outfit, it was a major success! I met my cousin and his girlfriend at their friends' place, and we cooked an epic dinner and watched old episodes of Top Chef and Samantha Bee's new show. 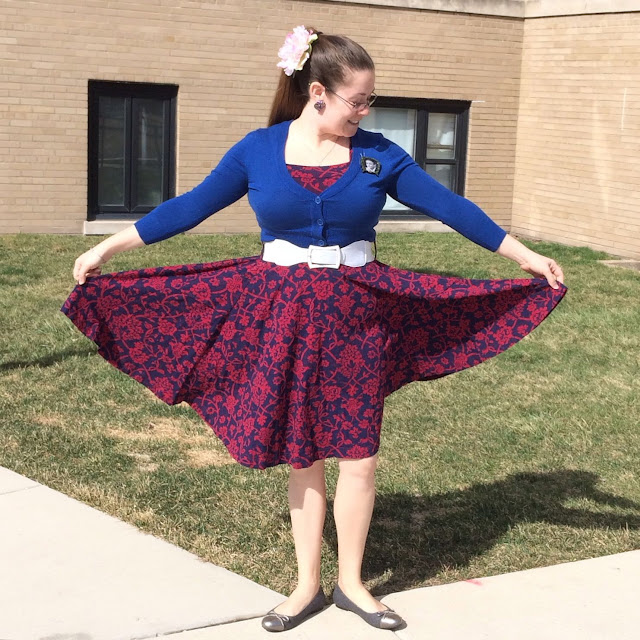 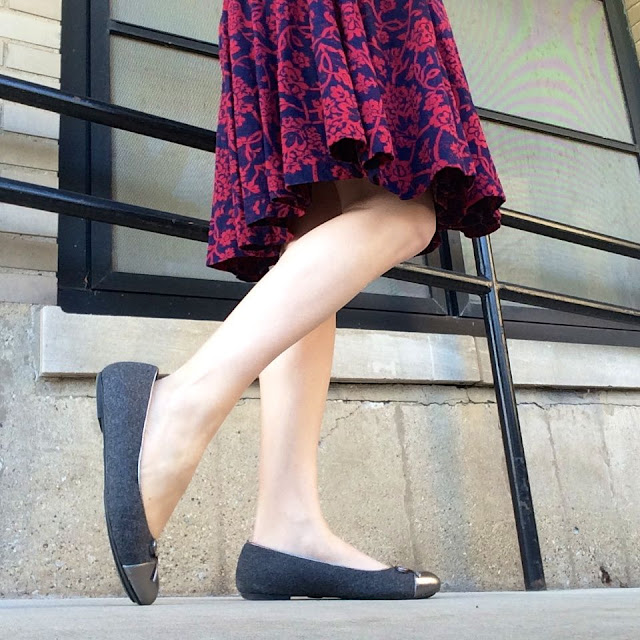 I finally found a spot to rest the camera for a shot like this. It was everything I'd ever dreamed it would be. 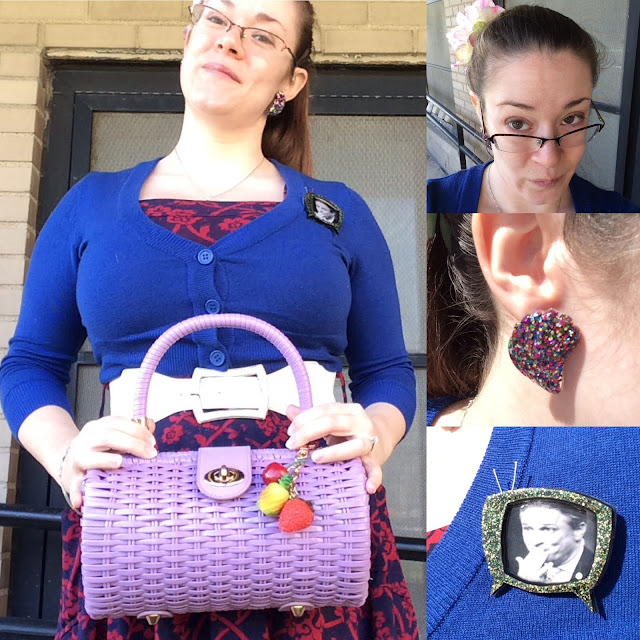 Effie's Heart makes fantastic dresses: they're comfy, super flattering, come in fun prints, and allow for gluttony! I wore this dress for about 18 hours on Friday, and didn't feel at all tired of wearing it by 2am when I finally got home. The dress comes with a matching sash, but I liked how it looked with the white belt a lot more. I'm really into wicker purses right now, and this one from PUG is absolutely gorgeous!

This post also marks the debut of my custom Jon Stewart brooch from Atomic Lucite, which is actually the best thing ever. With it, I can sort of pretend that Jon never left my TV! This was the first piece I purchased from the other half of Atomic Lucite's dynamic duo, and I can now report that they are both absolutely top of the pops when it comes to making amazing things!! She sent me a surprise pair of matching earrings with my beloved Jon, which was super exciting! They're teardrop-shaped and have FACETS. Mind blown. On Friday, though, I wore another pair of Atomic Lucite earrings, since I hadn't worn them out yet. I just placed another Atomic Lucite order this morning, because they are creative geniuses.

Now that you know what I wore, here's what I did!

I headed up to the North Side for dinner, having swapped out my flats for tights and knee-high boots. Jeff stayed home sick, which was the only bad thing about the evening. We had all been following the story about Trump's scheduled appearance at UIC, and the protests against his visit. I haven't been writing about my personal politics on the blog, but if you've seen my 'feminist' brooch, you probably would've guessed that I'm not a Trump fan. UIC has the highest percentage of students of color in the University of Illinois system, so the idea of a race-baiting xenophobe appearing there, instead of at his phallus building on the Chicago River, just seemed… off. Our dinner wasn't actually a formal anti-Trump event, but we were all pretty stoked that he chickened out, and every post needs a title.

My cousin's friends, the hosts of our amateur Top Chef night, were super welcoming, and had an adorable almost-three-year-old daughter named Lucy, so I had someone to interact with who was right on my level ;). My cousin was the chef de cuisine of our meal, which was strangely confusing for me. I'm used to being the air-traffic controller for big family meals at my parents', so it was a change of pace to act as sous chef. I was actually a pretty lousy sous chef, too, because Lucy and I had important things to do, like look at her toy animals and eat raisins. She taught me some sweet moves from her ballet class, too!

My cousin had a grand vision for dinner, and I think the execution was totally successful. We made a ton of food, and it was a delight to cook with other people! On the menu: chicken braciole with marsala sauce, cauliflower au gratin, sweet potatoes, and monkey bread. It was the first time I'd ever had monkey bread, but definitely not the last! The one task I completed from start to finish was the cauliflower, which I was put in charge of. I'm pretty proud of my contribution: the idea of putting cheese in the cauliflower and sticking it in the over to brown. 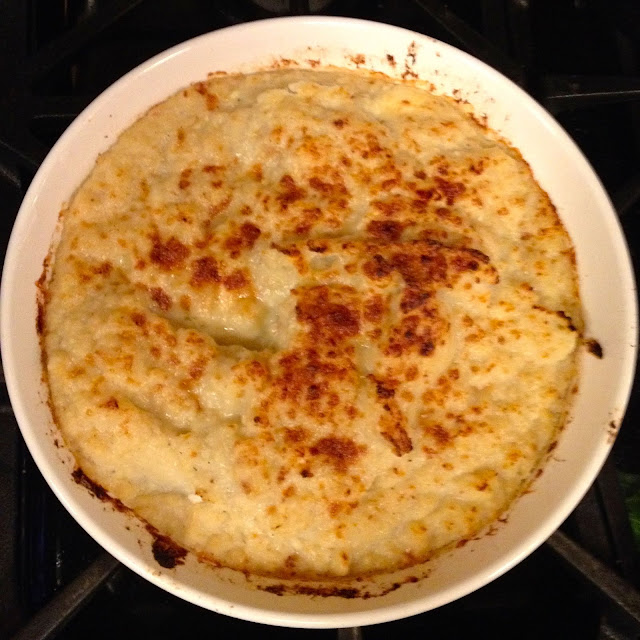 Everything is better with cheese! 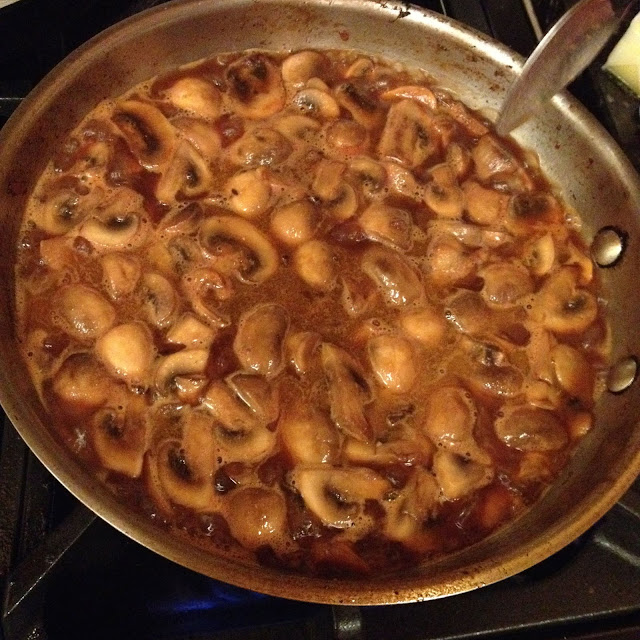 Marsala sauce with all the mushrooms! I cut these up, with 'help' from Lucy. 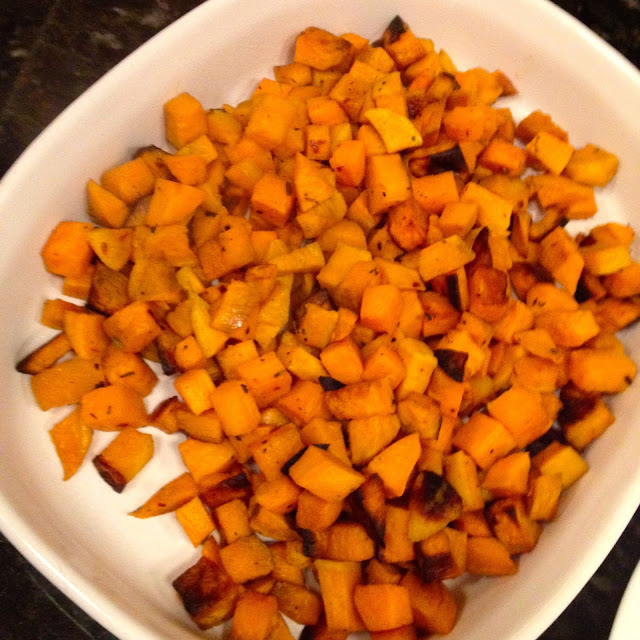 Sweet potatoes, which were amazing! 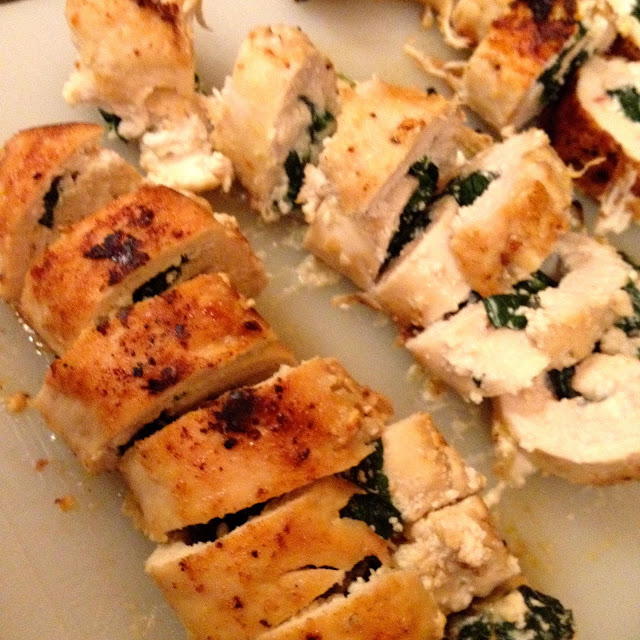 The best-looking of the sliced chicken braciole. I jumped the gun a bit on slicing some of them. Apparently, they stay together better if you let them cool a bit. 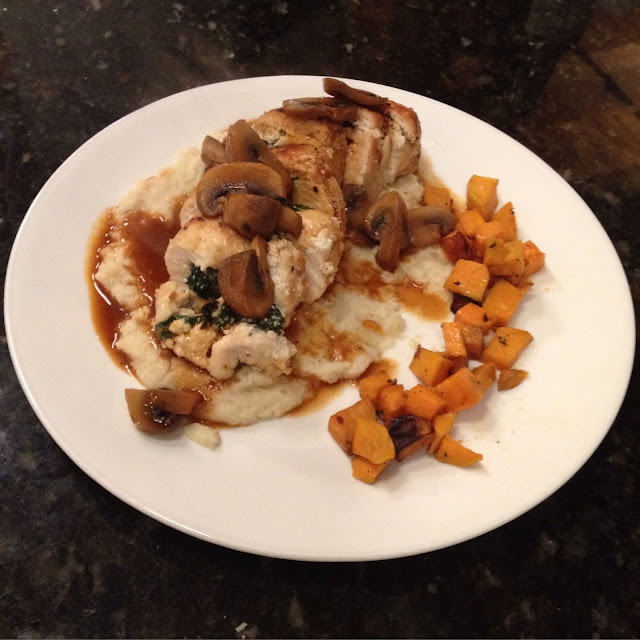 My cousin's genius plating design (aka my dinner plate.) 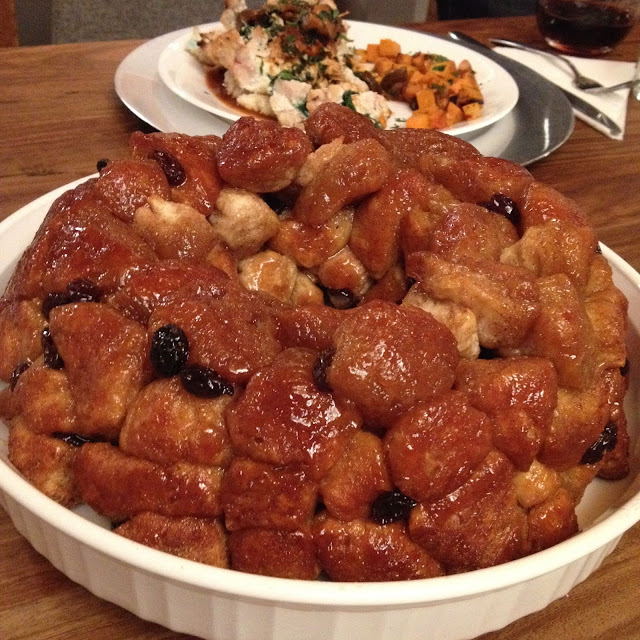 This is probably the most delicious use for those tins of Pillsbury biscuits ever!

After dinner, we hung out and I ate the monkey bread until I could no longer sit up straight. We watched a couple episodes of Samantha Bee's new TV show, and it was so good! I haven't really been watching the Daily Show since Jon Stewart left, since I've been seriously underwhelmed by Trevor Noah, but her show (along with my brooch!) will fill the void in my heart a little.

As I often do, I forgot to take a selfie with my cousin, but I snapped a shot of him and his partner when we were waiting for our respective Blue Line trains: 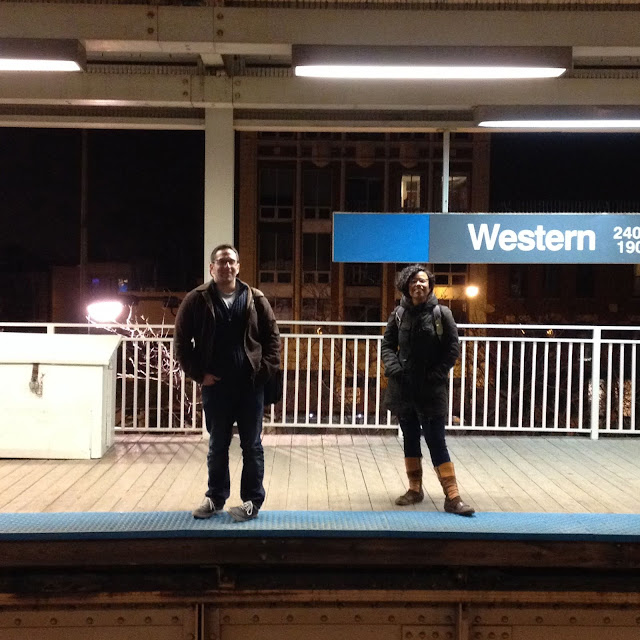 Jeff picked me up at the train station when I finally got home, which was great, as a 20-minute walk at 2am when I'm stuffed to the gills was not appealing. He's a keeper!

What's your favorite late-night show?
Posted by Emily at 6:41 AM