Summer birthdays are a mixed bag. On one hand, I've never had to go to school or take an exam on my birthday, which is a significant plus, and I share my birthday with one of my favorite historical events. On the other hand, it is always approximately eight thousand degrees on my birthday, and generally pretty humid to boot.

This year's birthday was no exception to the rule. It was too hot to dress to the nines (i.e. in a full skirt with epic petticoat underneath, and properly styled hair), but on the bright side, it didn't thunder or rain on me! I'm calling that a win. 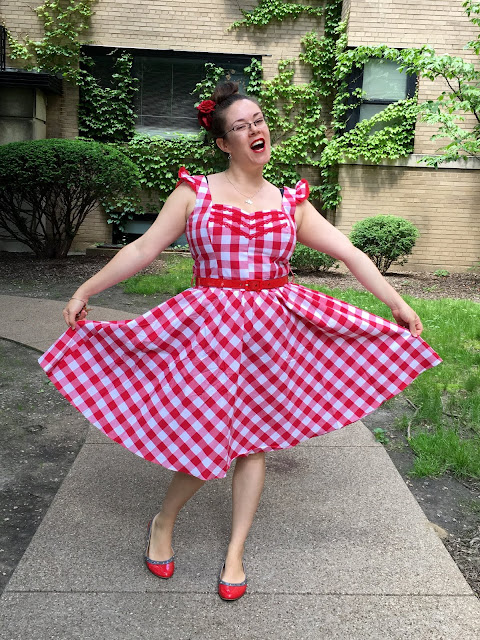 I'm slightly obsessed with gingham, and wanted this lovely Bernie Dexter dress for ages, so when I saw it on Zulily, I snapped it up even though it's a size too big. The sleeves/straps are too long, the pattern doesn't quite match up on the bodice, and it's sorely in need of altering in the waist, but I'm willing to overlook all of those things because the rickrack on the bust is just so cute. Someday I'll actually get it altered, but until then, it's the perfect dress to wear for a day of serious eating. 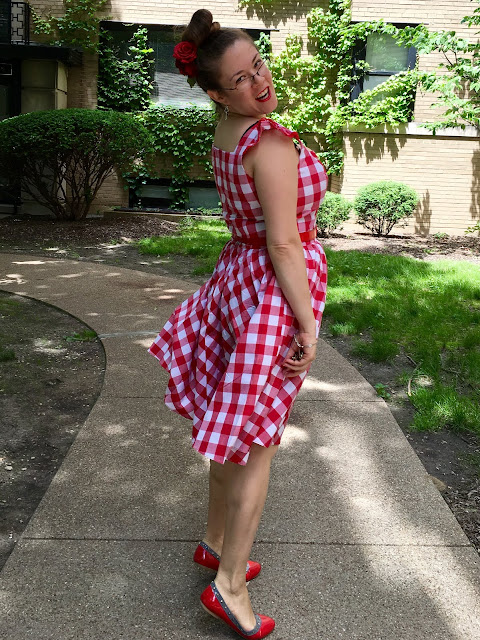 For this photo, I tried to channel Bernie. My efforts were met with serious resistance (blowback?) from the wind. 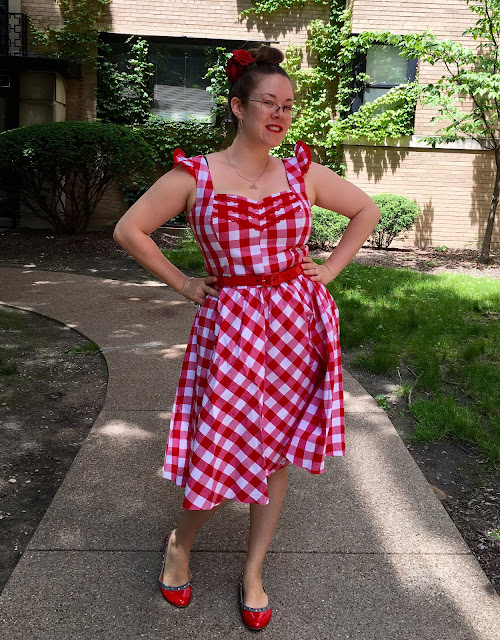 We celebrated my birthday in typical fashion: a combination of epic nerd-ing and a ridiculous quantity of food! Since previous birthday celebrations have revolved around visiting the Space Shuttle at the California Science Center and taking a trip to the Nixon Presidential Library, it wasn't a surprise that we started off at a museum. I saw some exhibits I'd never been to, which was great, as well as one of my favorites. 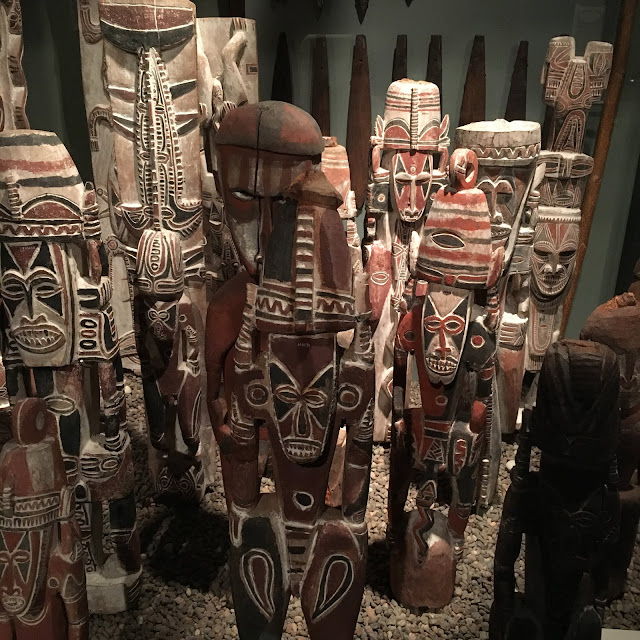 My first trip to the Hall of the Pacific. If I'd known what I'd see, I would've dressed to match the exhibit.

Despite being from non-barbecue states, Jeff and I are both huge fans of barbecue, so when he mentioned a place he'd heard about in the West Loop called Green Street Smoked Meats, I thought it sounded perfect for my birthday bacchanal. How could I resist a place that offers pork belly by the pound?

Some of my favorite Chicago restaurants (thus far, at least) are in the West Loop, and since it's a trendy neighborhood right now, we went for an early dinner. (*nervous cough* it's not like we always go out to dinner at Old People O'Clock or anything like that…) Green Street Smoked Meats is fairly close to the Green and Pink line, but that didn't stop me from complaining about how hot it was for the entire walk. Once we walked in and smelled the smoke (and felt the soothing touch of industrial-strength air-conditioning), though, all was well. 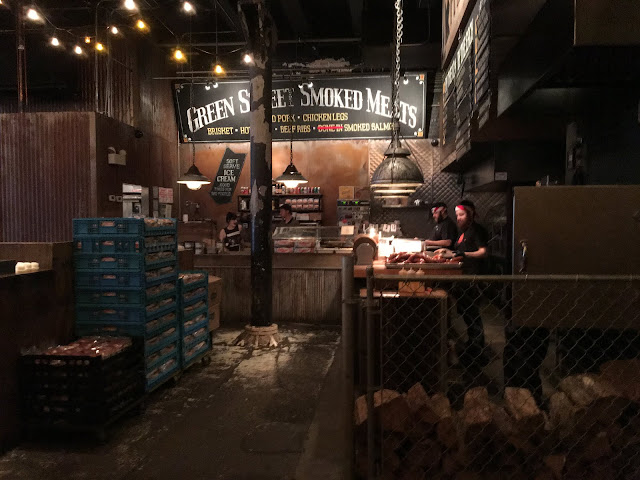 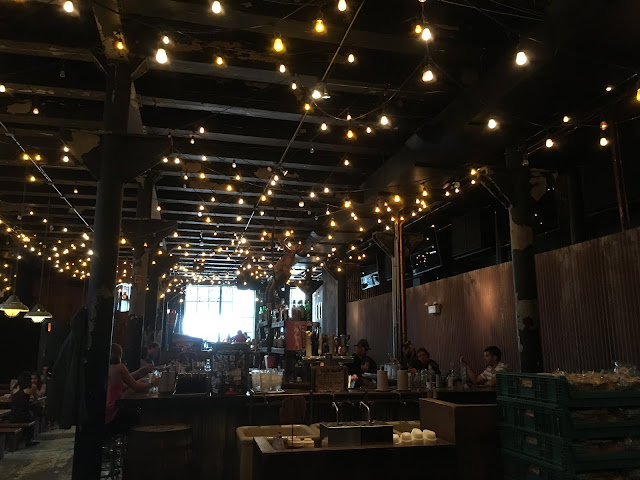 Advantages of eating early, part 2: no one to stare judgmentally at me while I photograph things!

When Jeff and I go out to eat, we take a snake-about-to-swallow-a-bison approach: we don't eat much all day and then order All the Things. In this case, we ordered a pound of brisket, a pound of pork belly, two massive hot links, cole slaw, and a watermelon salad. I think the guy behind the counter was skeptical that we'd actually be able to eat it all. (Challenge accepted!) They had plenty of delicious-looking sides, but we didn't want much to distract us from our carnivorous rampage. 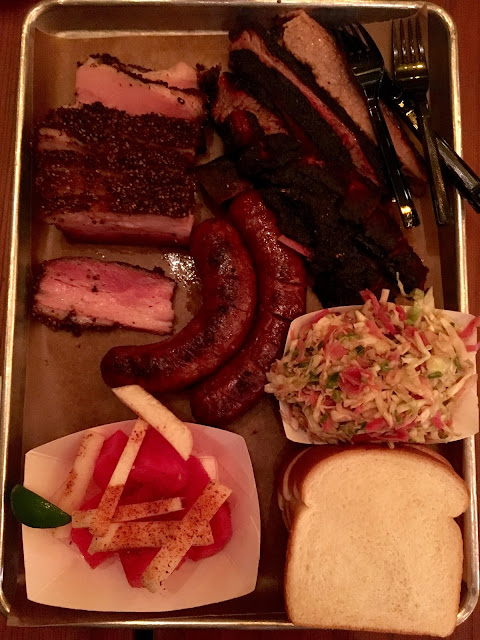 I cannot describe to you the delight that is perfect brisket, but if you'd like to experience it for yourself, you'll need to go to this place. Jeff and I agreed that this was the best barbecued brisket that either of us have had (disclaimer: we've never had it in Texas). It was so good that I actually warned Jeff off of taking any of the burnt-end-like pieces that I'd mentally claimed for myself, which is something I literally never do. Both of us went there expecting to like the pork belly best (because it's bacon, for crying out loud), and while the pork belly was itself a quasi-religious experience, the brisket was even better.

The hot links were also delicious. I'm usually not especially interested in sausage at barbecue places, since I'd rather focus on pulled pork and smoked beef, but these held their own on a tray that included epic brisket and pork belly. The coleslaw was also delicious: I'm not a huge fan of mayonnaise, so it was great to have a vinegar-based option. I may or may not have cracked jokes about the "vinegar bite of the coleslaw cutting through the unctuousness of the pork belly" that only a dedicated Food Network viewer would find amusing. I loved the watermelon salad, which came with chili and lime juice, but that shouldn't surprise anyone.

Lastly, the bartender carded me (a nice compliment when you're a decade past your 21st birthday), and when I blurted out "it's my birthday and also the anniversary of the moon landing today!", she gave me my drink on the house!

If you love Serious Meat the way I do, you seriously need to check this place out. 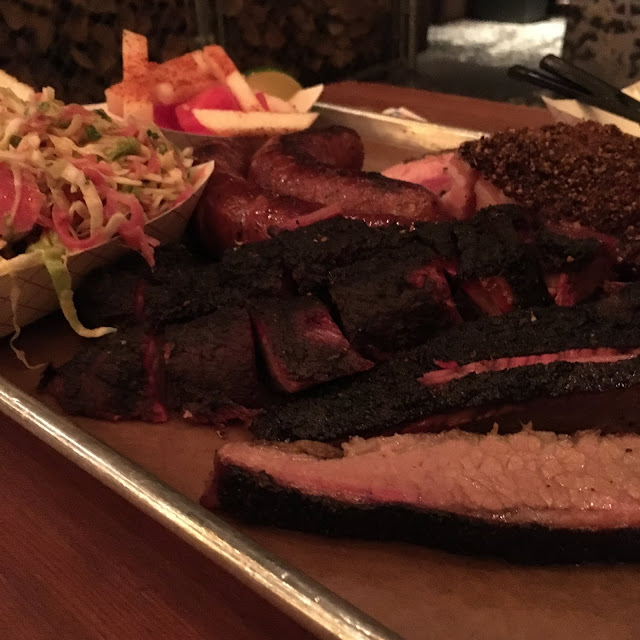 After that, we went to the French Market for macarons. None of the cake options there were really speaking to me, so we headed to Magnolia Bakery and went to town on the perfect Funfetti-esque dessert. All throughout the day, I couldn't stop grinning and telling Jeff that I was having the best day ever, and the massive sugar rush was the perfect end to the day. 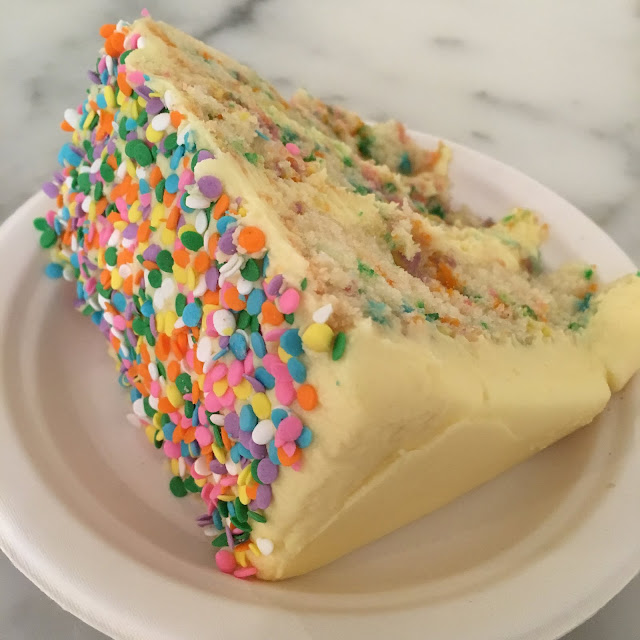 How do you like to celebrate your birthday? Do you have any special birthday traditions? (To me, 'eating a ton' counts as a tradition!)

Facebook
Google Plus
Bloglovin'
Posted by Emily at 5:39 AM

Email ThisBlogThis!Share to TwitterShare to FacebookShare to Pinterest
Labels: Bernie Dexter, Chicago, restaurants, what I wore