The Best Burger of My Life

Last week was Jeff's spring break, so we did more than the usual amount of Chicago adventuring. We went back to Navy Pier (post coming soon!), tried out a Chinese restaurant I'd been interested in for a while, went out for dinner in our neighborhood, and had the best burgers I've ever had in my entire life. I'm a hyperbole-prone person, but for once, this is not an exaggeration.

I'll get to the food in a minute, but first, here's what I wore: 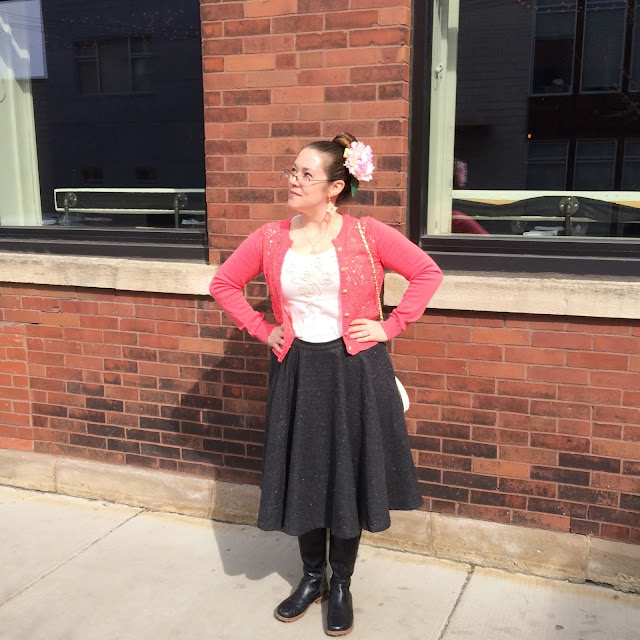 Everything in this outfit is either something I've had for a long time, or something I got secondhand. The skirt came from the fabulous Miss Amy May, the cardigan is from the brilliant woman behind Femme De Bloom, and the purse is vintage. It was a blustery, chilly day, so I was quite glad to have a comfy wool skirt to wear! It's especially nice to have pockets when I'm gallivanting around Chicago, since I like keeping my phone at hand for any emergency photo opportunities (e.g. funny signs, pretty views of tall buildings, especially fluffy clouds, etc.) 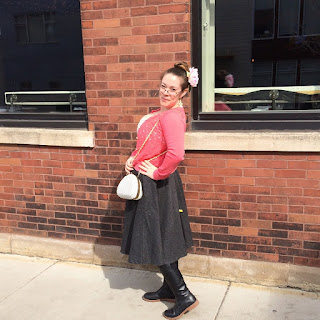 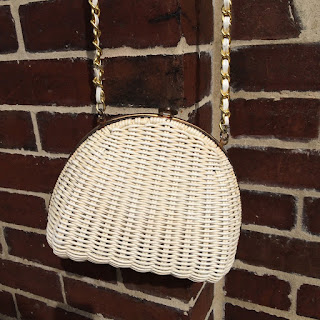 Jeff was so patient while I posed for these photos/slung my purse on a brick wall to get a neat photo! 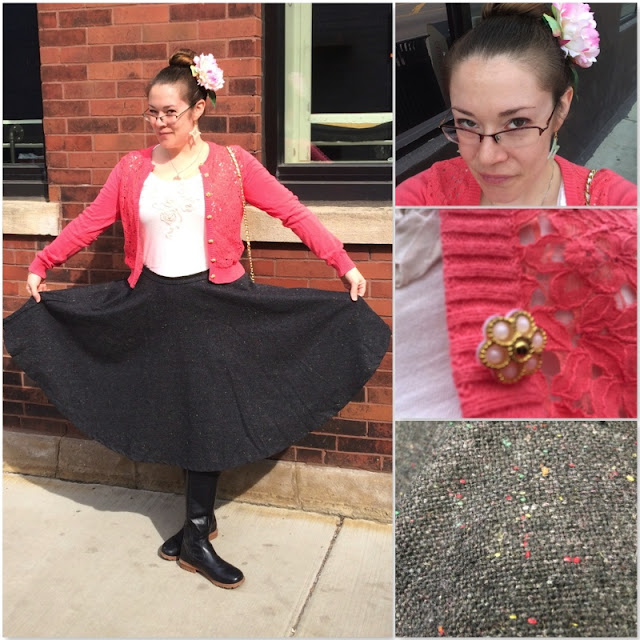 I just love the buttons on this cardigan. And you can't see them very well in this photo, but I'm wearing my newest Atomic Lucite earrings! 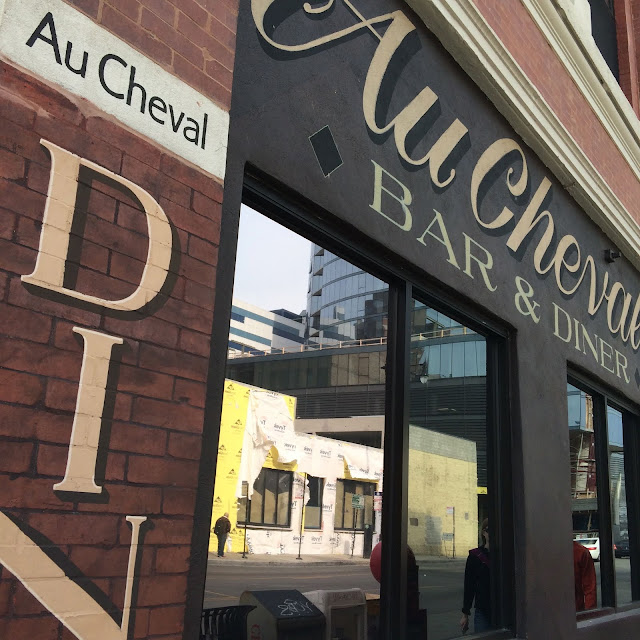 You can see the gentrification of the West Loop reflected in the window!

If you ever find yourself in Chicago and feel like having an utterly sublime burger, you must try Au Cheval. Jeff saw it on a TV show about the country's best burgers. I was skeptical about this claim at first, since I've had a lot of burgers and there really isn't that much variation, quality-wise, among reasonably good burgers. After this meal, though, I was 100% Team Au Cheval! I cannot for the life of me figure out what made this burger so much better than all the other burgers I've had in my life, but it was honestly just transcendent.

We had heard that this place gets pretty crowded, so we went for a very late weekday lunch, arriving around 3:30. Normally places are empty at that time, but when we walked in, there was only one empty table. I hate waiting when I'm hungry, so this was fortuitous. Au Cheval's food menu is what I think foodies might call 'carefully curated,' but real talk, you don't need to look past the burger. They have a pretty long beer list and some fancy cocktails, but as we were having burgers, we stuck with beer. They had my favorite one from college on tap! 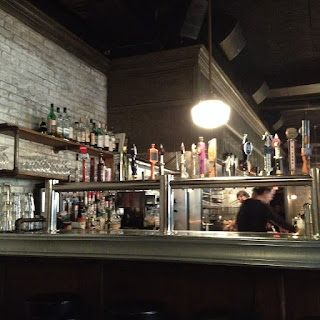 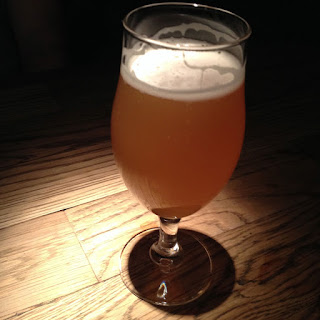 Ah, Weihenstefaner. I ordered you like a total tool of the 'I speak German and I'll pronounce it properly' variety. #noregrets 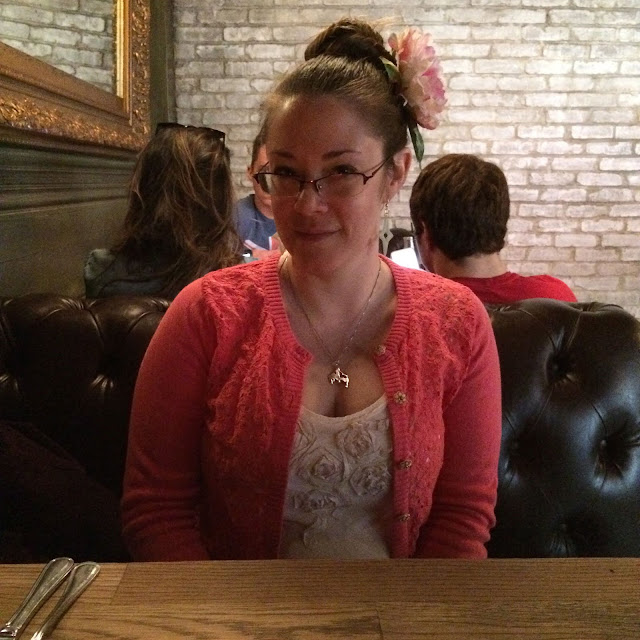 I have yet to master the low-lighting shot, but Jeff made a valiant effort here!

I ordered fries with my burger, and Jeff got the smashed potatoes, which came with a truffle gravy. Both were delicious, but the true hero of the day was this beauty: 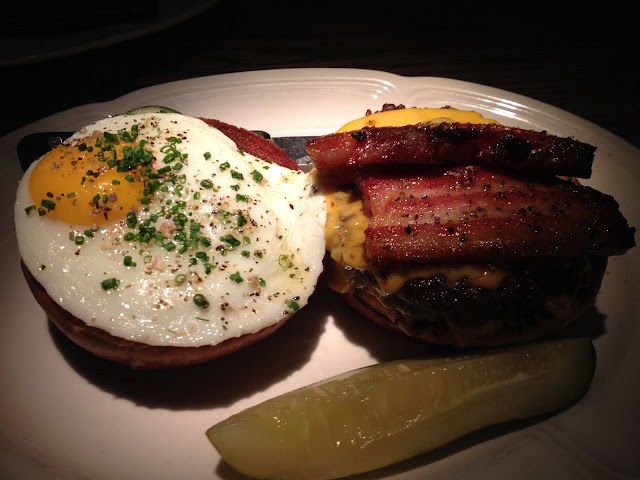 Fried egg and massive slabs of bacon, because I DO WHAT I WANT!

The 'single' cheeseburger at Au Cheval comes with two patties, as I discovered when I tried to order a double. I was quite glad that the server warned me! After the previous week's Polish-buffet bacchanalia, I don't think my gut was quite ready for another busting. Jeff went for the three-patty double, though, because he has the heart of a champion. We both went for the fried egg and bacon, which was a brilliant choice. The bacon was at least a quarter-inch thick, and I think it had been caramelized with something delicious to boot! You can't see it in the photo above, but under the fried egg, there were tiny red onion bits and delicious thinly-sliced pickles. 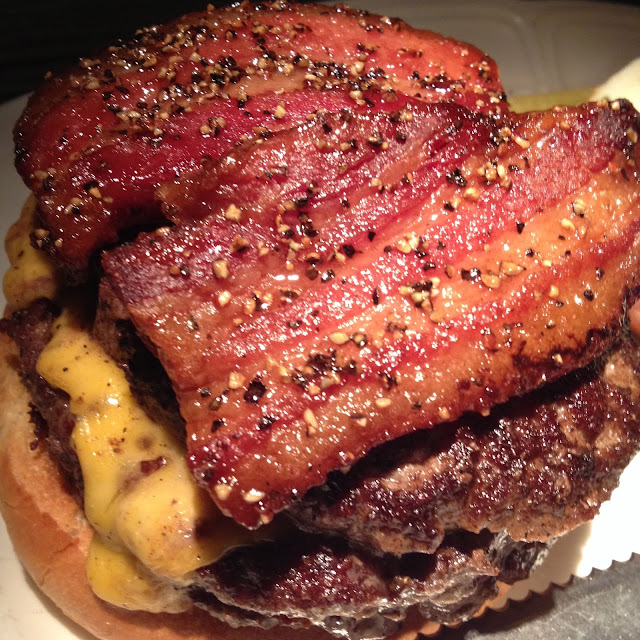 After our burgers arrived, the only things I was able to do for the rest of the evening were 1) talk about how amazing the burgers were and 2) talk about how happy I was. It's sort of sad, actually: the better the meal is, the worse of a conversationalist and dinner partner I become. Jeff is used to it, though.

After dinner, we went over to the French Market and walked around for a bit. It's a pretty nifty place: there are a bunch of food stalls, a few jewelry and gift stands, and a place to eat, and it's all attached to one of the commuter-rail stations. 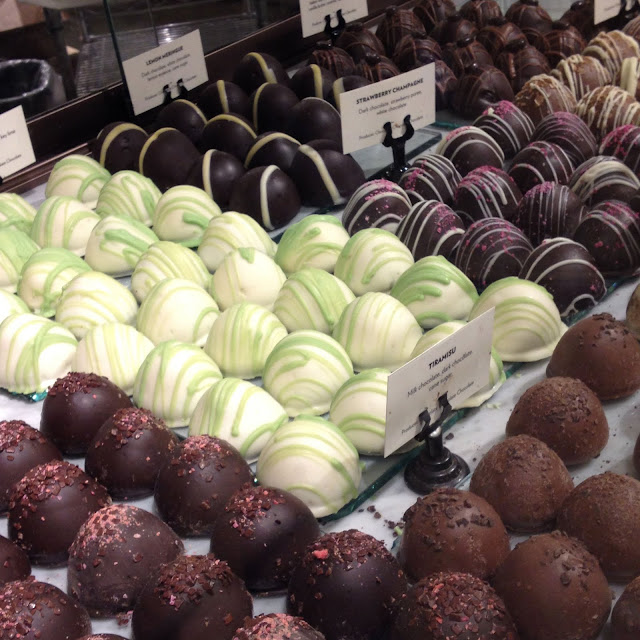 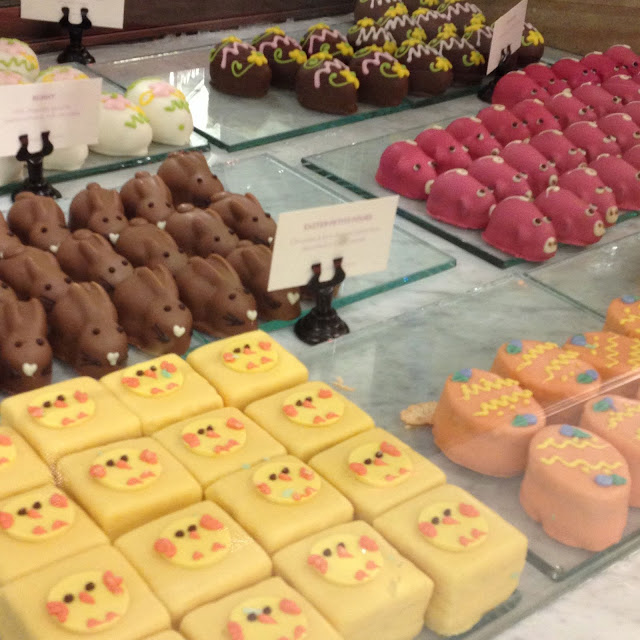 The chocolates and pastries looked especially appealing, but we ended up just getting a couple of macarons to take home. This was an uncharacteristically wise choice, as we were pretty full from our dinner. All in all, this was one of the most exciting Chicago adventures I've had!

What's your perfect day out?
Posted by Emily at 6:01 AM