Today's post was supposed to be my review of the Girl and the Goat, a restaurant that the entire Chicago world seems to be freaking out over, but it's apparently so popular that you have to make reservations a month in advance. Luckily, Jeff called to ask them about a reservation before we left the apartment, or else the sum total of the post would have been "we trekked out there and it was too busy, and then I cried."

Instead, we decided to go back to Paddy Long's and eat All the Bacon Ever. I've talked about this place on my blog before, but it was just as awesome the second time, so I'll talk about it again.

First, though: a photo of the Perfect Dress for Eating Everything! 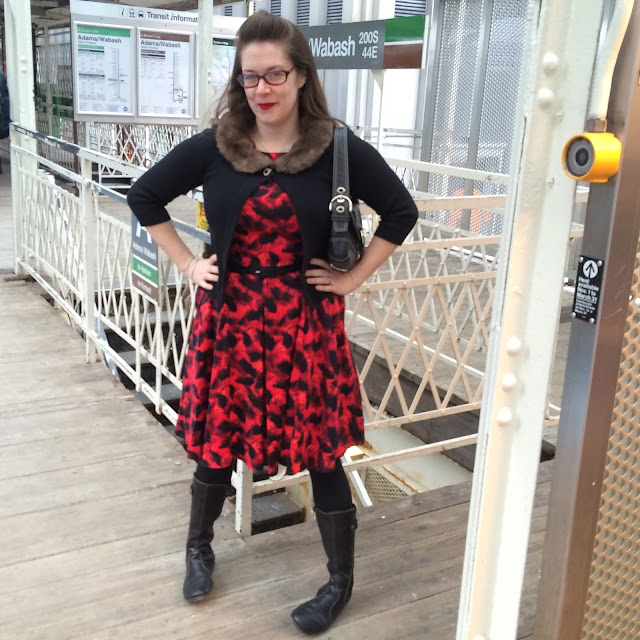 I got this dress at Ross Dress for Less last September, to wear to a reception for new faculty that I went to with Jeff. Let me regale you with its merits:

1) It's comfortable and work-appropriate
2) It's red!
3) It's super flattering
4) It has POCKETS!
5) It's machine washable

Since I've worn this to a few receptions already, I knew it was a good choice for a gut-busting meal, and I wasn't disappointed. I did have to take off the belt and stick it in my purse after the appetizer round, though. 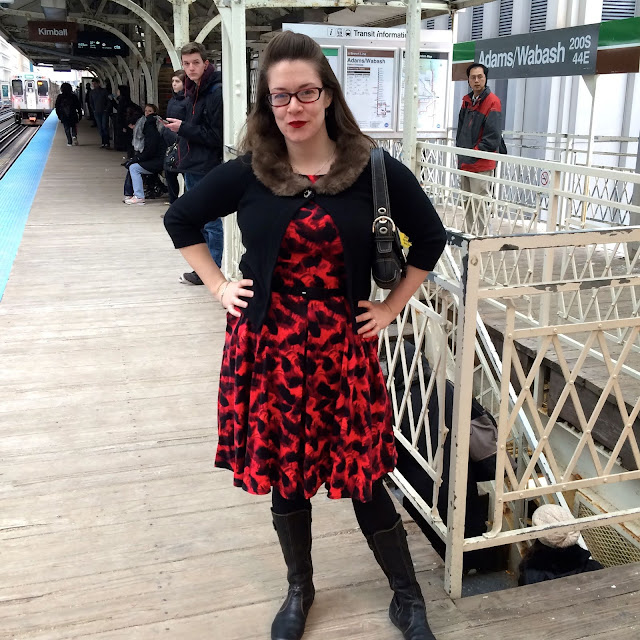 I read enough blogs to know that  your photos are supposed to create the illusion that you're the only person in any given spot, but my photographer does not.

When Jeff told me that we wouldn't be able to get a table at Girl and the Goat, he also suggested that we go back to a place we've already tried from his restaurant list, and started listing a few options. As soon as he said Paddy Long's, I yelled "YESSS!" and pumped my fist in the air like a loser. I tried to play it cool afterward, and be all "well, we can go anywhere you like," but it really wasn't credible, so we were off to Paddy Long's! 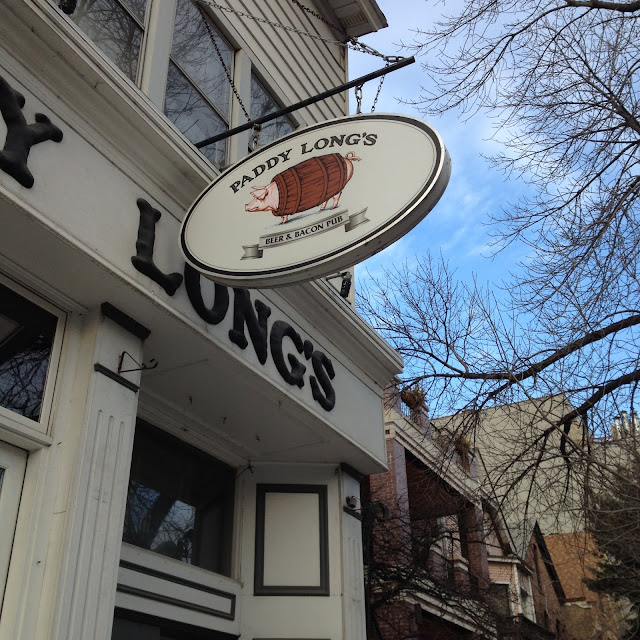 It's a good omen when a restaurant has a pig in a barrel on its sign. 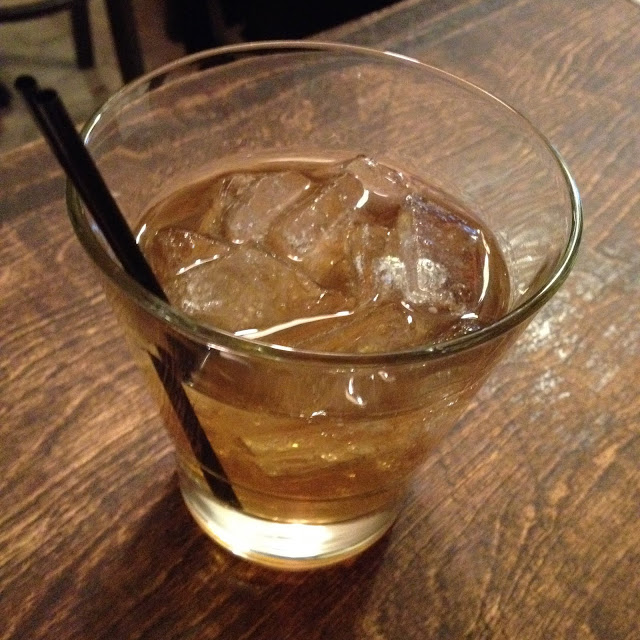 Jeff got a bacon Old Fashioned, so I quoted the South Park episode about the Food Network for two hours.

We got a truly staggering assortment of artery-clogging dishes. It was an over-the-top meal, even for us. We ordered the deep-fried bacon (because why pass up an opportunity to make bacon less healthy and more delicious?!?) as well as the 'bacon grenade' appetizer, which was sausage wrapped in bacon and deep fried. 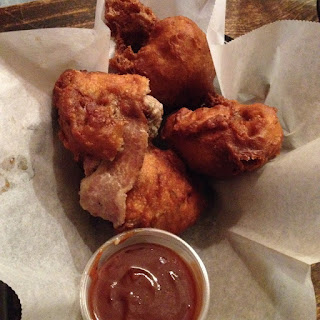 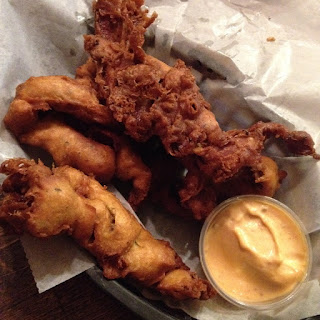 I also ordered the 'Moo and Oink' burger, and added a fried egg. There is actually nothing more delicious than a burger with a fried egg and tons of bacon on it. Jeff got the same bacon bomb sandwich that I got last time. My burger was really good, and really messy. I got egg yolk absolutely everywhere. It was 100% worth it, though! 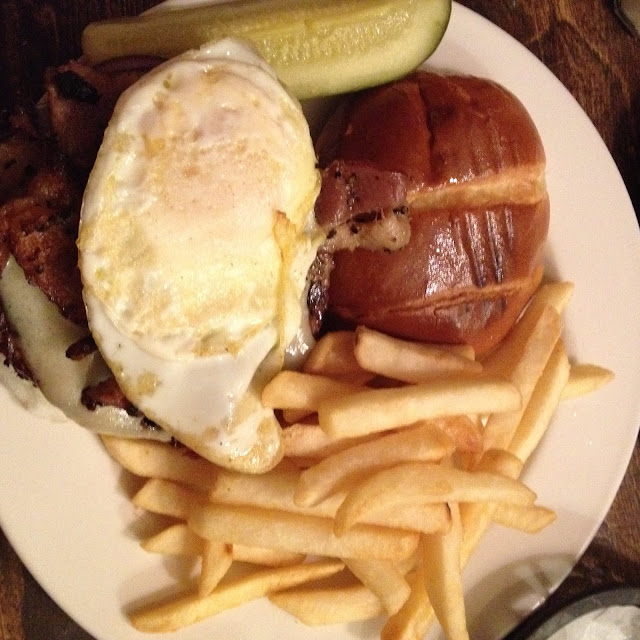 Somewhere under that egg is half a pig's-worth of bacon and an enormous burger patty. 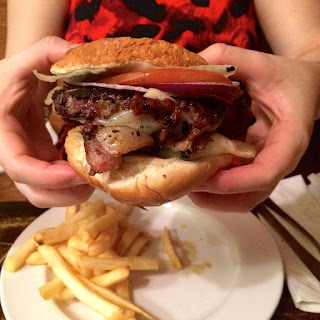 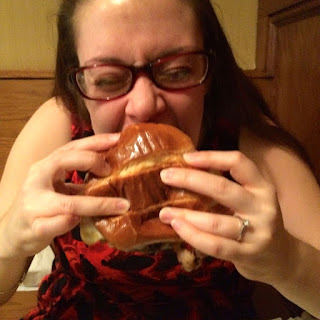 A first for my blog: action shots! Looking good, self...

Somehow, I managed to keep my dress completely spotless. It probably has more to do with the 98273423 napkins I used/covered my lap with, and less to do with my dainty eating skills, but I'm still pretty pleased. On the way home, we stopped at the cafe near our apartment and got a cookie and a brownie, which was simultaneously brilliant and ill-advised, but mostly brilliant. This may have been a last-second plan, but I can't say I was disappointed that we went here instead of the fancy place!

I think our next restaurant excursion will be a return journey to the Polish Buffet, so stay tuned for a future post on great quantities of pierogis and kielbasa! 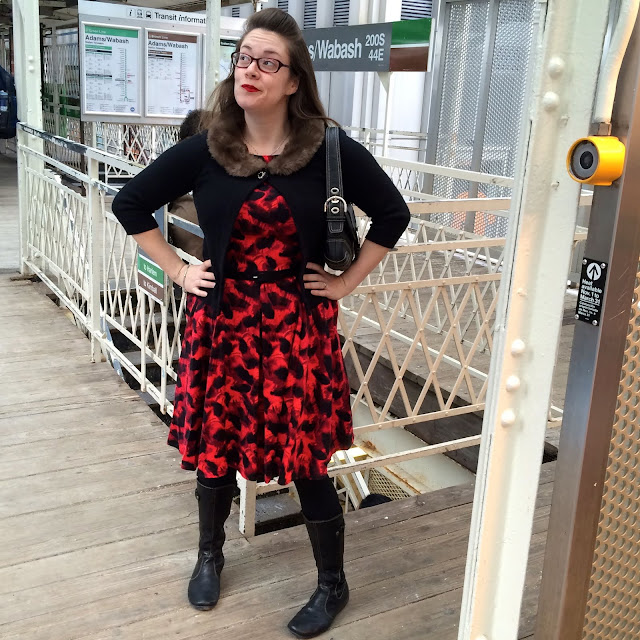 Do you prefer to try new restaurants, or go to your favorite places over and over?

Facebook
Google Plus
Bloglovin'
Posted by Emily at 6:29 AM

Email ThisBlogThis!Share to TwitterShare to FacebookShare to Pinterest
Labels: bacon, Chicago, restaurants, what I wore