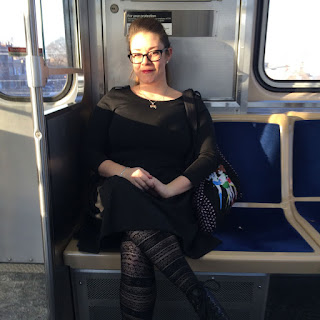 Before we moved to Chicago, Jeff started keeping a list of all the restaurants he wanted to try. His list had reached 20 places before we even left LA, and we've added five more since we got here. We've been slowly but steadily making our way through the list since we arrived, and last week Paddy Long's number was up. Jeff saw it on Travel Channel's Bacon Paradise 2, so as you might guess, it specializes in smoked meats of the porcine persuasion.

More background: both of us are pretty much obsessed with bacon. It's a large part of why I went back to the carnivorous life after over seven years as a vegetarian. While I'm increasingly committed to a healthier lifestyle on the merits of things like healthy food and exercise, I'm not made of stone (a.k.a. I'm still going to eat bacon when I want.) In fact, a big reason that I've been cooking very healthy, veggie-filled dinners every night is to balance out the one day a week that we go to one of the places on Jeff's list. It feels balanced to me.

But I digress! First things first: I wore clothes to Paddy Long's, as I typically do when leaving the apartment. My outfit was chosen with one consideration in mind: comfortable consumption of a giant meal. I ended up going with an old Gap dress, as it's somewhat stretchy and not at all clingy or binding.  I decided to make it an all-black ensemble, which is something I used to do a lot, but to make it more interesting with textured tights and an actual hairstyle. 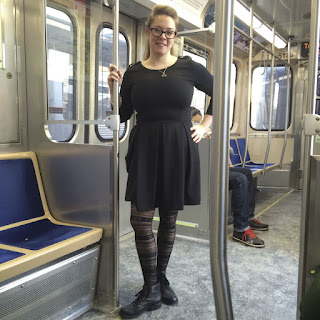 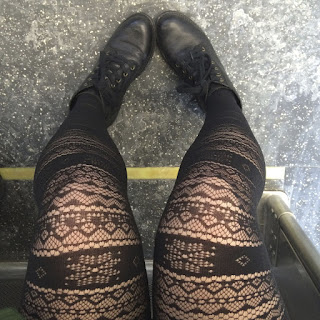 I felt slightly foolish taking these photos on the El, but needs must. The original plan was to take them on the platform, but it was 1) a little cold and 2) not worth potentially missing the train that was waiting to leave from the end-of-line station we live near. Also, my wardrobe used to remind me of Steve from Blue Clues' closet, only with black dresses instead of striped rugby shirts. I'm working on that.

It's amazing how weather that would've been unthinkably cold back when I lived in LA has become 'openwork tights and no hat' weather after four months in Chicago. 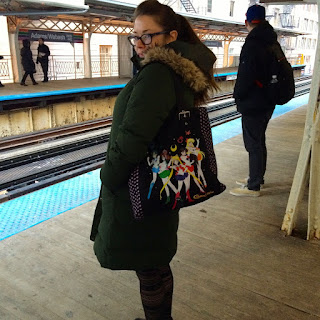 This coat may not be the cutest, but it's extraordinarily warm. The purpose of this photo, however, is not to highlight how much I need to step up my outerwear game, but to draw your attention to my AWESOME Sailor Moon bag. It was the only color in my entire outfit. In middle school, I used to wake up at 6AM to watch DiC's weirdly edited and dubbed version of Sailor Moon on broadcast TV. #worthit! 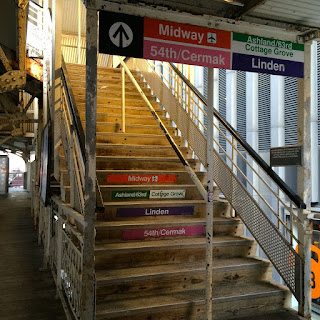 By the time we got there, I was ready to eat everything ever. One must perform a delicate balancing act when going out for a giant meal -- you need to be hungry without crossing the line into hangry. This time, I succeeded. 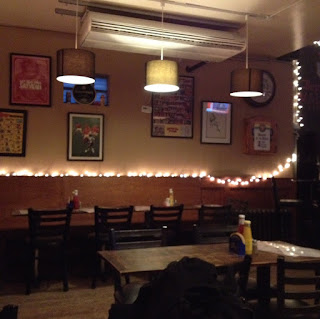 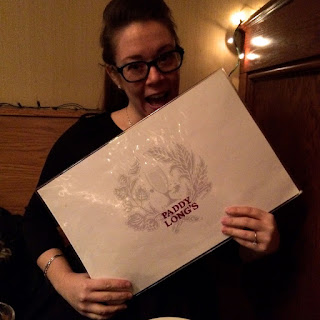 Christmas lights as decor get me every. Single. Time. Also, when I'm excited about something, I'm incapable of posing for photos like a normal person.

It was so hard to decide what to order! We went with the bacon board as an appetizer, which came with four different types of bacon, instead of the bacon poppers or the deep-fried bacon. I'm hoping we go back and try the others soon, though! 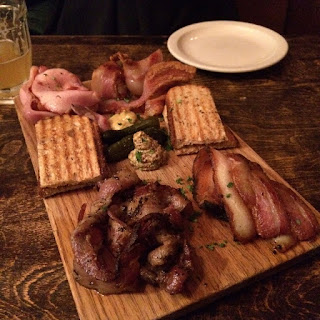 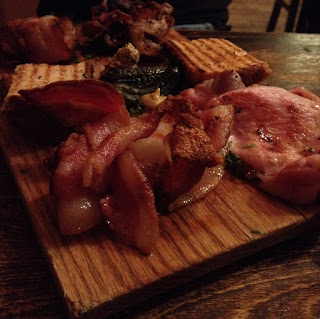 OH MY GOODNESS. Just look at it! Also, here's an excellent example of how much better the camera on the iPhone 5 is than on the 4S.

Jeff ordered a BLT with half a pound of bacon on it, while I ordered a Bacon Bomb sandwich, which was a slice of their meatloaf with yummy cheese and toppings on it. 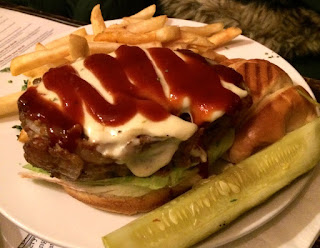 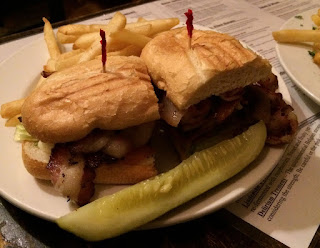 It was epically satisfying. Now, I consider meatloaf to be among my specialities in the 'unhealthy meat dishes' bracket. The meatloaf here, though, showed me how far I still have to go to achieve meatloaf Nirvana. This place was awesome and delicious, and had a lovely relaxed pub vibe. We will definitely be going back! As far as the outfit goes -- the comfy, stretchy dress was definitely the right choice. I probably ate close to a pound of bacon.

Email ThisBlogThis!Share to TwitterShare to FacebookShare to Pinterest
Labels: bacon, Chicago, food, restaurants, what I wore