How NOT to curl your hair

The topic of today's post is Failure. More specifically, Miserable Hair Failure. I concluded a few months ago that my hair is simply uncurlable. I lived in LA for eight years, and always seriously envied the effortless-looking, bouncy long curls that so many girls in Southern California sport. I had tried a number of times to curl it with a curling iron, but it never quite came out right, and always fell flat almost immediately. For a long time, I blamed it on my ineptitude with a curling iron, but after a good friend (with A+ hair-curling game!) kindly spent an afternoon curling my hair, only to have it revert to form before Jeff could see her handiwork, I figured curls just weren't in the cards for me. It was ok. I'd made my peace.

Then I discovered the world of vintage style blogs, with their wet set pin curls and foam roller tutorials, and began to hope. I spent an afternoon watching hair tutorials on Youtube (a first for me!) and ordered pin curl pins on Amazon. When they arrived, I rewatched this Cherry Dollface tutorial and tried out a few experimental curls. It worked! They stayed in for the entire day. Someday, when it isn't 85 degrees INSIDE my apartment despite wintery OUTDOOR temperatures, I'll do my entire head. 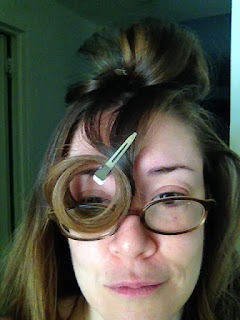 I mean, they stayed curly when I took them out, even if my pinning skills were below grade level.


Next up was a pin curl wet set. I watched more videos, read tutorials, and gave it a shot. Jeff laughed at my pinned-up hair (sorry, no pics were taken with the pins in). But it worked, more or less! But there were still a couple of problems: 1) my hair is pretty long, so it was hard to find space for all the curls on my head, and 2) I wasn't confident about sleeping in them, so I took them out before bed (photo below) and by the next day, they had fallen quite a lot. 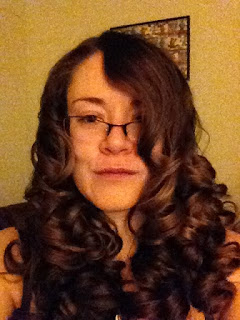 The lighting in our living room at night is awful, and this was taken with the front camera on my iPhone 4S. Sorry!

That brings us to today's epic fail. I decided to try a foam-roller wet set, after reading yet more tutorials.  It seemed like it would be easier than pin curls, and more likely to survive a night of sleeping on the set. I used 1 1/2", 1", and 3/4"rollers (the latter only because I'd run out of all the others before I ran out of hair!), because Tasha from By Gum, By Golly advised using smaller curlers for the front sections, and my hair is much longer than hers. 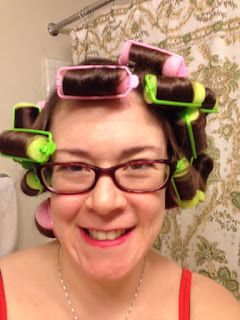 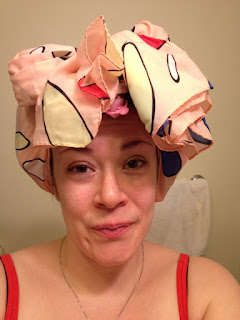 Blissfully unaware of the coming disappointment. On seeing these pics, my sister said, and I quote, "Right now I feel like  I tumbled butt-first into the 50s."

After an admittedly uncomfortable night's sleep, I sleepily but eagerly took out my first few curlers. Jackpot, or so I thought. 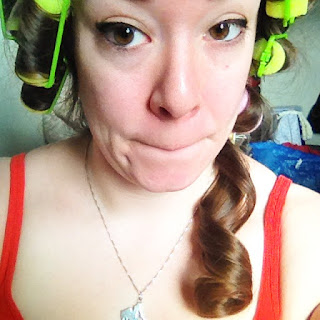 But once I got to the front section, signs of trouble appeared. The back had started to fall already, while the front appeared to be approximately half as long as the rest of my hair. 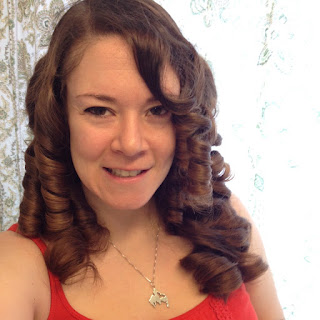 On the gooooood ship, Lollipop…

At this point, I began to wish I'd used the 1" curlers all over. Then I started brushing. 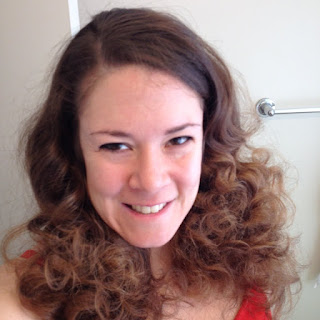 I have a very bad feeling about this...

All hell broke loose. The bottom and back sections reverted to nearly straight, while the sections from the 1" and 3/4" curlers got bigger and puffier and more tangled with each swipe of the brush. After twenty minutes of brushing, I took the above picture and went to have a yogurt. Belly full, I reassessed, and decided that there was no salvaging this set. So I threw it into a lazy-girl's poodle and took an outfit pic! All I did for the poodle was put it in a ponytail atop my hair, pulling it only halfway through the elastic on the final go, and pinned some of the curl riot around the folded-up part of my hair. 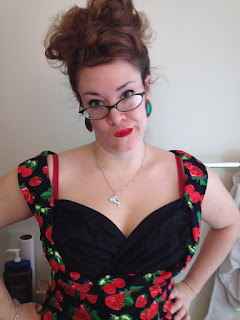 At least my dress has strawberries all over it!

Well, as my boy Freddy Nietzsche says, was mich nicht umbringt, macht much stärker (what doesn't kill me makes me stronger). Lessons learned:

1) No matter how much hair you have, 1 1/2" curlers are too big for a vintage wet set.
2) Next time, I'll use 1" rollers all over, and only roll them up to my shoulders or so, a la Modern June Cleaver (whose hair is my goal!)
3) In writing the previous point, I realized that I should've gone with June's method from the get-go. D'oh!

Does anyone out there have any helpful tips for getting better results?
Posted by Emily at 10:26 AM