A Taste of Chicago

Well, I still have a *slight* backlog of potential posts in both the Restorative Recipes and Stuff We Did categories. In case you couldn't tell, I'm not the world's most linear person, so I'm not necessarily going to post these things in the order they happened. Honestly, this is mostly because I'm trying to convince Jeff to release me from the no-photos-of-him-on-the-blog promise for a post on our wedding, but it's also because I'm a little spontaneous when it comes to deciding what to write about.

All of this is a roundabout way of saying 'don't worry that today's post is all about the most recent fun thing I did, because I haven't forgotten about all the other stuff!' 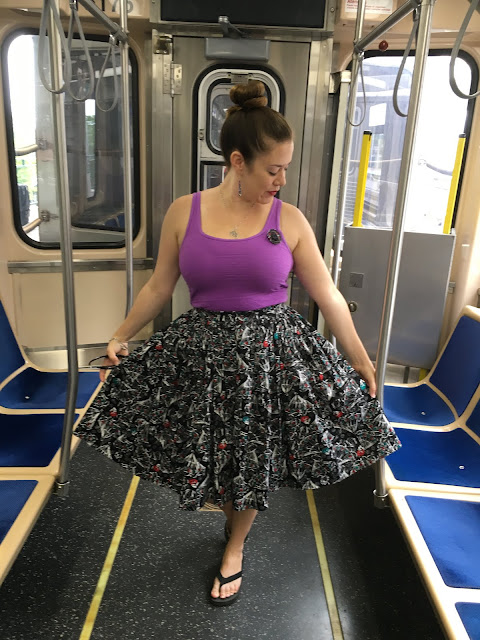 Last week, Jeff and I went to the Taste of Chicago in Grant Park, all because I'd seen a sign on the train advertising it. (Turns out that my sister isn't the only one who's susceptible to advertising.) When we decided to go, we didn't realize that it was a huge deal out here and a veritable Chicago institution, but when I went to work after Fourth of July and saw that a major road was closed and buses diverted to allow people to prepare for the event, I realized it was probably a bigger deal than I'd thought.

It was supposed to be in the high 80s and sunny that day, so I wanted to wear a shirt that was easy to clean, for when I inevitably got sunscreen all over myself. This lavender tank top was an impulse purchase from my last Target run, and I have grand plans to wear it with all sorts of unexpected things. There's no lavender anywhere in this lovely Spanish Fans Jenny skirt from Pinup Girl Clothing, but there are dots of red and blue, and we all know what red and blue make when combined: purple! (This is totally a post-hoc rationalization that I thought of while we were on the train home that day.) I know I already have a dress in this print, but I adored it so much that when this pre hemmed (!!!) skirt popped up for sale on Facebook, I felt it was a wardrobe necessity.

I wore flip-flops because it was hot and forewent the belt, because I had Serious Plans to eat an uncomfortable amount of food. I'm also wearing a Vader brooch that I think is from The Enchanted Witch. Probably. It's super cool, though! 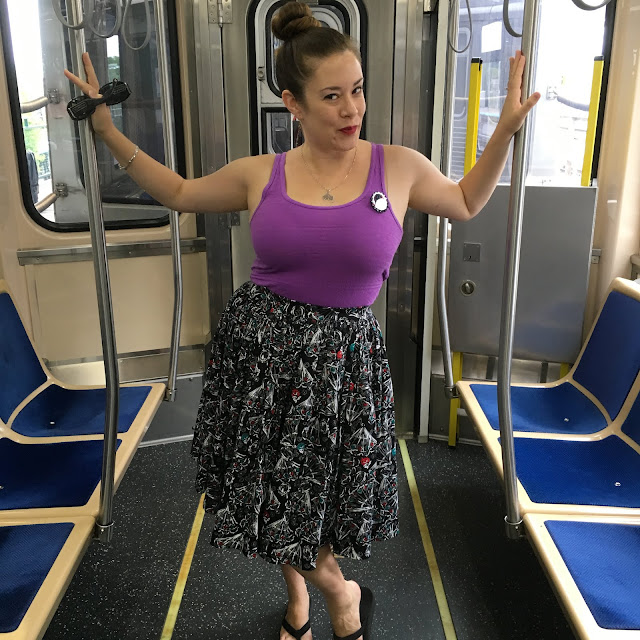 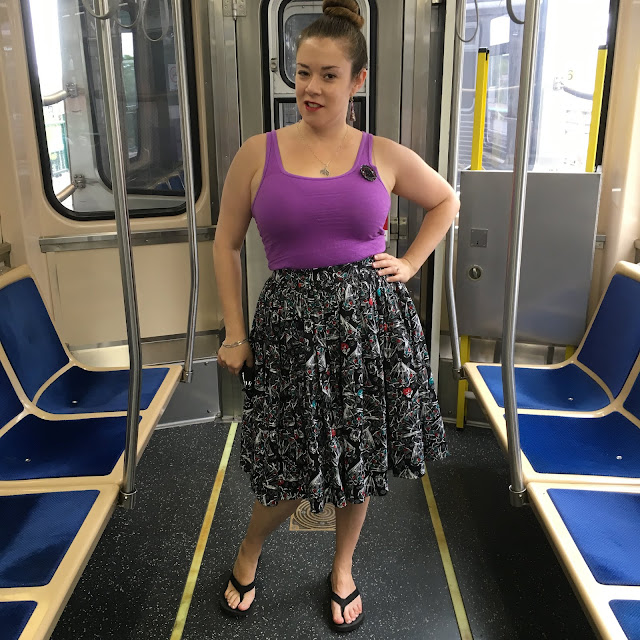 Fun fact: this skirt started out life in Australia, before it was sold to someone I follow on IG, who sold it on Facebook to me! 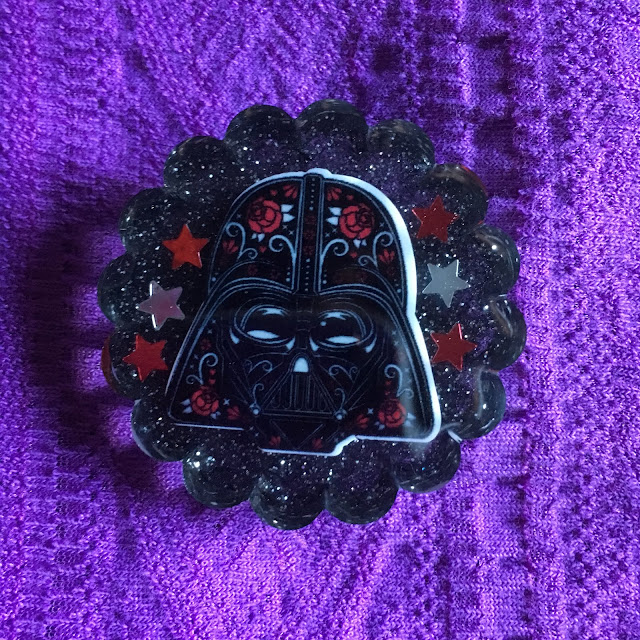 Details of the amazing texture of the top and this awesome brooch. 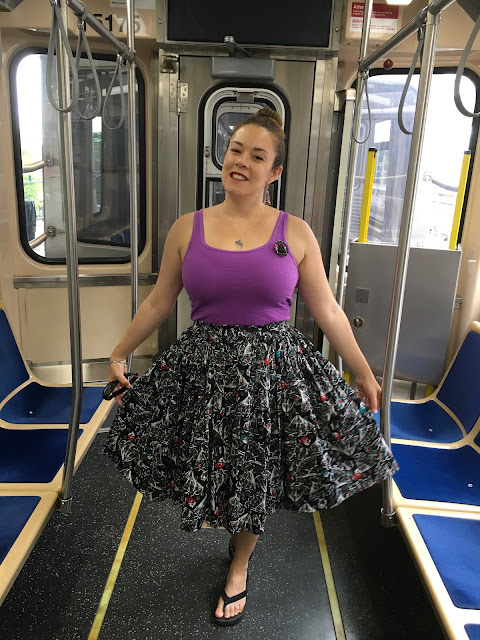 Taste of Chicago sells tickets, which you use to pay for whichever foods you want at the approximately eight zillion stalls they have. Most small portions are 4-6 tickets, and big portions average around 12 tickets. We started out with four dozen tickets and ended up buying another two dozen, because we go hard. 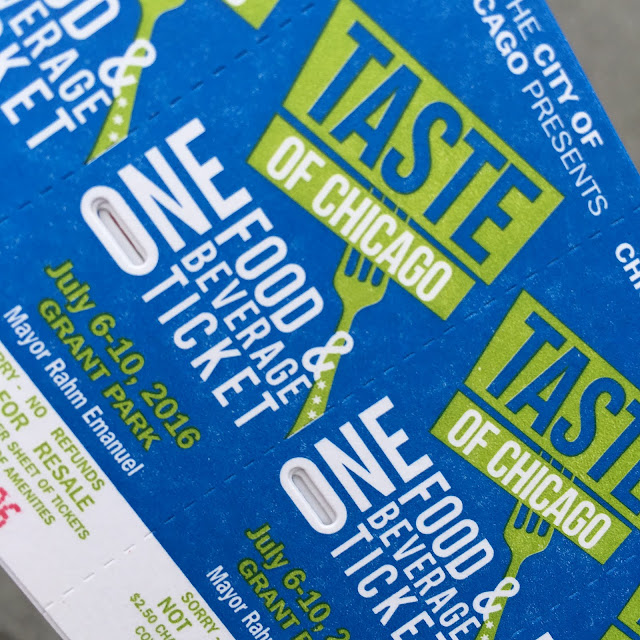 We arrived shortly after it opened, so it wasn't that crowded, but by around 12:30pm, the road was jam-packed and walking had become a Frogger-like challenge. 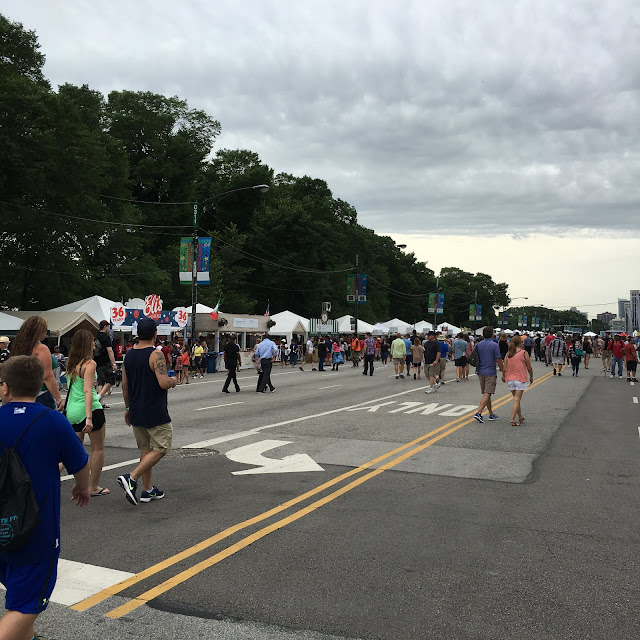 We ate so many different things that it was hard to remember them all, even immediately after we left: as I recall, we had lobster mac and cheese, a pork tamale, thick-cut bacon on a stick (!!!), pierogis, a watermelon paleta, watermelon with chili-lime juice, sausage, a chicken-fried steak sandwich with marinara sauce, pad thai, and potstickers. The real standout was the mustard-fried catfish from BJ's Market and Bakery. It was hands-down the best fried fish I've ever had, and we went back for seconds! It was the first thing we ate, so I was too hungry to get a picture, and by the time we went back for seconds, my hands were sticky from watermelon everything and I didn't really want to touch my phone. The chili-lime watermelon was a close second, although Jeff had zero interest in it. The upside of that: I got to eat an enormous portion of watermelon! 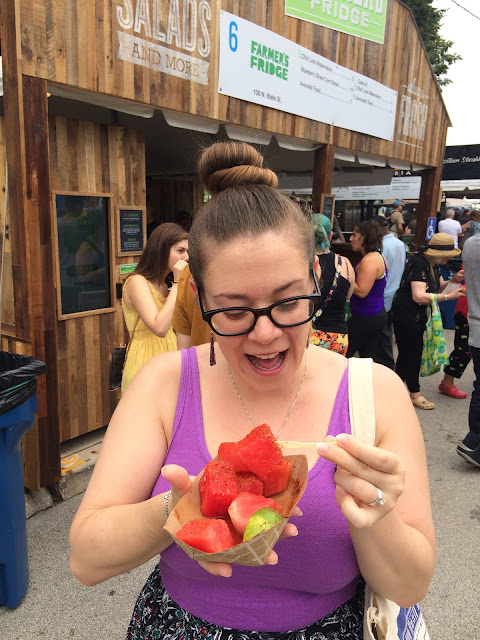 Taste of Chicago is an annual event, and we will definitely be going back!

My fellow Chicagoans: what other food festivals should we check out?

Facebook
Google Plus
Bloglovin'
Posted by Emily at 5:37 AM

Email ThisBlogThis!Share to TwitterShare to FacebookShare to Pinterest
Labels: adventure, Chicago, food, Stuff We Did, what I wore