Today in Space Race History: The Eagle Has Landed

Today is one of my very favorite days of the year: not because it's my birthday (though I do enjoy being the birthday girl!), but because it's the anniversary of the first time human beings ever set foot on another heavenly body. 47 years ago tonight, the Command Module of Apollo 11, carrying astronauts Neil Armstrong and Buzz Aldrin, touched down on the surface of the Moon.

In honor of this momentous anniversary in American spaceflight, I'm debuting yet another space-themed outfit on my blog,  starring my Maois in Space skirt from the Oblong Box Shop and a fabulous atomic-rocket brooch from Atomic Lucite! 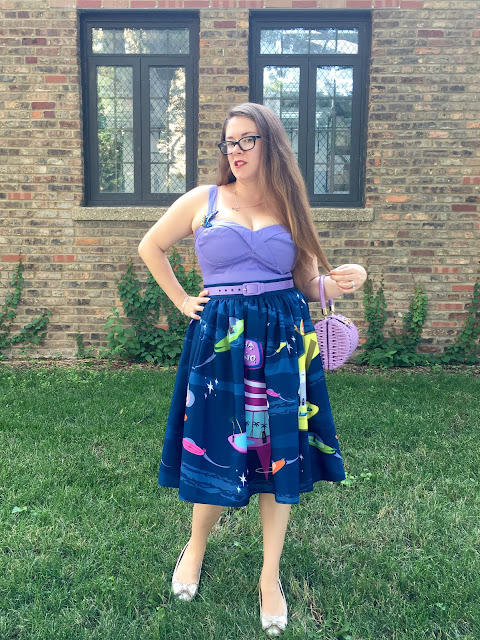 I've been getting into lavender lately, and couldn't resist this Vamp top when PUG announced a sitewide sale for the July Fourth weekend. I'd also wear this skirt with coral, aqua, pink, and stripes (yes, stripes are a color now!) This incredible boomerang brooch was a birthday surprise from Atomic Lucite's Melanie, and when it arrived (with an Apollo 8 mission patch!!!), I spent the entire rest of the night just watching it catch the light in my hand, because it's seriously gorgeous. 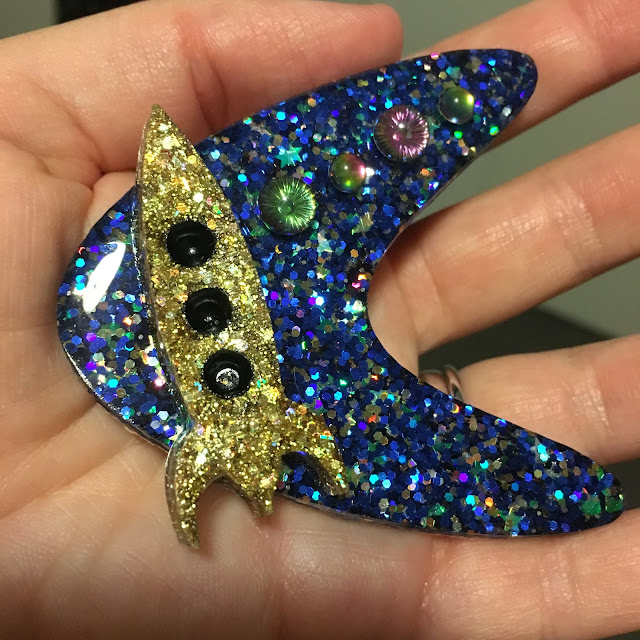 I honestly planned to wear my pink jelly wedges with this outfit, but it was so hot in my apartment that I couldn't bear the thought of buckling them on, so we'll just have to imagine that I'm wearing amazing hot-pink shoes. 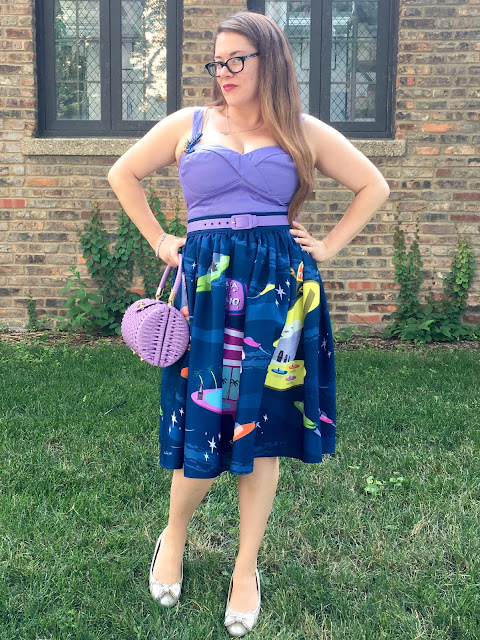 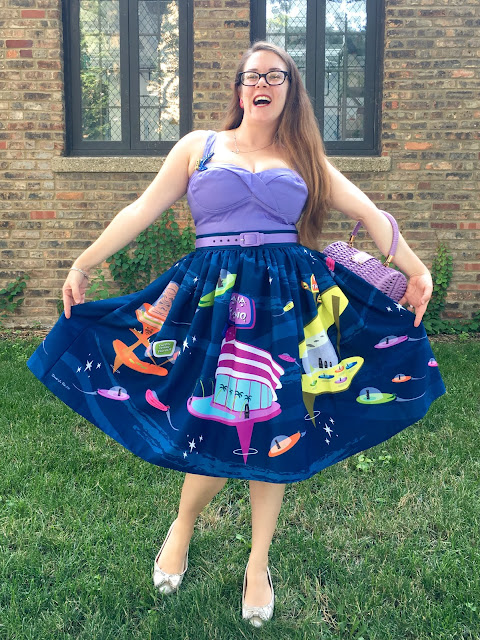 In previous installments of my ongoing 'Today in Space-Race History' series, I chronicled the first human being to fly in space and the first American to do so. For this entry, though, I'm going to do my darnedest to keep a leash on my boundless enthusiasm for all things moon-landing. 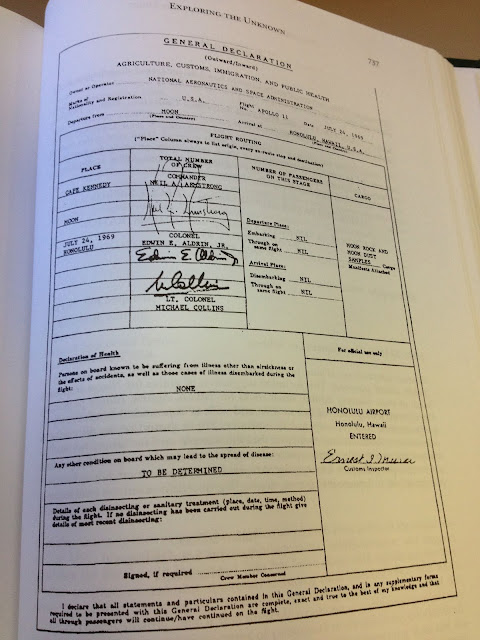 One of my favorite things from Project Apollo is the customs form that was filled out when Apollo 11 returned. Zoom in on the lower left corner, where, under the question "Any other condition on board which may lead to the spread of disease," the customs inspector for Apollo 11 wrote "TO BE DETERMINED.

While Apollo 8 is actually my favorite of all the Apollo missions, owing to the Christmas Eve radio broadcast that gets me right in the feels every time I hear it, the lunar landing makes me understand what Arthur C. Clarke meant when he said that "Any sufficiently advanced technology is indistinguishable from magic." It's hard to believe that sheer human ingenuity and dogged collective effort managed to put a human being on the moon in 1969, less than a decade after Kennedy challenged the nation to do it. 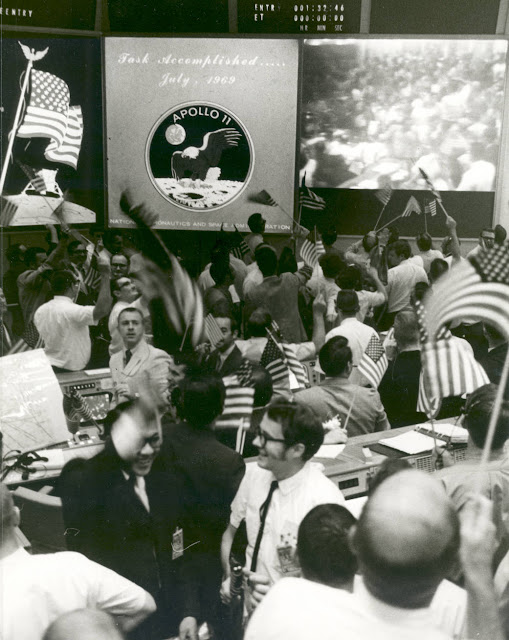 What makes the space race endlessly fascinating to me is the immense richness of its history. To me, the history of space exploration is a microcosm of the human condition: it encompasses humanity's sense of wonder and curiosity, the heights of what cooperation can achieve, the extension of human brainpower to the very limits, the impossible choices of political life, the awareness of our finitude, and how we understand ourselves in relation to one another and the universe itself.

On the eve of what feels like an unprecedented Presidential election, I want to take a step back and reflect on the dizzying heights human beings can achieve when they embrace a common goal. In other words, I want to praise cooperation for public goals.

First, a few numbers. Project Apollo was the culmination of approximately 400,000 individuals  working together on a publicly-funded project of enormous scale. About 36,000 of these were civil servants; the rest were employed by universities and the private companies (Grumman, North American Aviation, McDonnell, etc) who built the spacecraft, computer systems, and so forth. At its height in 1965, NASA's budget comprised 5.3% of the total federal-government budget, for a total of $5.2 billion in 1965 dollars. James Webb, the head of NASA for much of the 1960s, is a master class both in playing the Congressional funding game, and in organizational management. 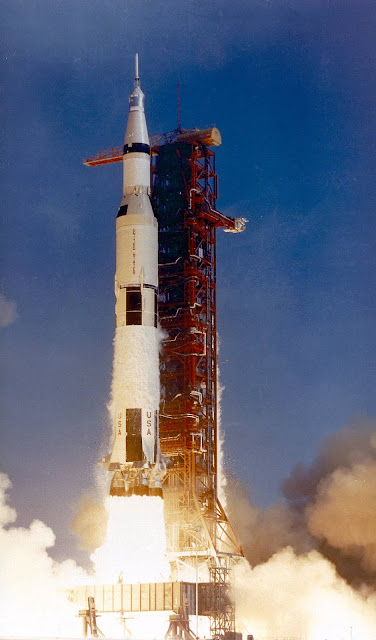 The Saturn V 'moon rocket' that launched the Apollo missions was a feat of engineering as well. At 363 feet tall, it was longer than a football field. It was assembled inside NASA's Vehicle Assembly Building (hey, who needs creative names when you put humans on the moon?!?). The VAB is itself noteworthy: it's still the tallest single-story building in the world, with a 525-foot ceiling and a 10,000-ton air-conditioner. Without that enormous A/C, clouds form inside the VAB and it rains. 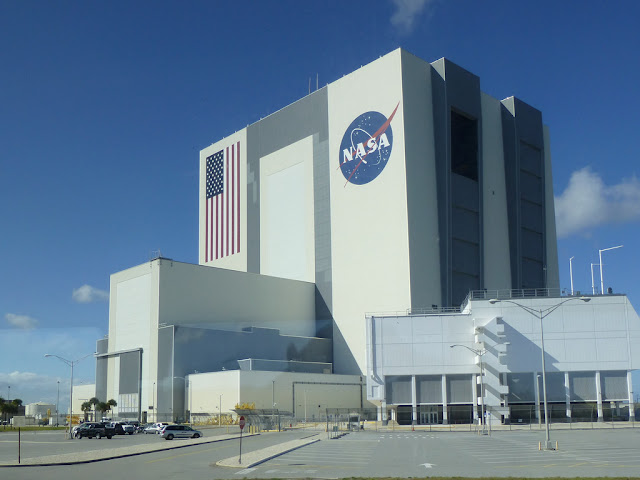 The VAB at Cape Canaveral 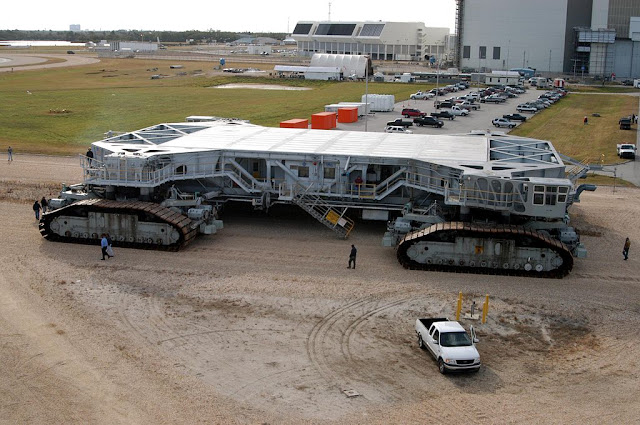 The crawler. To quote Luke Skywalker: "Look at the size of that thing!"

In a 2000 speech, Neil Armstrong said that "[s]cience is about what is, and engineering is about what can be." Engineering involves formulae, math, and a bunch of other stuff that I'm lousy at, as well as a mind boggling high level of precision. Even risk can be reduced to a calculation: for example, the percentage of hard drives that fail within three months, or the percentage of missions that fail. NASA's leadership had to make a choice: what was an acceptable amount of failure? Should components for spacecraft be required to function properly 9 out of 10 times? Should 99 out of every 100 manned spaceflights succeed? If 1 out of every 100 astronauts to fly in space dies, is that acceptable?

The number NASA picked for the crew safety threshold was 999 out of every 1,000. To arrive at this number, the NASA brass weighed the cost of more stringent reliability requirements against the regard for human life and the cost, in the court of public opinion, of dead astronauts. Can you imagine making this type of decision?

This also reveals another fact that fascinates me: a certain amount of components were simply expected to fail, and NASA's engineers had to plan missions with failsafes to account for this expectation. In a spacecraft made up of millions of pieces constructed to fail once in every 1,000 times, you expect literally thousands of things to break! 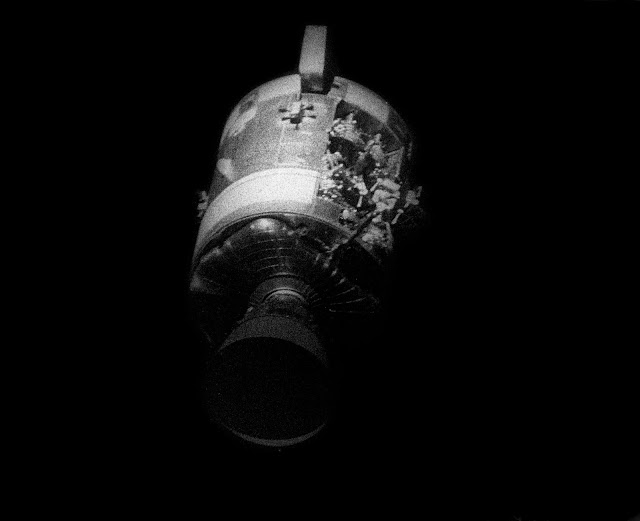 They just didn't expect all the failsafes to break at once. But even Apollo 13 worked out in the end!

The sum total of all of these decisions, all of this planning, all of this money, and all of the hard work by over 400,000 people was this: 12 Americans walked on the surface of the Moon; another 12 orbited it. We have the space program to thank for things like Tang and Velcro; scientists can thank Apollo astronauts for bringing back specimens that have helped begin to unlock the mystery of how the Earth and Moon formed.

And for a brief moment on a Sunday night in July 1969, the world, wracked by the Vietnam War and the turmoil and tragedy of the 1960s, was united in watching Neil Armstrong take the giant leap for all mankind. 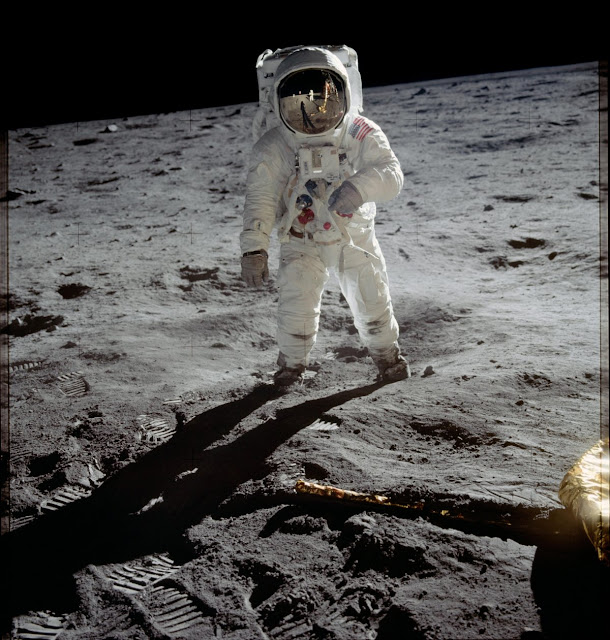 Buzz Aldrin on the lunar surface, with Neil Armstrong reflected in his visor.

I could go on forever about this, but I'm going to end this post with two of my favorite photos from the Apollo era. The first was snapped by Michael Collins as Armstrong and Aldrin ascended from the moon to return to Earth, and shows the Moon, the Earth, and the first vehicle to visit another world. The second is the plaque that was affixed to the Lunar Module's leg and left on the Moon. 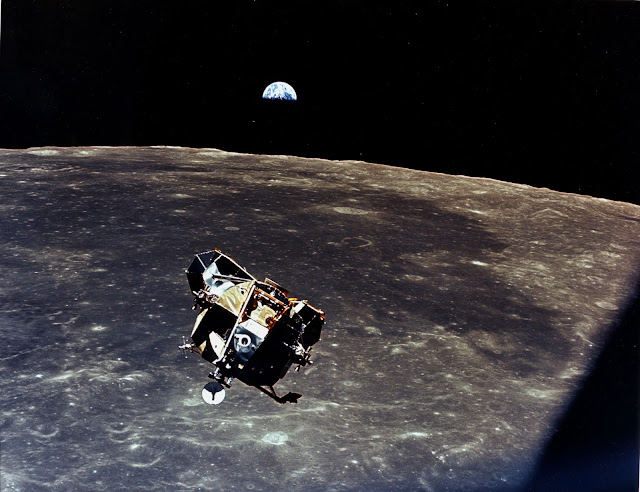 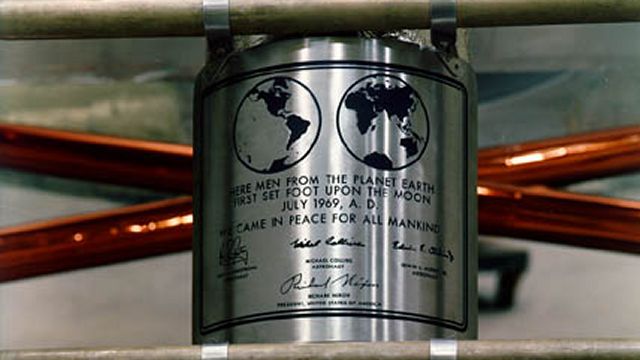 "Here men from the planet Earth first set foot upon the Moon. July 1969, A.D. We came in peace for all mankind."

Facebook
Google Plus
Bloglovin'
Posted by Emily at 5:49 AM