Last month, I chronicled the proudest moment of the Soviet space program: beating the incipient American human-spaceflight program to be the first to put a human being in space. On this day 55 years ago, though, the Empire struck back, briefly sending Alan Bartlett Shepard Jr. into space. In honor of this, I'm wearing another space-themed outfit: 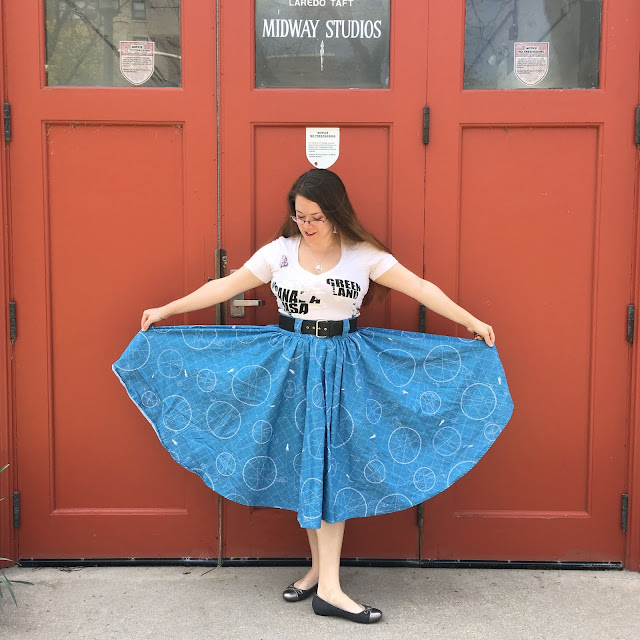 I picked up this skirt from one of my Instagram friends, and was so excited about it! I had seen it online, but it was sold out, so I resigned myself to a life without a full-circle rocketry-themed skirt with pockets. As you can probably imagine, I was over the moon (see what I did there?) when I saw that Amy was selling hers. It's very well made, has belt loops, which is awesome and sort of unusual, and twirls like a dream! After getting my hands on this skirt, I would definitely get another Lil' Lou Lou skirt (I have my eye on this one, in fact!)

I'm wearing it with my map shirt, which I got from Urban Outfitters approximately seven years ago and have worn exactly one other time (to see the Endeavour at the California Science Center.) I'm going for a subtle makeup look here, so as not to take away from all the awesome prints I'm wearing, and of course, my brooch is a rocket! 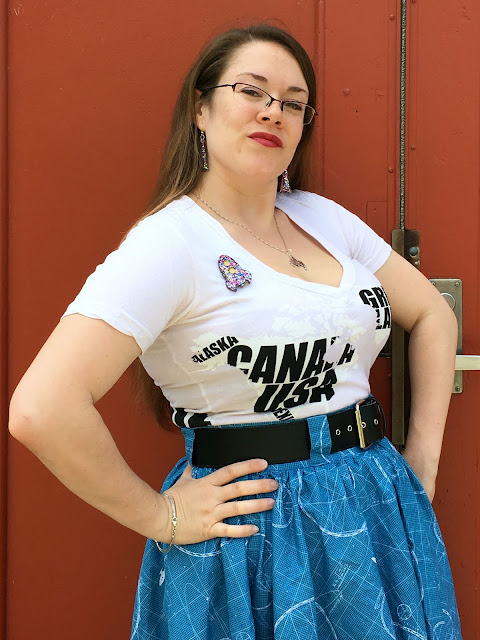 Obviously I had to pair a rocket-themed skirt with my rainbow rocket brooch and matching earrings from Atomic Lucite! 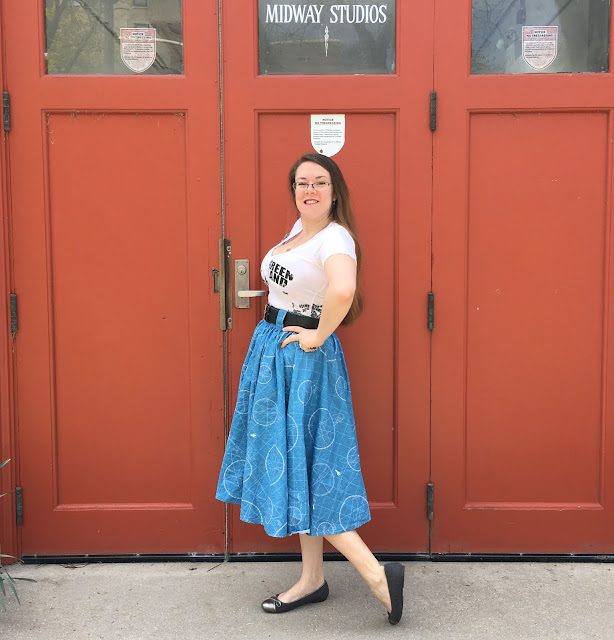 I'm saving most of my space-race-historian mojo for the anniversary of Apollo 11, so I'll try valiantly to keep myself from blathering on and on about Alan Shepard's flight and keep to the highlights reel. The tl;dr of Shepard's flight = 'Americans went nuts, even though we still hadn't caught up to the Soviets, but it created the political momentum needed to make Project Apollo (aka the lunar-landing program) a reality.' 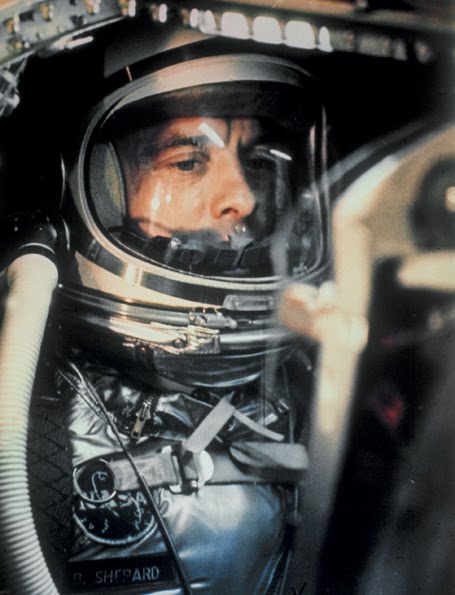 Shepard aboard Freedom 7, prior to his historic flight. Weren't the Project Mercury spacesuits totally awesome? 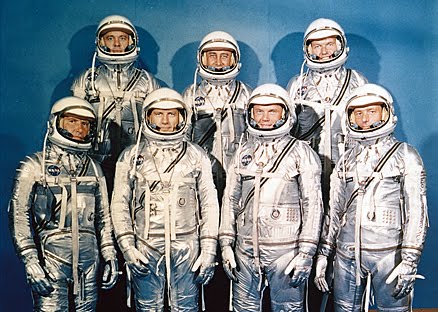 Alan Shepard was one of the fabled Mercury Seven, the first group of astronauts chosen by NASA. By many accounts, Shepard was somewhat mercurial himself. As Tom Wolfe puts it in The Right Stuff, his take on the Mercury Seven and the early days of American spaceflight, when dealing with Shepard one never knew if they'd get 'Smilin' Al' (the glad-handing, easygoing persona) or the 'Ice Commander.'

Shepard successfully lobbied for the first Mercury flight, and was launched into space on May 5, 1961 for a 300-mile trip aboard Freedom 7. The name of that flight shows just how subtle the Cold War was.  The launch was delayed due to weather for several hours, which made Shepard quite impatient. When they were finally ready to launch, he famously exhorted Mission Control to "light this candle." 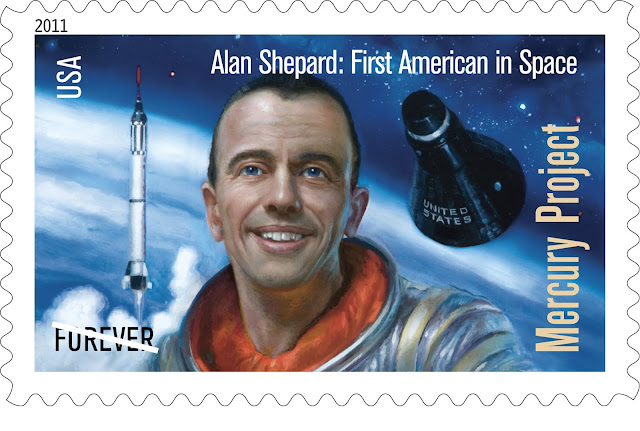 True American heroes get their own postage stamp.

Following Shepard's flight, the American people went nuts and JFK saw an opportunity to steal the Soviet's thunder. Vice President LBJ had been pushing Kennedy to recognize the value of investing in human spaceflight; after seeing the enormous reaction to Shepard's flight, Kennedy got with the program. The goal in all of this was to beat the Russians to symbolically-important milestones, such as a circumlunar flight (in plain English: flying around the moon) and the holy grail: a moon landing. Immediately after Shepard's flight, Kennedy met with NASA's leadership and asked how long they'd need to prep for a lunar landing. Their answer? At least a decade.

On May 25, 1961, JFK delivered an historic speech outlining his goals for American spaceflight, in which he uttered the following words:
"I believe that this nation should commit itself to achieving the goal, before this decade is out, of landing a man on the moon and returning him safely to earth."
It was an ambitious goal. Seriously, Kennedy, why bother asking NASA how long it would take if you weren't planning to listen? But all's well that ends well.

Shepard himself didn't fly again until 1971, owing to a rare inner-ear disorder that was finally corrected surgically. He was commander of the Apollo 14 mission, during which he became the first person to golf on the moon. 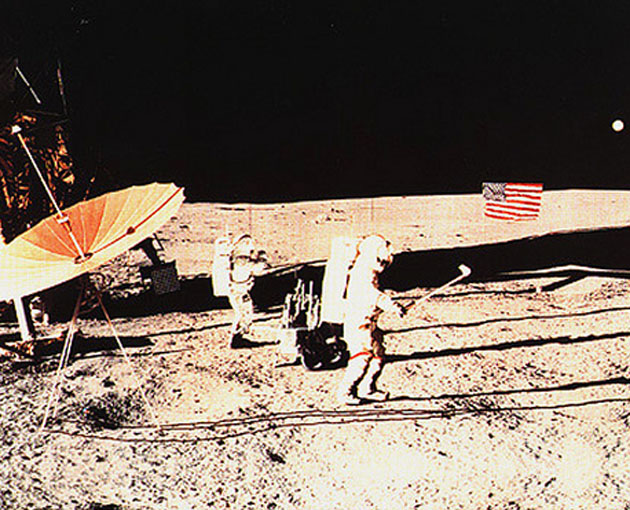 Golf on the moon > golf on Earth.

If you're interested in learning more about Alan Shepard or American spaceflight in the 1960s, there's plenty of amazing stuff to read and watch. If comprehensively researched histories are your bag, I highly recommend that you check out A Man on the Moon by Andrew Chaikin and Rocket Men by Craig Nelson. These two books are perfect for the person who wants to know absolutely everything about the moon landing, and/or the person who wants to bore their relatives, partner, and friends with a barrage of fascinating facts about the space race. If you're interested in something a bit more lively but less fact-packed, I'd suggest Tom Wolfe's The Right Stuff. It's a classic for a reason! For all you edutainment fans out there, I can't recommend HBO's From the Earth to the Moon strongly enough. It's a 10-episode miniseries dramatizing key moments and events in the American space program from 1958 or so through the end of Project Apollo. It definitely made me cry more than once.

For all you history buffs out there, what's your favorite era/event to learn about?

Facebook
Google Plus
Bloglovin'
Posted by Emily at 6:03 AM

Email ThisBlogThis!Share to TwitterShare to FacebookShare to Pinterest
Labels: nerding out, outfit, space race, this day in history