During Honeymoon Part 1: Staycation Edition, I finally got to go to the Shedd Aquarium, and of course, I dressed for a completely different occasion. I have to wonder if the part of my brain that recognizes (and more importantly, cares) that I'm not dressed appropriately for an occasion was irreparably damaged by my years in grad school. I certainly wouldn't be the only casualty! 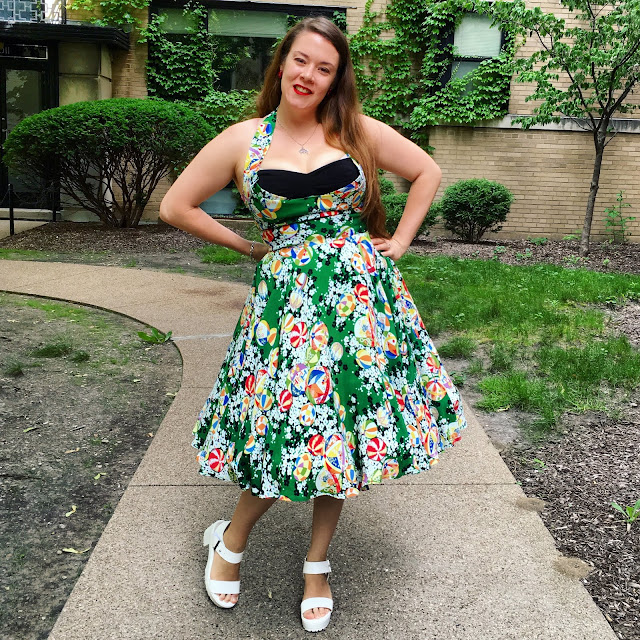 It really hasn't been that long since I got my first Trashy Diva dress, but the more I wear the ones I have, the more I feel like I gotta catch 'em all. (Yes, I've been playing Pokemon Go. Don't judge me!) I had passed on this print when it came out, but over the past six months or so, the non-buyer's remorse came on strong. It's such a pretty print, the colors are vibrant and work together so perfectly, and most of all, it's green!

After a couple of months of desultory sulking whenever I thought of this dress, I checked Facebook one day and saw that the ever-lovely Bristol had tagged me in a very important post. A shop in Florida had listed their remaining Trashy Diva stock, and this dress was on the list in my size! Reader, I ordered it.

This dress definitely lived up to my somewhat-outsize expectations: the fabric is lovely and drapes like I imagine Harry Potter's Invisibility Cloak does, it's the perfect length, and it's extremely comfortable for a hot day of walking, eating, and being outside. I'm not usually much for halters, but the wide straps and elasticated panels make this one an exception. The only thing that I need to do to make this dress perfect is to shorten the halter strap a tiny bit, but that's an easy fix.

I don't usually wear a petticoat under my Trashy Diva dresses, but I decided to try it with this one, and I think it looks cute! It was a little too hot to actually wear the petticoat all day, but as soon as the weather returns to something more human, I'm definitely going to wear it with my ruby-red petticoat. Since this dress is a little shorter than some of my other dresses, I think it works best with my Malco Modes Jennifers, rather than my longer Samantha. 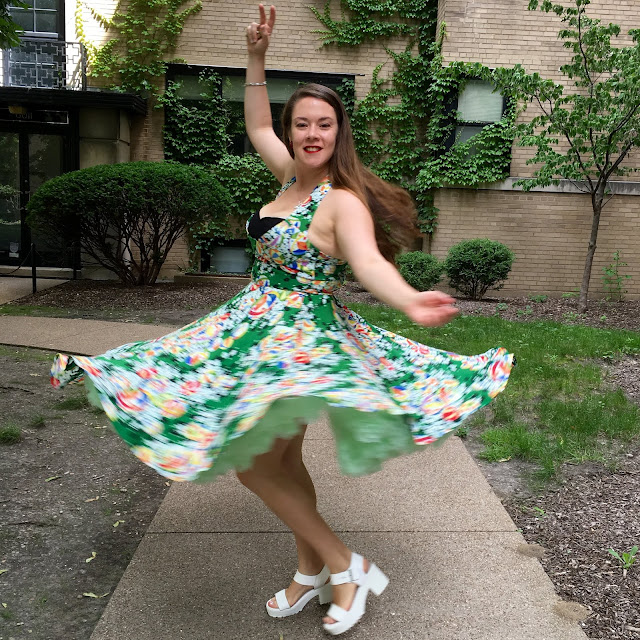 This dress spins so well that a healthy number of my twirling shots were NSFW... 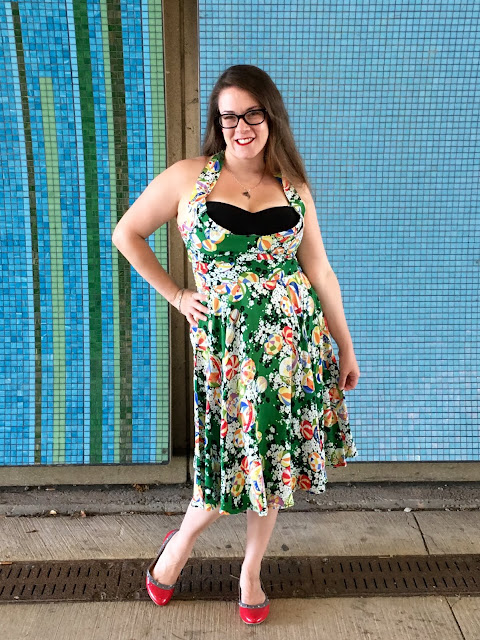 Every single time I've gone past the Shedd Aquarium, there's a massive line, and the day we went was no exception. However, there were two animal handlers with a turtle next to the line for the first 15 minutes or so, as well as a canopy for us to stand under, so the wait didn't make me too grumpy. Once we got inside, I marveled at the incredible pre-stock-market-crash architecture of the entrance hall: 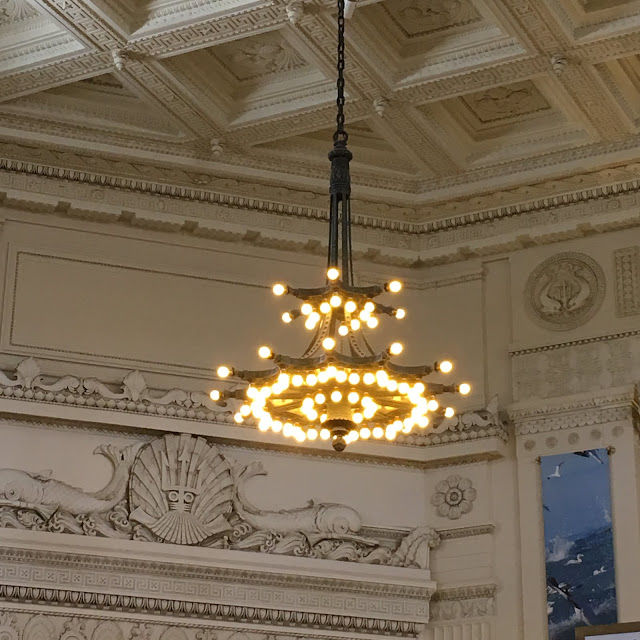 Each of those squares on the ceiling has a marine animal relief inside it. The attention to detail on older buildings absolutely astonishes me sometimes.

Jeff and I spent hours walking around the aquarium, including a fifteen-minute interlude of me chasing a Dory fish around a massive tank in an effort to get a good photo, in which I became progressively more irritated. I saw some fish that were almost frightening in their prehistoric appearance, as well as some things that I recognized from the freshwater fish I used to have as a kid. 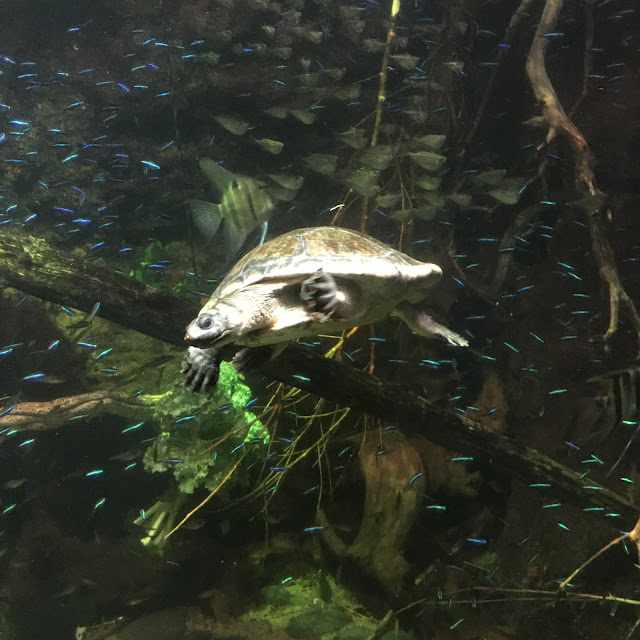 This title is surrounded by neon tetras! All of my neon tetras were named after characters from Lord of the Rings.

My favorite exhibits were the larger marine animals, though. The Shedd has a number of dolphins, beluga whales (!!!), otters, and penguins, and I basically lost my mind when I got to those exhibits. It's almost impossible to say which I liked best. Watching the penguins zoom around their habitat was strangely hypnotic, and I squealed like a child every time a beluga whale swam past. 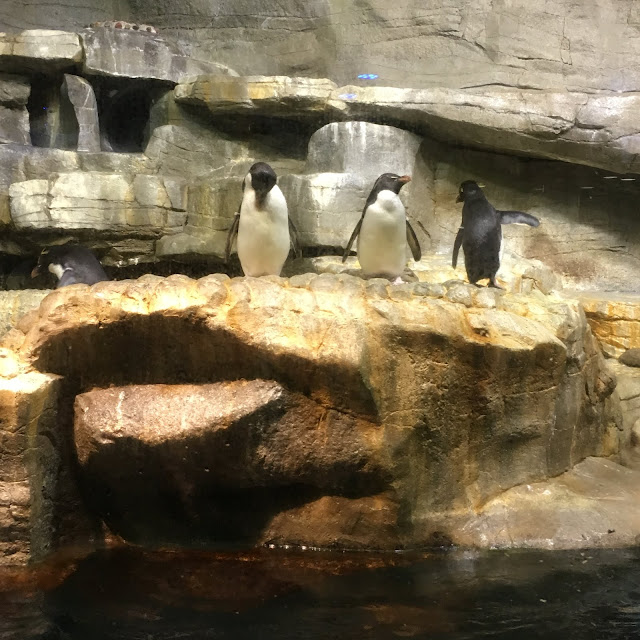 "I'm telling you, the South Pole is this way…"

The Shedd is larger than it looks from the outside, but it's still quite a bit smaller than the other places on Museum Campus, so we had some time to spare before dinner. 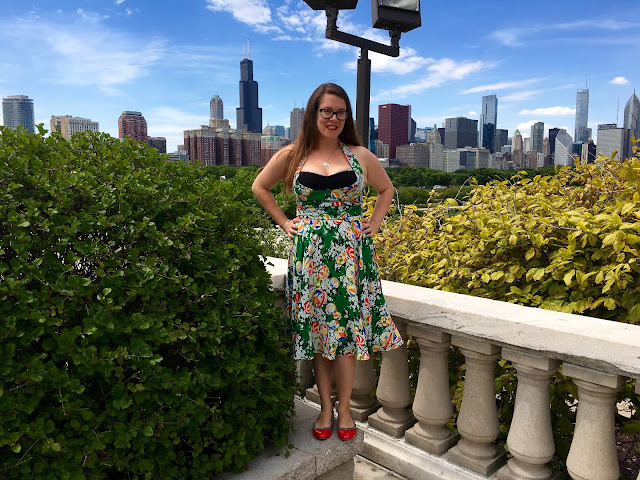 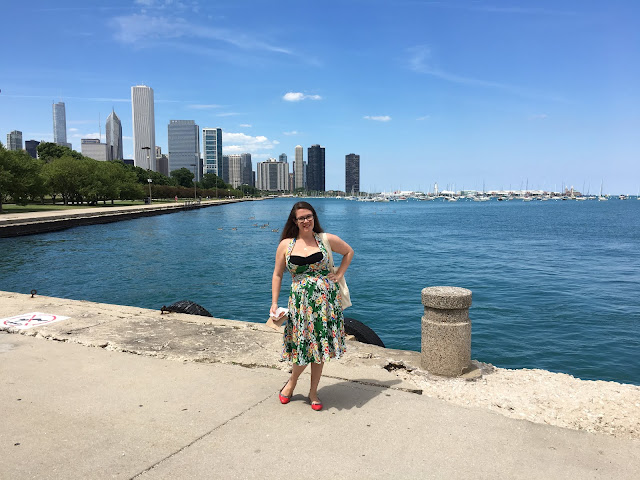 After making Jeff take even more pictures of me, we walked up to the Loop along Lake Michigan for a pre-dinner drink. I'm not especially familiar with bars in the Loop, so I suggested a place I'd been to once before for a Trashy Diva meetup, and despite the fact that I was wearing a different dress, the server remembered me! That was a real shocker. I guess that it's pretty memorable when five women come in wearing an amazing assortment of Trashy Diva dresses.

We had a lovely dinner at Frontera Grill, which I did not remember to photograph, and I was in bed by 9, so I'm calling our day at the Shedd an unequivocal victory.