We Who Fight Monsters

In the past week and a half or so, I've seen a disturbing uptick in what I'd be tempted to call "body-shaming f***ery" if I wasn't publishing these words on the internet. There's good reason to believe all of this kerfuffle is just one miserable person on Instagram making one burner account after another and leaving idiotic, unkind comments on anyone who appears less miserable and more confident than she is. But still, since one pathetic schmuck can have outsize influence on the world, activity like this must not go unremarked. 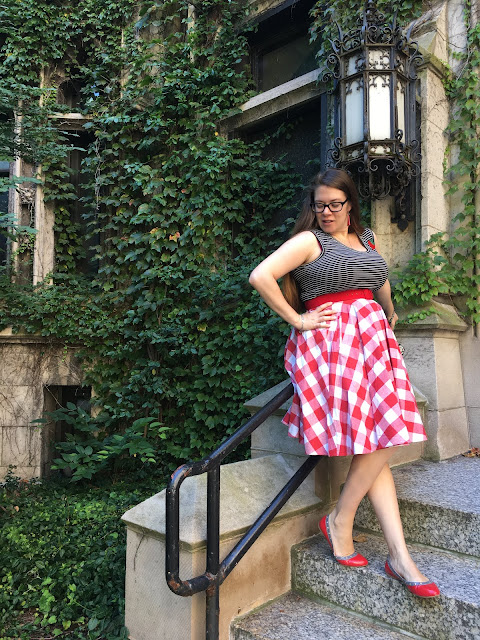 Obviously, this individual isn't familiar with the Word of Yoda: size matters not. As one of my favorite body-positive hashtags puts it, style has no size. After all, style is about one's personal self-expression through the aesthetic choices they make. Personal style doesn't magically cease to exist outside the narrowly-defined range of sizes/body types that some keyboard warriors deem 'acceptable.' Need proof? Take the following quiz:

1) Did you choose to put X garment on your body?
2) Do you like that garment? Does it make you happy?

If the answer to both of these is 'YES!,' then congratulations: you've got style! It's not a particularly difficult concept. 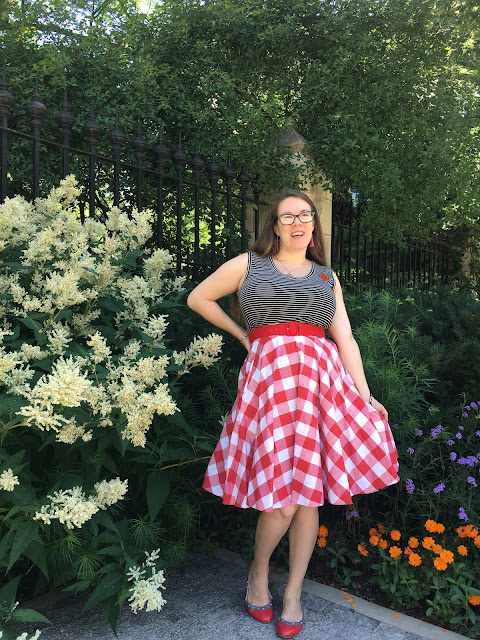 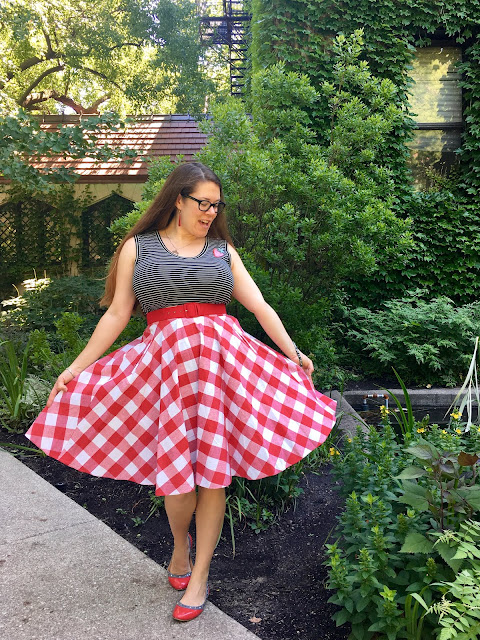 Exhibit A: this skirt makes me happy, and as regular readers know, red gingham is a mainstay of my personal style!

Now, you might not like everyone else's style. I know there are things I see on other people that I wouldn't be caught dead wearing. And I know there are plenty of people who look at my clothes and think the exact same thing. And that's totally natural! We don't all have to like the same things: that's why Baskin Robbins has 31 flavors and why there's more than one store in the mall. The diversity of tastes and preferences is what makes humanity interesting!

But what is utterly and completely not fine is trying to impose your preferences, outmoded views, or personal insecurities on innocent bystanders. In other words: if you don't have anything nice to say, keep your fool mouth shut! And that brings me back to the f***ery I alluded to above. It seems that as long as there's an internet, there will be trolls lurking under every digital bridge, trying to drag others down to their level.

And for someone to barge into others' Insta feeds, on posts that are filled with joy, vitality, and excitement, and try to destroy their confidence and restore the hegemony of fat-shaming? That, my friends, is morally reprehensible, stupid, and ridiculous in equal measure. Say it with me: all bodies are good bodies. There's nothing inherently better about a particular body type! 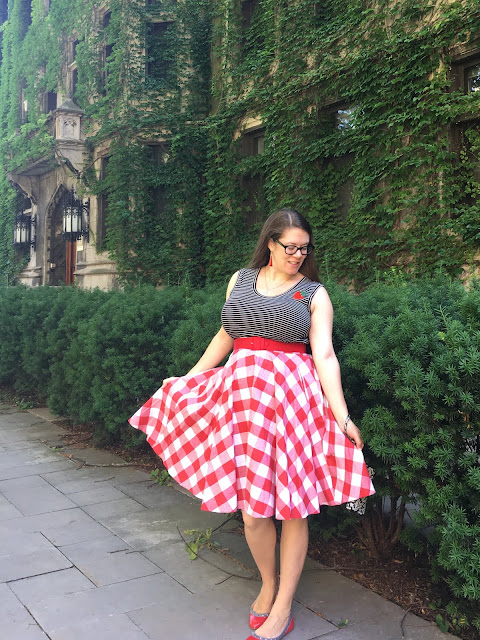 The troll (or trolls) that's currently roaming around the pinup Instagram community is pathetic, to be sure, but she's also vicious, ignorant, unkind, and dead wrong. Someone who attacks people for accepting and loving their body as it is doesn't have issues: s/he has a whole damn subscription!

I've been heartened to see that most of the people I know that this particular troll has targeted are completely unaffected by her derogatory comments about their personal style, her diatribes against fat acceptance, or her faux concern over their health. But not all of us have reached the point in the journey toward self-acceptance that allows us to easily dismiss a troll. And for those of you for whom hateful comments trigger your insecurities, I am sorry that people like this troll exist. I hope that you can come to believe in your heart that when people behave like that, they do so out of their own deep-seated feelings of inadequacy, unhappiness, and powerlessness. (Doesn't make it ok, but it does mean it's not your problem!)

And for all of us who bear witness to this kind of drive-by fat-shaming and targeted trolling, I urge you to join me in doing two things:

First, make like those signs all over the subway in New York: if you see something, say something! Don't let these comments go unchecked. Instead, show the offender by your own words that this community won't stand for such behavior. And it's incredibly important to support the intended target of this kind of bullying, and show them that the trolls are dead wrong. Not sure if you want to go it alone? Tag me in! I'm always happy to provide backup.

Second, don't sink to the same subterranean level as these pitiful garbage humans. No matter how tempting it is to point out that people living in glass houses shouldn't throw stones, please try to refrain from attacking the troll's own appearance. Even if you believe (rightly) that people with janky eyebrows have no right to comment on others' appearance, this is one situation where you absolutely ought to take the high road.

After all, as Nietzsche points out:

I'm only slightly ashamed that this is the second time I've used Nietzsche to illustrate a point on this blog. (The first such instance is still one of my all-time favorite posts, in large part because he'd be so irked at being used in that way.) 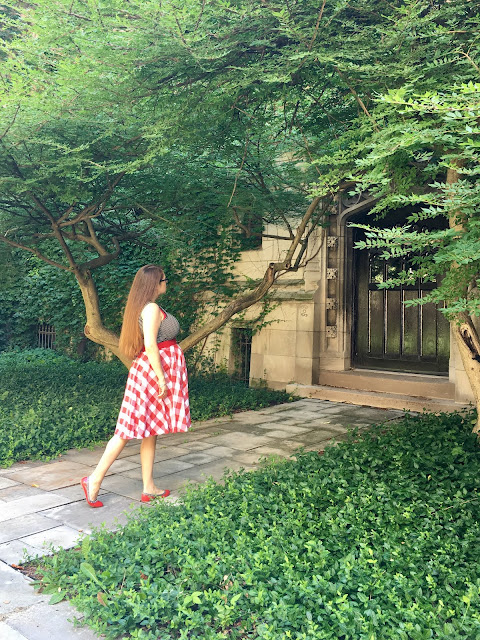 I'll let looking away be my only negation of things that aren't my style. (Thanks, Nietzsche, for letting me use another one of your famous lines out of context!) 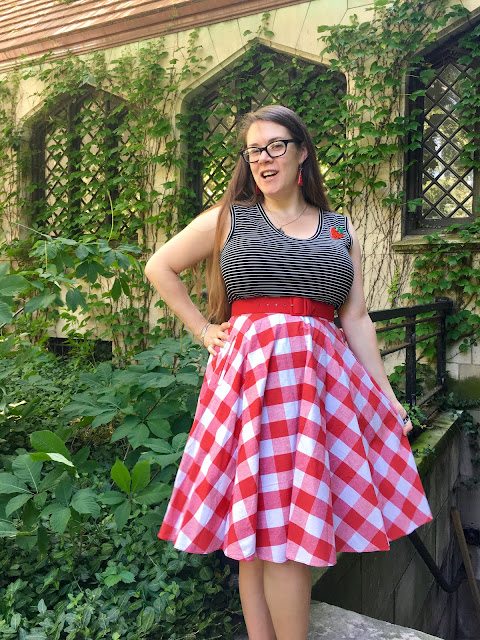 I've said it so many times, but the supportive community vibe I've found in the retro-style world is one of the most positive things I've experienced in the past few years. And so when that space comes under attack from misguided idiots, I've gotta do my part to defend it, and remind all the lovely people I've come to value so highly that they are wonderful and the trolls are wrong. Won't you join me?

Facebook
Google Plus
Bloglovin'
Posted by Emily at 5:47 AM