You're probably thinking "Emily, Christmas was over a week ago, why are you still blogging about it in early January?" Well, to make a long story short, I was super busy getting ready for our epic family Christmas dinner, and didn't have a chance to share my super-festive day in New York City with you until now. But I did see an awesome show (which will be in LA at the end of this month!) and eat pizza, so it's worth sharing now!

Growing up so close to Manhattan, I rarely went in and did the typical 'Christmas in New York' things. That was for tourists, ya know? Well, tourists and people who don't mind crowds, and neither of those things really described me. That said, New York at Christmastime is gorgeous, so even though I knew going in would be an uphill battle against the crush of humanity, my sister and I opted to head in three days before Christmas. 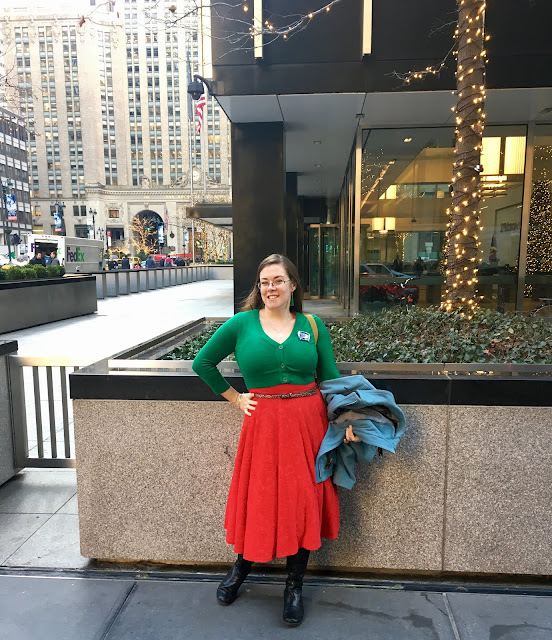 I already miss these unabashedly festive outfits.
We had lunch with our dad near his office, and then set out for our first stop: karaoke! (Yes, I know this isn't especially Christmassy, but I did try to sing that Bowie/Bing Crosby duet with Ronnie.) Karaoke is one of my favorite things to do any time I'm in New York for more than a long weekend, since it involves making noise and singing. Also, I spent a semester in Japan. Karaoke is everything, and one of these days I need to write a post devoted to my top 10 karaoke standbys. 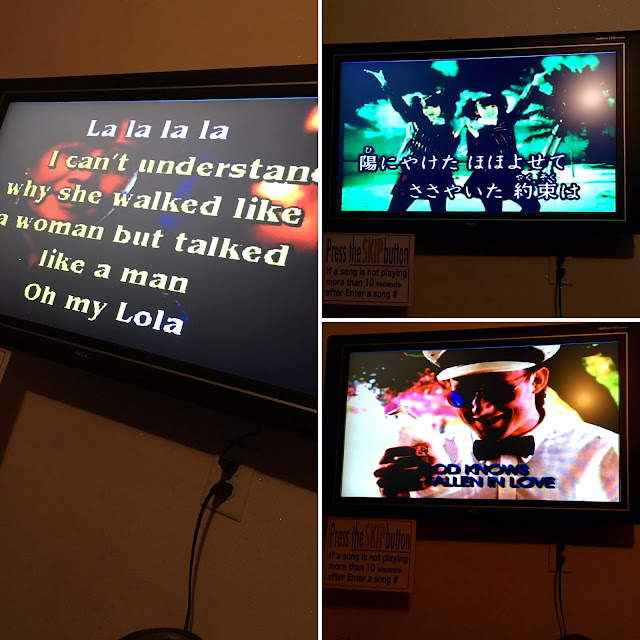 You cannot imagine how pumped I was to finally find that J-Pop song on the right!

Anyway, we headed over to Duet 48 and sang our little hearts out in a tiny room for a few hours, before grabbing some bubble tea. We were planning to go to a show in Brooklyn that evening, and I halfheartedly suggested going to see the tree at Rockefeller Plaza. Ronnie was interested but not exceedingly so, but when we realized we needed to head up there anyway to get the subway, we decided to have a peek. I saw the Christmas displays at Saks from a healthy distance (since there were MASSIVE crowds and barricades and such), and then we strolled past the tree. It's probably been almost two decades since I went to see the tree, and I'm happy to report that it's just as massive and impressive as what I remember from my childhood! 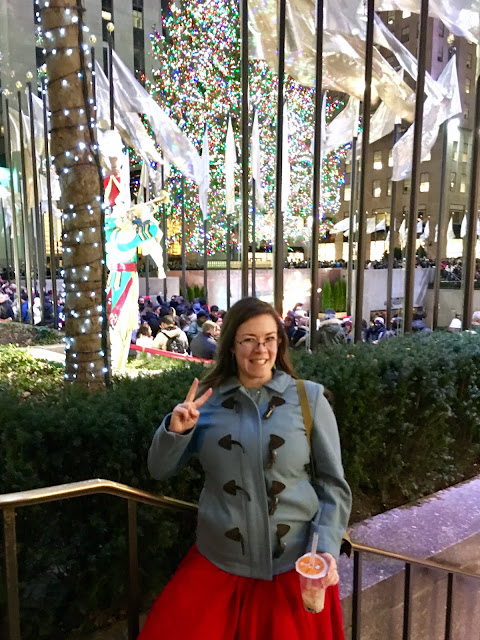 Who drinks bubble tea when it's 35 degrees out? Someone who lives in Chicago, that's who. 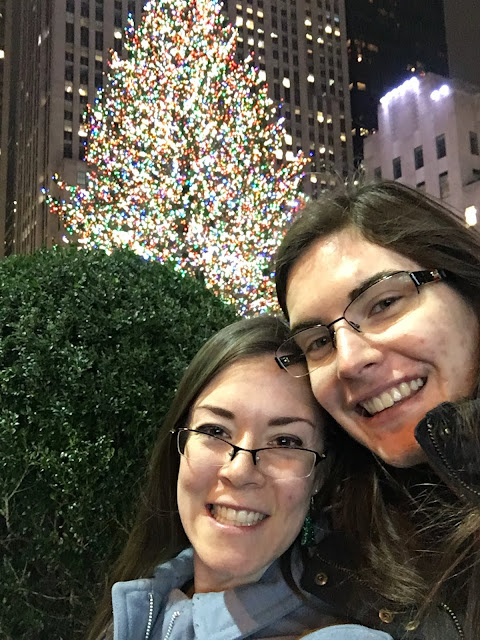 This selfie holds the land-speed record for quickest photo taken. 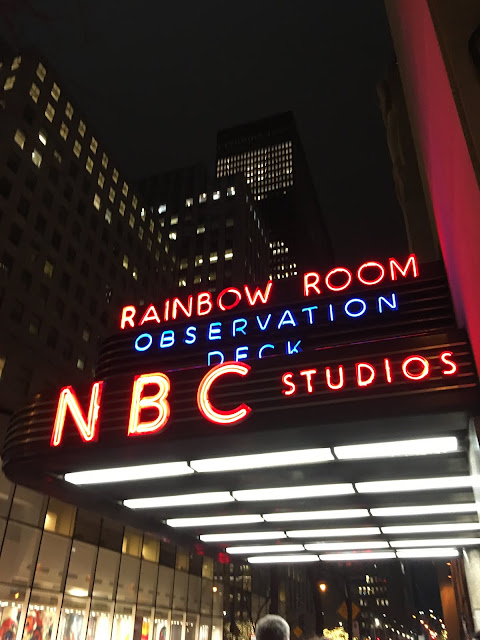 We caught the train to Brooklyn and found our way to the Bell House, to see Eliot Glazer's "Haunting Renditions." This show was described to me as 'this guy takes bad old 90s songs and reworks them, and there's gonna be a cello,' so while I wasn't quite sure what to expect, I was super excited for it. (There's always room for cello, after all! Also, I've been waiting almost a year to find an excuse to make that joke on the blog.) 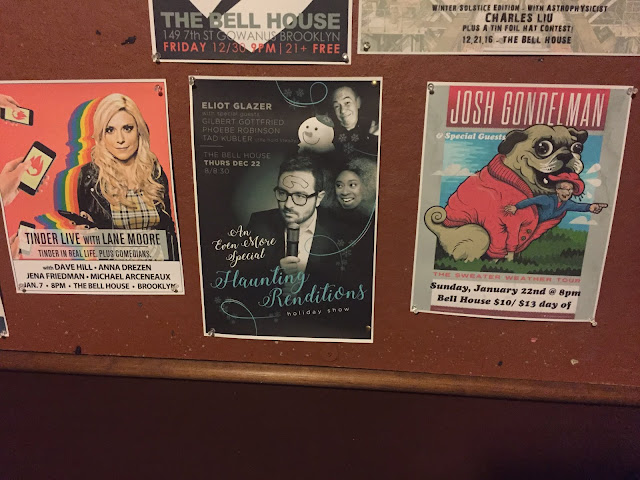 That's not graffiti on the poster… 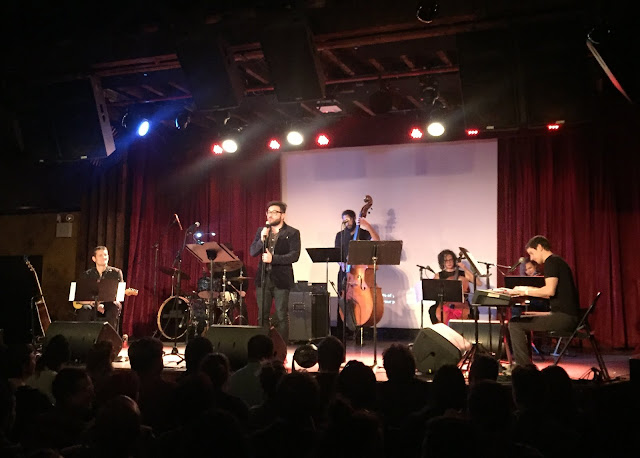 There was also room for a stand-up bass omg.

Anyway, whatever expectations I had were totally surpassed by reality. First of all, the Bell House is a super cool venue, and small enough to make for a great intimate show. More importantly, though, Eliot Glazer is seriously talented as both a singer and a comedian, and the show had just the right balance of jokes/monologues/bits to musical numbers. I'm telling you, you haven't lived until you've heard Next's "Too Close" (and if you're a 90s kid, you know that song) reworked as a loungey, piano-heavy slow jam. I'm pretty sure the highlight of the show, for me, was the last song: Ginuwine's 'Pony,' arranged for three-part harmony, though his approach to 'California Gurls' was a massive improvement on Katy Perry's original. 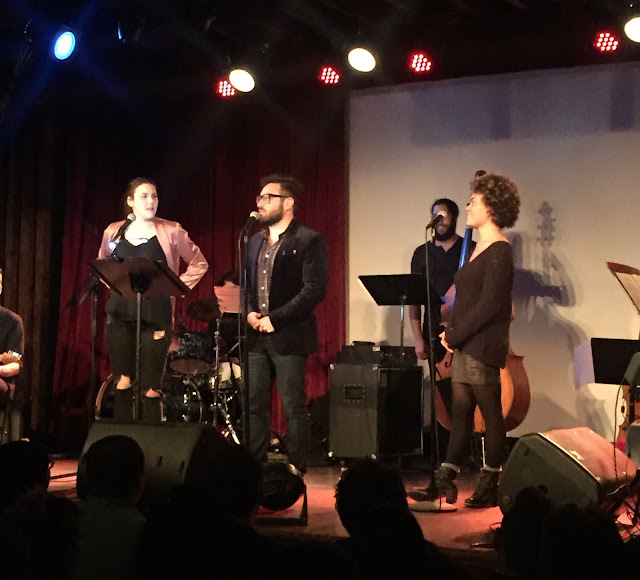 He'll be performing in LA on January 28th at the Echo, so if you're in the area, check it out (and say hello to my old favorite place for me)!

We had such an amazing time at the show, and got to see my college roommate Heidi and her bandmate Kiri. After the show, we hopped in Heidi's car for the highlight of the evening: midnight pizza at Vinnie's! While I'm usually all about plain pizza, I couldn't resist an eggplant parm slice. I blame all of the puns they had all over the walls and menu. If you're ever in the area, I highly recommend that you stop in for a slice or two. (And if you do, be sure to check out the ATM and the trash can. They might make you snort-laugh.) 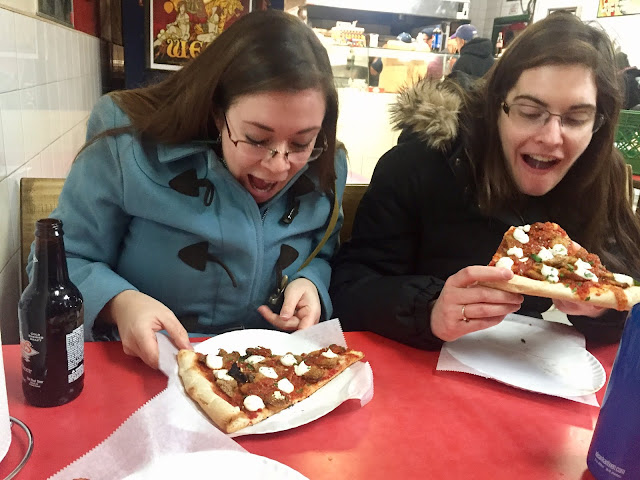 Apparently this reaction to pizza runs in the family.

Afterward, we headed back to Grand Central to catch the train home. The station was festively lit and relatively empty, so I snapped a couple more photos before we settled in for the late-night ride. 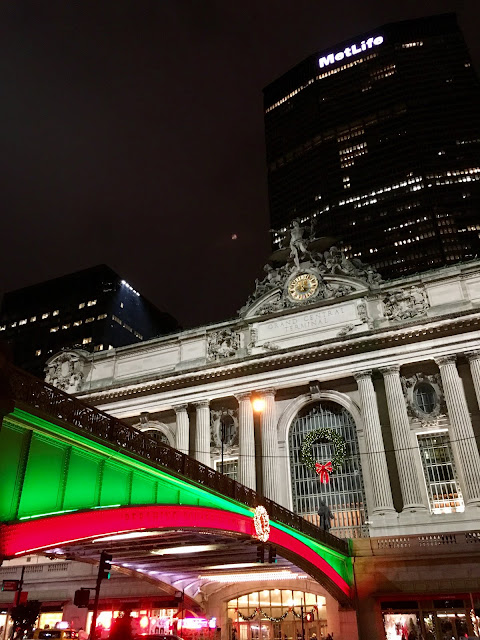 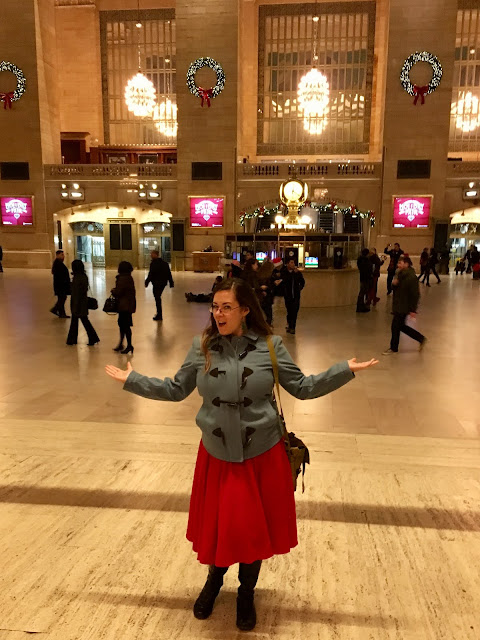 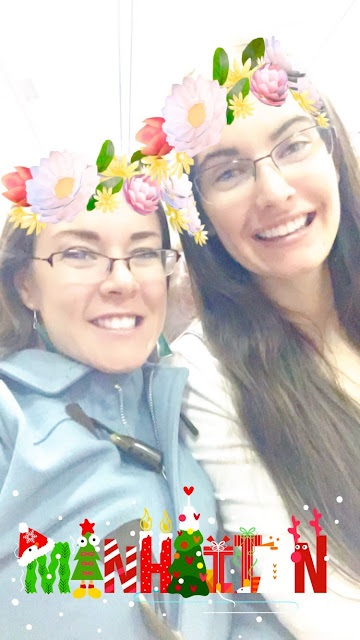 What did I learn from our foray into New York at Christmas? Let me sum it up. 1) Daytime karaoke > nighttime karaoke (it's cheaper and hardly anyone is there, decreasing the chances that you'll hear some vile song from another room on your way to the bathroom.) 2) Touristy places are always mobbed, so prepare yourself and only venture into the thick of things if you don't mind being jostled and/or waiting a lot. 3) Brooklyn is not a madhouse, and has excellent pizza, so just go there. 4) Bad songs are instantly better if you add a string section and a singer with an amazing voice. If you live in LA, you've got to check out Haunting Renditions! 5) I will probably venture into Manhattan at Christmas again, because dang, it's so festive!

Facebook
Google Plus
Bloglovin'
Posted by Emily at 5:02 AM