How to Cook for a Hungry Crowd

Without question, my favorite thing about Christmas Day is preparing an epic feast for my entire family. I literally look forward to it for months. To me, feeding the most important people in your life is one of the truest acts of love. I've been in charge of Christmas Dinner for going on five years now, after the previous chef was deposed in a coup d'etat by a council of concerned Hallocks who wanted to eat Christmas Dinner on Christmas, rather than in the wee hours of Boxing Day. After cooking so many holiday dinners for fifteen people who eat enough for twenty, I've learned a thing or two about getting everything on the table and still having time to change into my Christmas frock. Without further ado, I am delighted to present some of my secrets to cooking for a crowd. 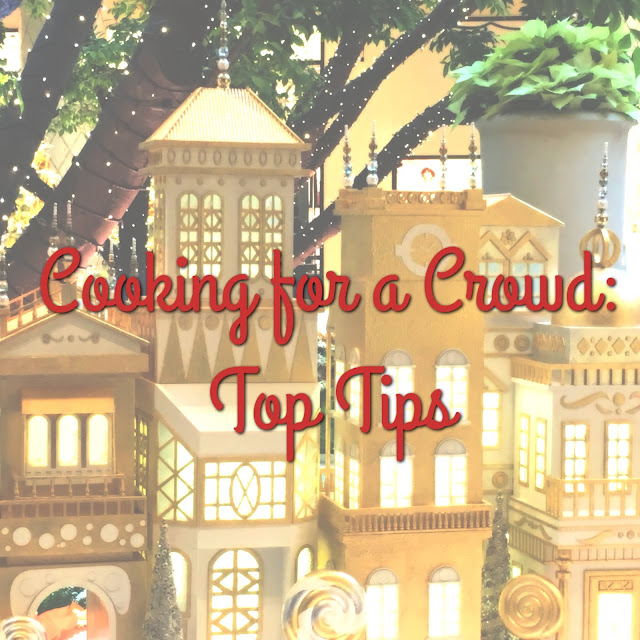 While I'm usually 100% in favor of winging it in the kitchen, this just isn't an effective approach when cooking for more than just my immediate family. When you cook in mammoth quantities, a game plan is absolutely vital. Since you'll be juggling a number of dishes while contending with limited oven/stovetop space, fridge space, prep space, and serving/cookware, it'll save you tons of stress and confusion if you map it all out in advance. 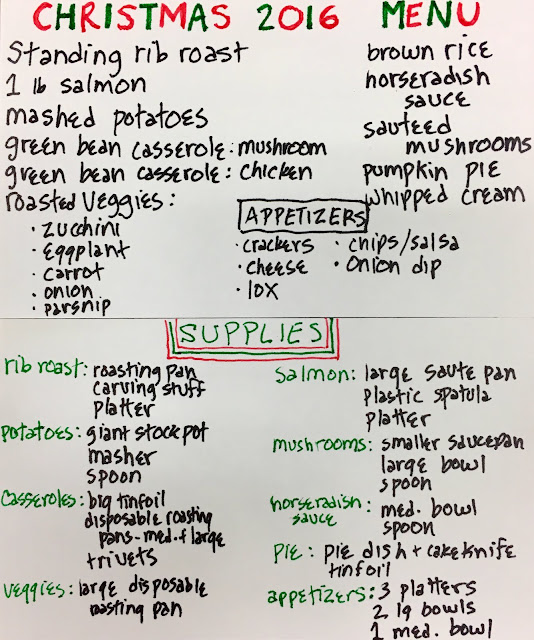 Festive color-coding makes this easy to read at a glance, and fun!

I like to start with the menu. On Christmas, this always involves the same basic things (roast, potatoes, veg, casseroles, dessert), though I find writing it out is a good first step toward building the rest of my plan. It also doubles as my shopping list for Christmas dinner. Bonus: a written menu keeps me from forgetting the mushrooms and discovering them on Boxing Day, sad and uncooked in the fridge, or leaving the horseradish sauce in the fridge until remembering, midway through dinner, and squeezing my way past seven of my nearest and dearest to get out of my seat and retrieve them. (Not that these things have ever happened, and certainly not on Christmas Day 2014 or anything like that. The one year I decided to go without a written plan...)

When making the menu, I also like to write up a list of the cookware/serving items we'll need. This helps me to 1) make sure we have the right things before the shops close for the holiday, and 2) know what we need and get it all laid out ahead of time.

Once I have the menu sorted out, I write up a timeline. This is the single most important reference for the day-of: it's my roadmap to the cruel logistical puzzle that is cooking for a crowd in a house with one oven. Since we don't have a second oven to use for casseroles while the roast cooks, I have to be sure to think about where/when I'll cook everything ahead of time. I try to do as much on the stovetop as possible, and time things like the potatoes so they won't need to go in the oven to stay warm before dinner. We also use our grill as a second oven for the veggies, which aren't as finicky as a roast. This year, I've also made a chart with everyone's meal-related tasks on it, because I am a control freak and love being the five-star general in the Battle of Christmas Dinner. (Well, that and because I'm hoping a list of tasks will cut down on those moments of 'OMG! We need a serving dish and I can't reach it/I forgot about this thing, can somebody do it?/dinner's ready but we don't have any cutlery!) 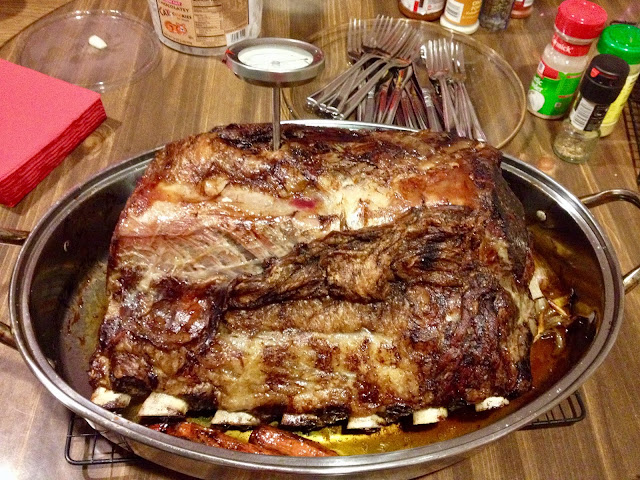 I'll gladly eat this every Christmas!

Now, you might be thinking 'of course she'd advise this, since she's such a creature of habit,' but I've actually got a good reason for this. While surprises are great for plenty of things, they're not something you want with 15 hungry people waiting for a meal on a day when everything except the Chinese restaurant around the corner is closed. If you screw up some fancy thing you've never made before, everyone will have to wait while you 1) cry, hide in the bedroom, and stop crying, and 2) rummage through the pantry for emergency pasta. (Thankfully, this one actually hasn't happened to me. But if it did, I'd throw myself on the floor and cry like my three-year-old godson does.)

Think of it this way: a theater wouldn't put on a show without a dress rehearsal, and you shouldn't debut something you've never attempted before with a very large and hungry audience.

I'll admit that I broke this rule in 2012, when I made standing rib roast for the very first time. Even though it miraculously came out perfectly, the three and a half hours between putting it in the oven and carving it were agonizing. 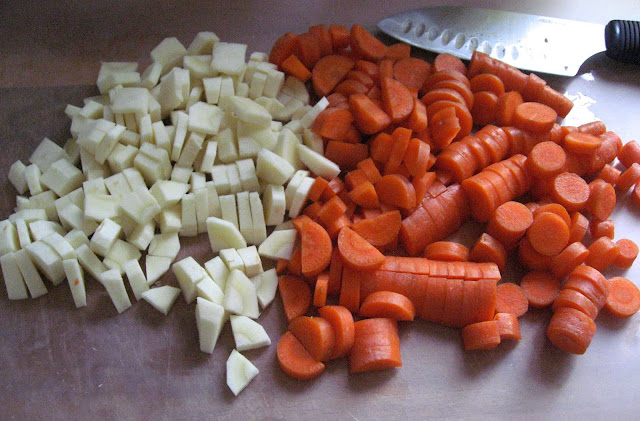 There are obviously some things that can't be done till the day-of, but everything you can do the day before will save you stress during the real cooking action. I like to chop the vegetables and mushrooms in advance and put them into containers in the fridge till it's time to season and roast them, and this year I might try making the horseradish sauce the night before. Baking is also an ideal day-before task, since pies will keep nicely overnight and you'll need all the oven space you can get on the day of.

I'm not too sure about peeling potatoes the day before, but I like to get the potatoes peeled a few hours before all the casserole/stovetop action really gets going. Once they're peeled, we pop them into the pot, cover with cool water, and let them hang out till it's time to boil them.

Clean as you go.

At my parents' house, I embrace my aunt's rule that those who cook don't have to clean, because I hate cleaning. That being said, I always clean whatever I can as I'm cooking, since it's really hard to wash dishes after dinner with a sink full of the things you used to make dinner! Also, we don't have one of those bottomless cabinets full of an endless supply of dishes and bakeware that TV chefs must have, so we often need to reuse mixing bowls and the like. 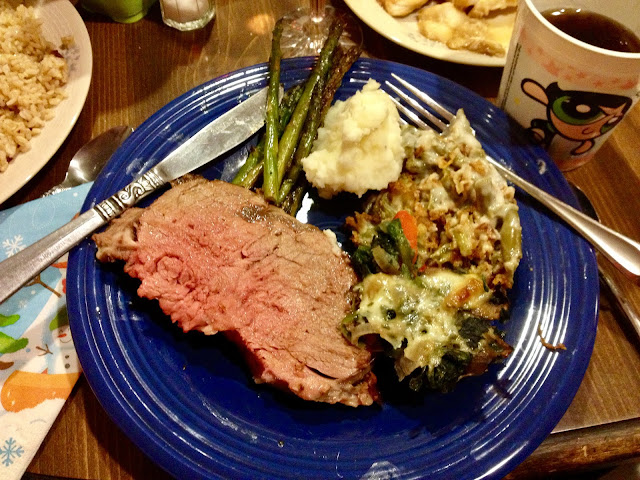 The perfect holiday plate. (Yes, that is a plastic Powerpuff Girls cup. Only my clothes are fancy!)

Every time the holidays approach, the Food Network airs a ton of holiday-cooking specials aimed at teaching the home cook to 'elevate the classics.' In other words, I've watched countless hours of Bobby Flay telling me to stop making those boring old canned green beans with Campbells mushroom soup and ready-made fried onions, and do it from scratch.

F that. Does anyone really want to faff about with trimming three pounds of fresh green beans, frying onions (and dirtying a frying pan!), sauteing tons of mushrooms in a separate skillet (which will also need to be washed!), building a bechamel sauce, and putting it together, just so that all of your relatives can silently wish you'd made the same thing they've eaten since childhood?

On any other day of the year, I make everything, including my salad dressing, from scratch, and cook a variety of sides even when it's just Jeff and me. But on holidays, I give the people what they want: copious amounts of meat, an entire 5-lb bag of mashed potatoes, and simple veggies. The result? Less prep, fewer dishes, and happier bellies!

Cook in things you can serve in. 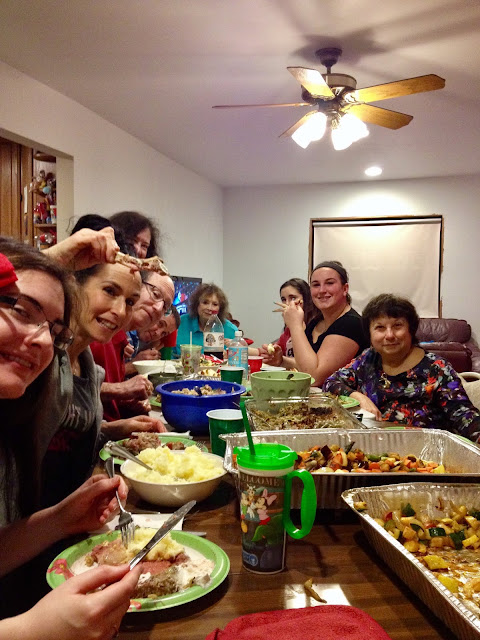 Not a fancy tablescape, but satisfied diners nonetheless!

I admire people who set an elegant table with matching serving platters, but our kitchen is too short on prep space to re-plate food for service, and nobody wants to do extra dishes. All my family really cares about is how it tastes, anyway!

Buy more than you think you need, then add a little more!

I come from a proud tradition of good eaters, and learned very early on to make twice as much food as a reasonable person would, to avoid the dreaded Not Having Enough. (Among other things, my upbringing prepared me in this way for the Herculean task that is making enough food for Jeff.) Better to get too much than not enough!

Take all the help you can get! 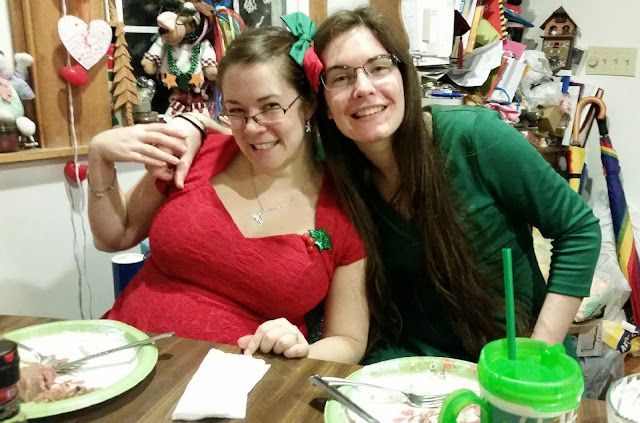 The best sous-chef on the planet!

I've made big meals entirely on my own (exhibit A: all of my Thanksgiving meals away from home), but I wouldn't be able to get Christmas dinner on the table without my Little Chef and my mom. (It's also a lot more fun to cook with Ronnie! I especially missed my Little Chef this past Thanksgiving.)

If you're cooking for a crowd, that means you've got plenty of potential helpers! If any of your guests asks 'Can I bring ______?' then for the love of all things holy, say yes. In addition to the time and oven/fridge space this will save you, this can lead to some really lovely traditions! 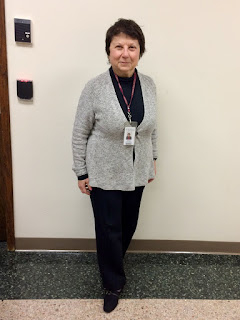 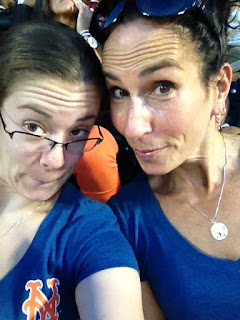 Two of my aunts: Vicki (wearing a lovely jacket she bought during a visit to Chicago earlier this year!) and Cheryl (not pictured: her truly impressive muscles!)

In my family, my aunt Vicki started bringing lox and wine several years ago, and I look forward to that lox with a glass of wine from the minute I start cooking on Christmas Day! My aunt Cheryl brings roasted spinach/veggie/egg balls in muffin cups, which are delicious both with dinner and reheated for breakfast on Boxing Day, and round out our selection of sides perfectly!

Don't drink till you put the knives away.

We don't crack the wine open until people start eating, which is a very good thing, as I tend to get lazy, forgetful, and tired when the wine starts flowing. I'm also clumsy under the best of conditions, so I wouldn't want to try to chop things with a Very Large Knife if my senses were in any way impaired. Safety first, people!

So there you have it: my secrets for getting dinner on the table for a ravenous crowd! Do you have any pro tips or strategies of your own? If so, I'd love to hear about them -- drop me a line in the comments!

Facebook
Google Plus
Bloglovin'
Posted by Emily at 2:08 PM

Email ThisBlogThis!Share to TwitterShare to FacebookShare to Pinterest
Labels: Christmas, cooking, entertaining tips, how to