As I mentioned in my first Restorative Recipes post, I make more of an effort to cook healthy food because most of our jaunts involve All the Meat. In honor of #FitnessFriday, I'm going to share my secret weapon for all manner of vegetable-packed goodness: the World’s Easiest Salad Dressing™. I haven't bought dressing in almost two years, because I'm not too keen on eating things with unpronounceable ingredients these days. Making your own dressing takes almost no time, is super delicious, and as a bonus, it'll impress your dinner guests and your mom. The absolute easiest version of this dressing uses apple cider vinegar, but I like it with lemon juice for many of the dishes I make. 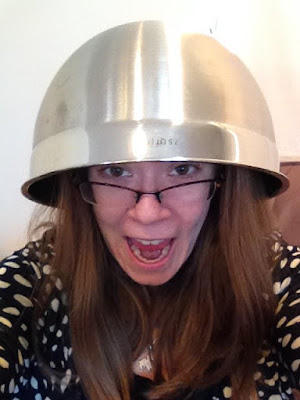 Christmas 2014, when I received my kitchen MVP/favorite hat. 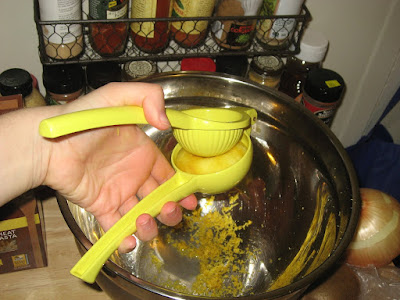 First, pour your acid (vinegar or lemon) into the bottom of your salad bowl. If you are using a lemon, wash it, cut it in half, and squeeze it into your bowl.

See those yellow bits in the bottom of the bowl? That's a trick from Advanced Placement Vinaigrette Making: zesting your lemon. This adds a few minutes to the process, but is totally worth it unless the prospect of zesting a lemon makes you want to give up entirely. (For me, it's sometimes a deal-breaker.) If you want to make extra delicious lemon vinaigrette, zest only the yellow part of the rind into the bowl before you cut the lemon in half. Once you see the white pith under the yellow rind, move the zester over to an unzested portion of the skin. 'Zest' is one of those words that starts to lose all meaning if you type it too many times in rapid succession. 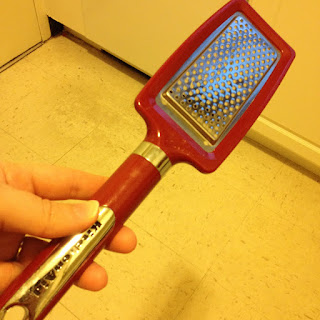 This is my crappy microplane grater, which I use to zest things. It doesn't work as well as my mother's. I want one like hers, but I already have this one, and can't justify just throwing it out.

Once the vinegar/lemon juice (and zest, if you're feeling ambitious!) are in the bowl, throw a healthy pinch of salt, a few grinds of pepper, and a teaspoon each of honey and mustard into the bowl. I'll often add a dash of garlic powder at this stage as well. Then, grab the olive oil and something to stir it in with. I like to use a small whisk, but a fork will do in a pinch (i.e. if I was too lazy to wash the whisk and it's still sitting in the sink.) Stir the honey, mustard, and vinegar/lemon juice together a bit.

If you don't like mustard, you can leave it of course, but I'd suggest putting a dash of onion powder, garlic powder, and/or whatever seasonings you like on your food (oregano, cayenne, coriander powder, etc) to give it a little more flavor. Since the mustard helps to emulsify the dressing, you'll want to whisk super vigorously if you leave it out. Also, make sure to have your salad ingredients ready to dump into the bowl as soon as you're done whisking, so that the dressing doesn't have a chance to separate (this is a good idea even if you do use mustard, but it's more important if you leave it out). 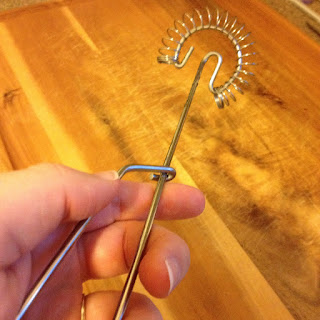 This unimpressive-looking contraption completely makes up for my crappy microplane. It's the best salad-dressing-emulsifier I've found, and it cost about $3 at Ross Dress for Less.

Now, slowly pour in the oil as you whisk the living daylights out of the mixture. I like to use about twice as much oil as vinegar/lemon juice, but I like a fairly acidic dressing. If you like a milder taste, use closer to three times as much oil. Whisk it until the mixture looks a little cloudy and everything is totally combined. 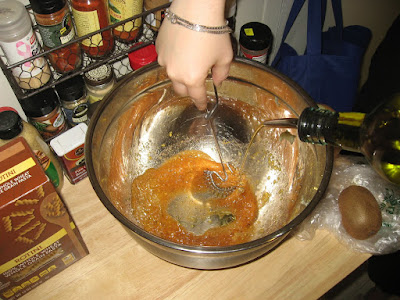 It's a two-handed job! Look how hard I whisked this sucker. That's what you need to do to get it properly mixed.

Once it's nice and emulsified, taste it and adjust the seasonings if need be, then toss your salad into the bowl and enjoy!
Posted by Emily at 7:10 AM