Calling all space/astronomy nerds! There's a big event coming on August 21: a total solar eclipse! For the first time in quite a while, the path of the eclipse will cut from coast to coast of the United States, and I'm actually going to get a pretty good view in Chicago at midday. I've already planned my entire day around getting to Chicago's Adler Planetarium for the eclipse, though I still need to assemble a kit for safe viewing. 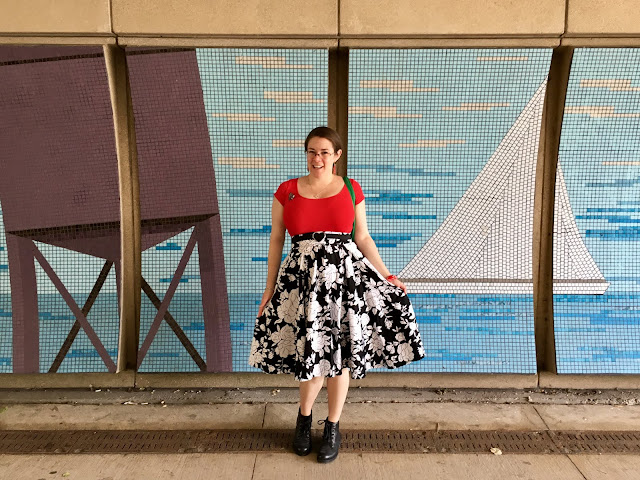 Why go to the Adler, you ask? Well, to answer that, I'll need to share one more bit of our babymoon adventures from earlier this summer!

I've always been absolutely fascinated by space and astronomy. As a kindergartener, I had Isaac Asimov's Birth and Death of Stars checked out from the school library for almost the entire year. My mom will occasionally recount the tale of her first parent-teacher conference: my reading teacher told her that I'd come in and explained that the Sun shines because of nuclear fusion, and went on to detail the difference between nuclear fusion and fission. As an elementary schooler, I spent most Monday holidays at the American Museum of Natural History in New York or the Liberty Science Center, and my absolute favorite part of those trips was going to the Hayden Planetarium.

So when Jeff and I came up with our Chicago staycation idea last year, the Adler Planetarium was at the top of my to-do list! We had such a lovely time last summer that we decided to go again during our babymoon. 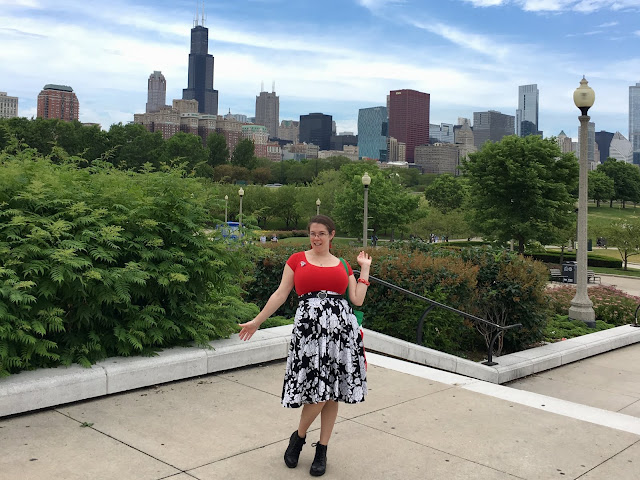 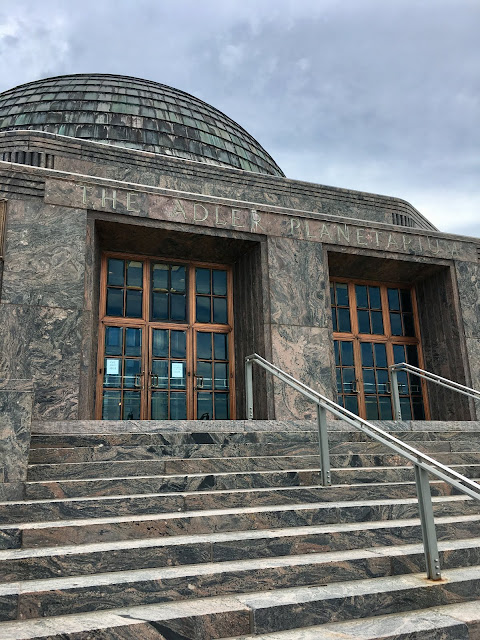 The Adler is located right on the lakefront in Museum Campus, meaning it's well serviced by public transit and absolutely beautiful in the summertime. (This also means I'll be able to get there quite easily to watch the eclipse during my lunch break next Monday!) They have a good mix of permanent and temporary exhibits, so there's always something neat to see. When we went in June of this year, for example, they had an exhibit about eclipse chasers (people who travel around to view eclipses as a hobby), which got me super excited about the upcoming eclipse.

We spent quite a bit of time in my favorite exhibit: Mission Moon. The exhibit features some of Jim Lovell's personal memorabilia, as well as a mockup of a Mission Control workstation, some fun interactive displays about Apollo 13, tons of information about Projects Mercury, Gemini, and Apollo, archival footage from television and radio broadcasts, and the piece de resistance: the actual Gemini 12 capsule from Jim Lovell and Buzz Aldrin's 1966 low-Earth-orbit spaceflight. 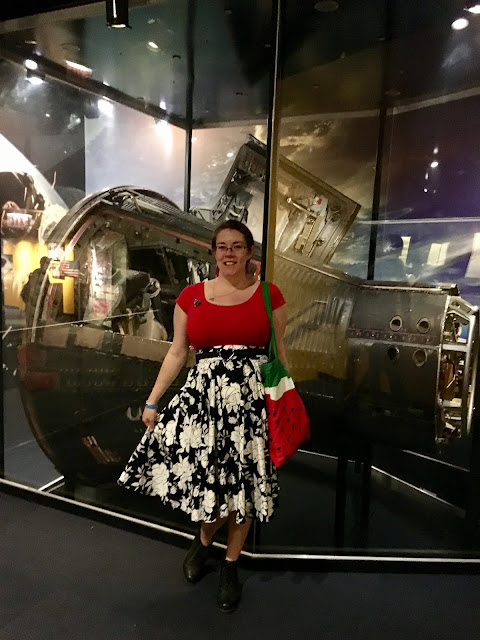 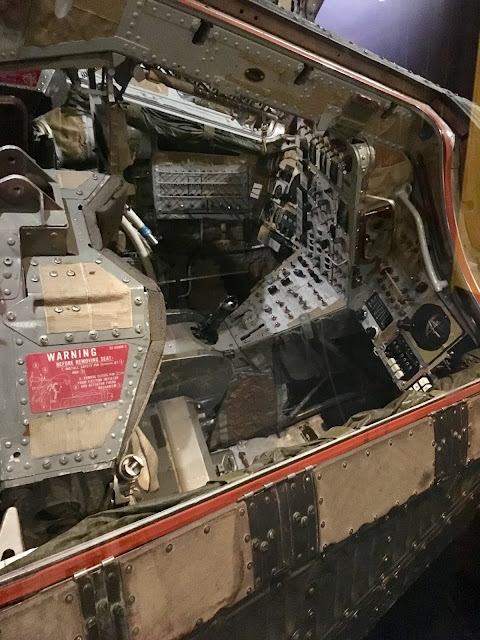 Interior of Gemini 12. Can you believe two adults spent almost four days crammed into this space (except for brief EVAs)? 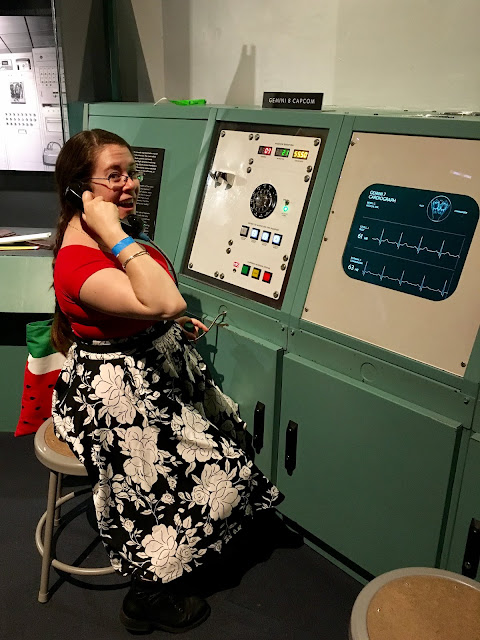 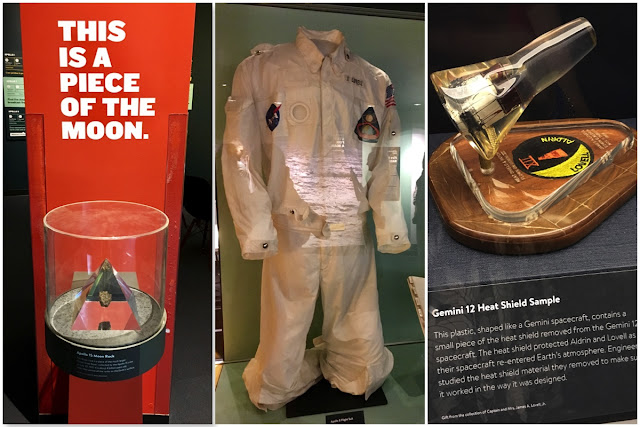 Other highlights of Mission Moon, including Jim Lovell's spacesuit, a moon rock, and a piece of the Gemini 12 heat shield.

I'm not going to lie: my favorite part of the exhibit is the screen showing the Apollo 8 Christmas Eve broadcast, where the crew read the beginning of Genesis. The last line of the broadcast always, always gets me right in the feels:


"And from the crew of Apollo 8, we close with good night, good luck, a Merry Christmas, and God bless all of you -- all of you on the good Earth." -- Frank Borman

I'm not even religious, but that message of unity at the end of an exceedingly tumultuous 1968, broadcast from the first circumlunar flight and the first crew to photograph the entire Earth from space, just moves me. 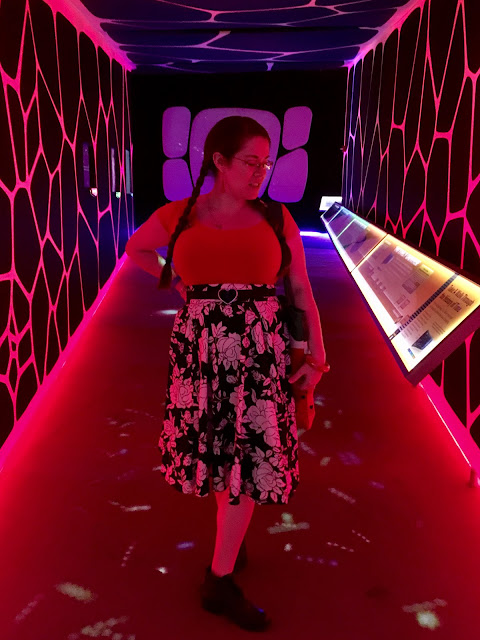 Another highlight of the Adler's permanent exhibits is 'the Universe: a Walk through Space and Time' (or, as I like to think of it, a brief history of the Universe, part I). Every time I've gone through that exhibit, I come away with a renewed sense of just how small an individual is in the cosmic scheme of things.

I also really enjoy the exhibit on astronomical instruments and artifacts. They've got astrolabes, armillary spheres, and telescopes aplenty, and I always find myself quietly singing the Game of Thrones theme to myself as I look at armillary spheres from centuries past. (Many people incorrectly assume that the burning thing in the credits is an astrolabe. It's an armillary sphere, people ! #planetariumknowledge) 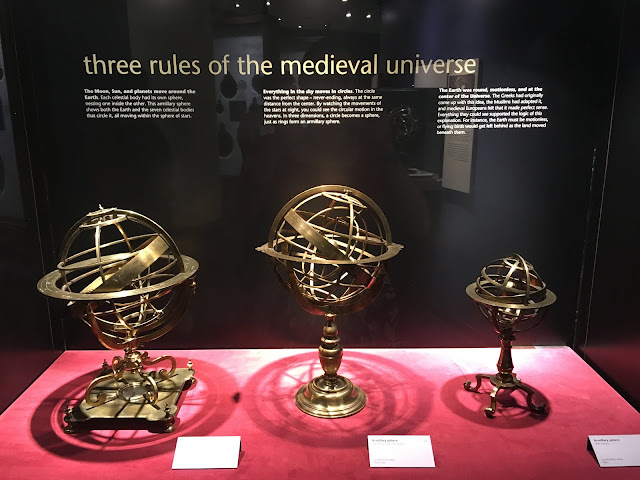 Jeff and I also walked through the exhibit on the solar system and spent far longer than is dignified making Uranus jokes. The solar system exhibit is right next to the cafe, and both have the most incredible panoramic view of Museum Campus, the lake, and the Chicago skyline, which made it the perfect spot to sit down, share the world's most perfect chocolate-chip cookie, and give my body a brief rest from holding up my baby bump. Before leaving, we stopped in the gift shop, where I expended all of my willpower to resist buying an adorable NASA astronaut onesie for the baby, before heading out for a massive barbecue dinner in the West Loop. 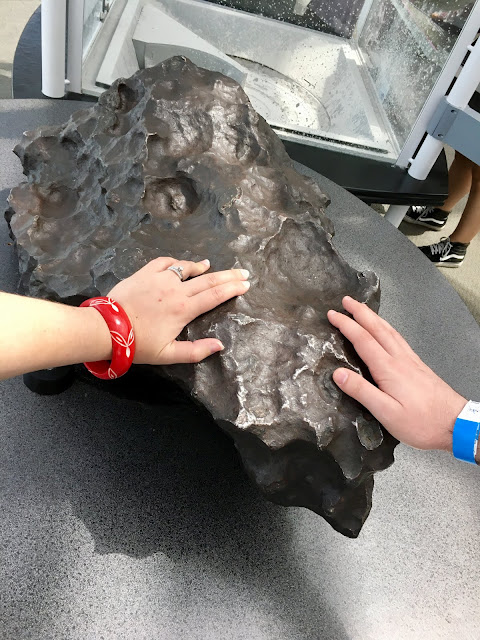 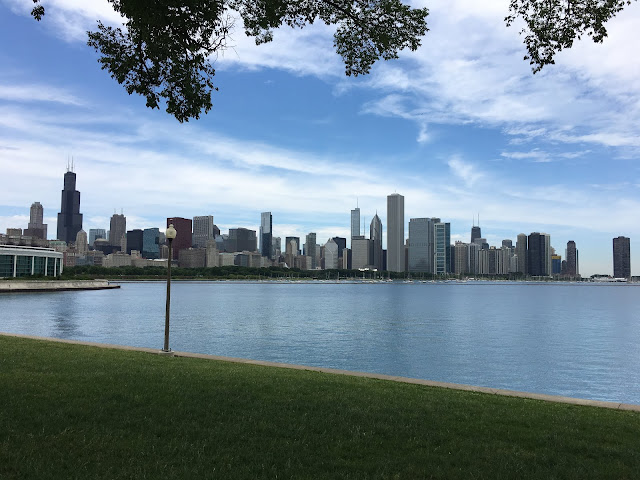 I'm so glad I was able to get back to the Adler with Jeff, and if you're looking for a great place to spend a day learning about the universe we live in, I can't recommend it highly enough! And if you're in Chicago next Monday and looking for the perfect eclipse-viewing spot, I'll see you at the Adler's Eclipse Fest!

Facebook
Google Plus
Bloglovin'
Posted by Emily at 5:44 AM