At this point, I probably don't even need to tell you how much I love the Kelly dress from Bernie Dexter. It may or may not be impossible for me to blog about this style without waxing poetic, but I'll try to keep a lid on my fulsome praise today, and instead focus on the important business: food! I've wanted to have brunch at the Promontory in Hyde Park for absolutely ages, and this past weekend, Jeff and I finally made it up there. I went there a few months ago for drinks with a friend, and thought it would be the perfect place to finally have brunch after over a year in Chicago. In a city filled with extraordinary food, Hyde Park isn't exactly a gastronomical Mecca, but the Promontory was one of the few places that reminded me of some of my old favorite spots in Los Angeles.

As it turns out, we went for a rather late brunch, which meant that I had time to work out before we left. Thus, when we arrived, I was absolutely ravenous and ready to seriously pig out. Jeff had made a reservation, so we were seated right away, but since there were plenty of seats, I think we could've gotten away without a reservation.

I ordered the Point Breakfast, which came with a mysterious thing called a mini beermosa. I wasn't entirely certain what this was, so I also ordered a Bloody Mary. [Bloody Marys are a superior brunch beverage because they come with their own snack!] Turns out that a beermosa is a classier version of the brass monkeys that my college roommate and I used to make when we were young and feckless. I think I preferred it to the mimosa Jeff got, but I'm a huge fan of beer, so your mileage may vary. 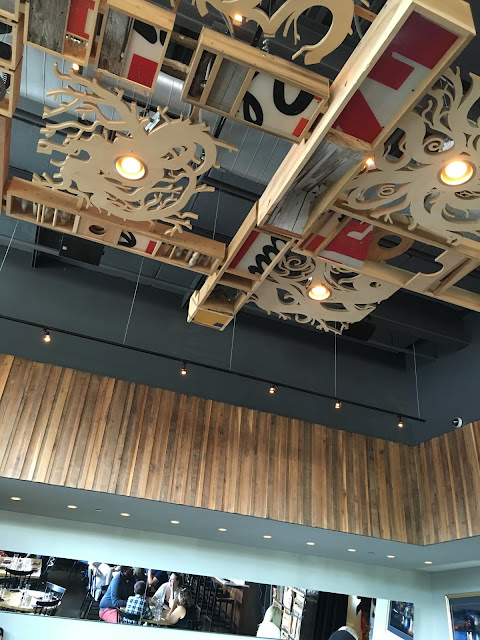 I'm not sure exactly what was going on with the ceiling, but I liked it! 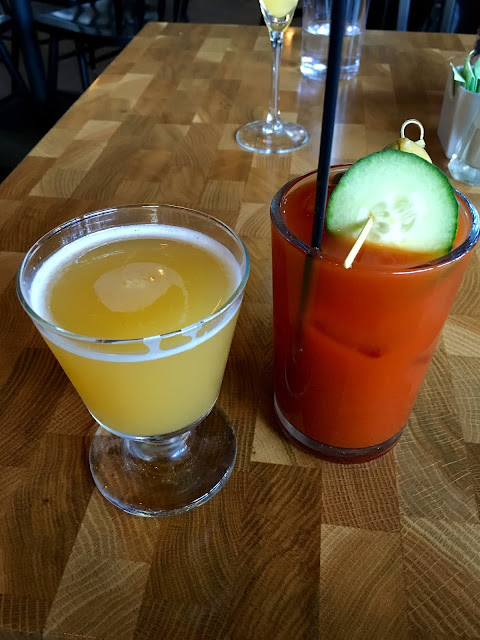 Having so many drinks at once makes me feel like my mom and/or my sister. My mom typically carries around more beverages (water, iced tea, etc) than she has hands to carry them in. 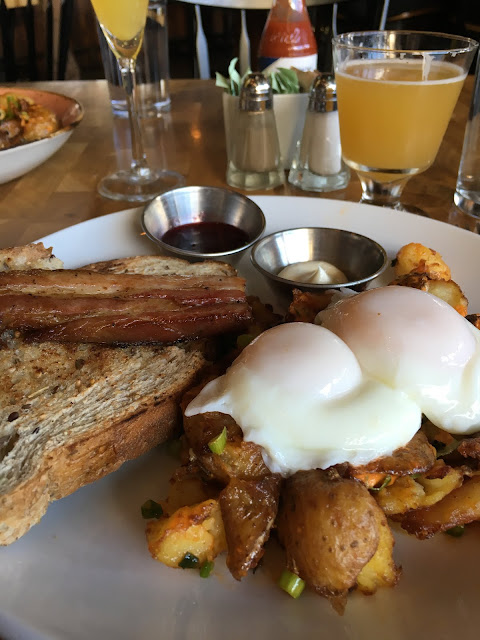 All of this went straight into my stomach, except for the bites I shared with Jeff. 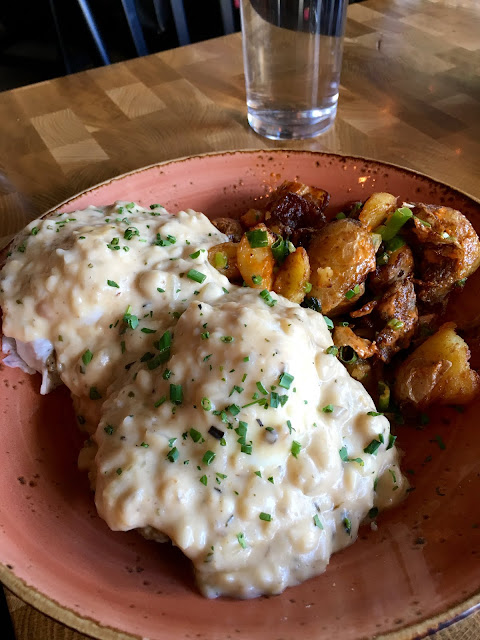 My breakfast was absolutely delicious: the Spanish-style patatas bravas were so much better than plain old breakfast potatoes, the poached eggs were perfectly cooked, the pork belly (!!!) was everything pork belly should be (e.g. crispy on the outside, tender on the inside), and the bread made my carb-loving heart happy. Jeff got the eggs benedict, which came with sausage patties, and I think I might try that next time, since it came with gravy instead of hollandaise. In my eyes, this is definitely an upgrade!

Overall, I thought the Promontory was an excellent brunch spot, and I've already started bugging Jeff about going back. They had a mac and cheese dish that sounded utterly decadent, and I'm hoping Jeff goes for that next time so that I can steal a bite or three!

We ended up walking home, so of course, I convinced Jeff to stop and take a few photos of the newest addition to my Bernie collection. I'm a huge fan of geography-themed prints, and as soon as I spotted New York State in the stock images for this dress, I knew I had to have it. I was hoping mine would have New York in a prominent spot. While New York sadly isn't front and center, my dress has California right over my heart, which seems quite appropriate!

The sizing on this dress is similar to my other Kellys, with the exception of the mums print (which runs a bit larger.) Measured flat, my size large is 15.5" at the waist and 19.5" at the bust, making it a perfect fit on my 31" waist and 39" bust. The fabric of this print feels a bit heavier than my kitchen, blue water,  mums, and leopard Kellys, which makes it drape extra nicely over my Malco Modes Zooey petticoat. I'm sure the extra heft to the fabric will come in handy once the weather here turns chilly! 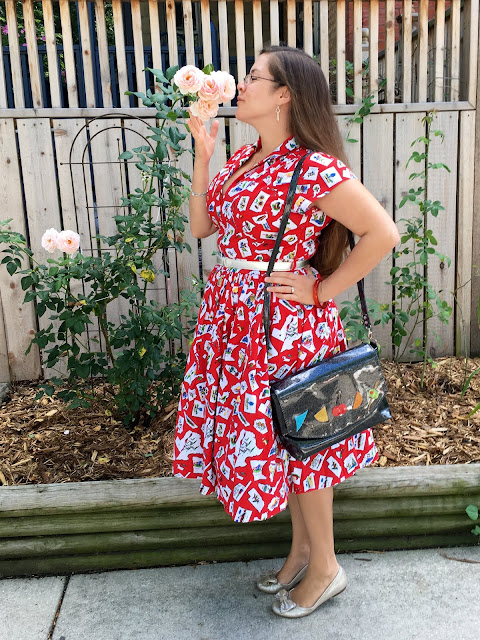 What has two thumbs and made multiple "stop and smell the roses" jokes while posing for this photo? 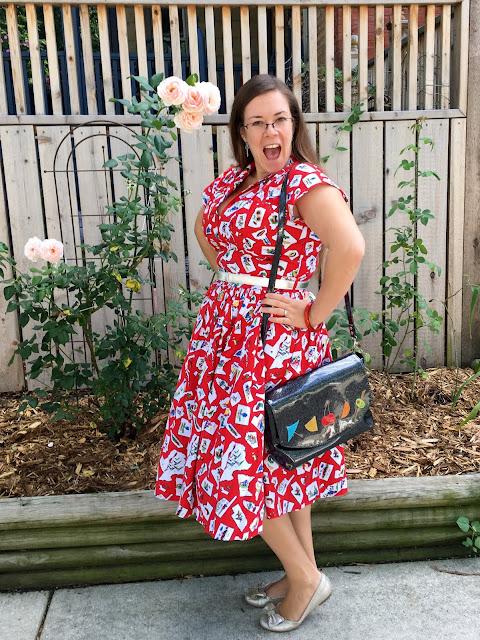 Seriously excited about the first petticoat-friendly weather of the season! 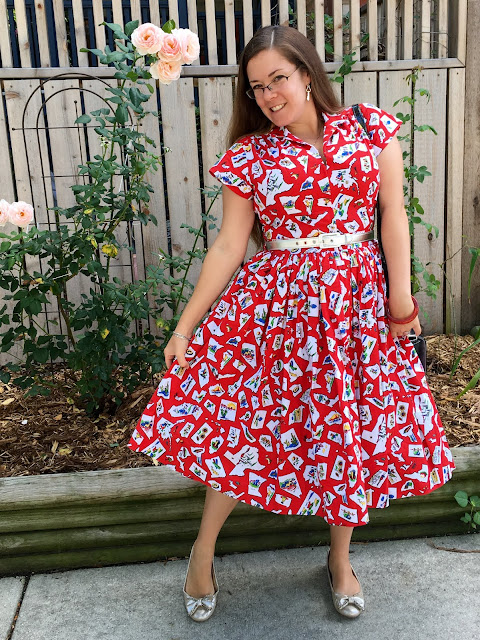 What's your favorite brunch food? I'm partial to corned-beef hash, myself, but anything with runny egg yolks makes me pretty happy!

Facebook
Google Plus
Bloglovin'
Posted by Emily at 5:29 AM