Sometimes, you just need to get the heck outta Dodge, which is why Jeff and I sometimes opt to drive out to a delightful barbecue joint outside even the most generous definition of Chicagoland's borders. Since we're planning to pay a visit to Baby Back Blues BBQ today (and might be there even as you read this!), I figured the time was ripe to post about our last expedition to Joliet, Illinois. 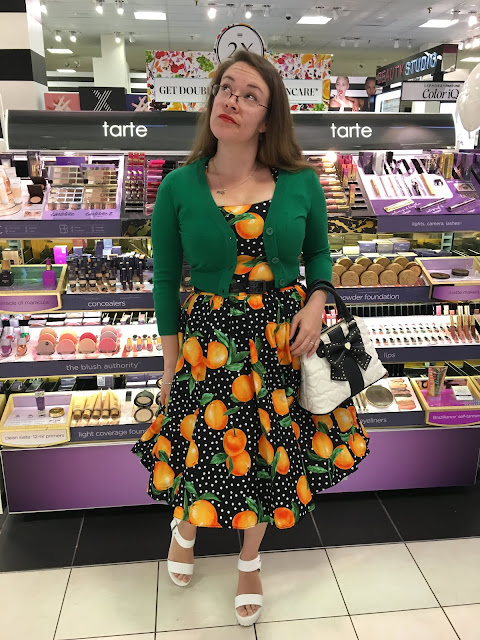 I was heartless enough to make Jeff take this photo in the middle of J.C. Penney's, but not heartless enough to drag him into the mini Sephora boutique behind me.
We stayed in Joliet the night before we finally arrived in Chicago last September, which was how we discovered the mall and the barbecue place, and we've been back a number of times since. Only two people who either 1) grew up in southern California or 2) spent most of their adult life in LA would think it makes more sense to drive for an hour to get decent barbecue rather than sit on a train for an hour, but we always come up with an excuse to spend the day wandering around Joliet.

For this particular trip, we were looking for neckties for the groomsmen in our wedding. This explains several thins: 1) why we went in every single department store at least once, 2) why most of my photos from this day involve me trying on ridiculous rhinestone-encrusted objects. (Ok, it doesn't really explain the second one. My magpie-like tendencies are a better explanation.) 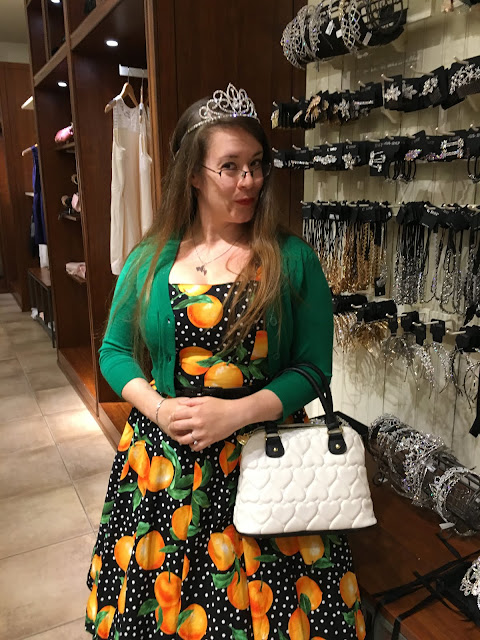 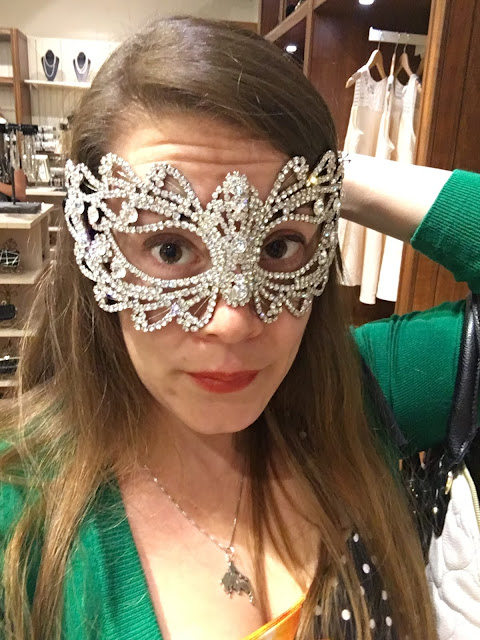 Charming Charlie's has something for every occasion!

The Louis Joliet Mall is not especially large, but since I do virtually all of my shopping online, it's something of a novelty to actually walk around a brick-and-mortar store. I certainly made the most of my time there by trying on increasingly ludicrous objects and asking Jeff for his opinion about them. 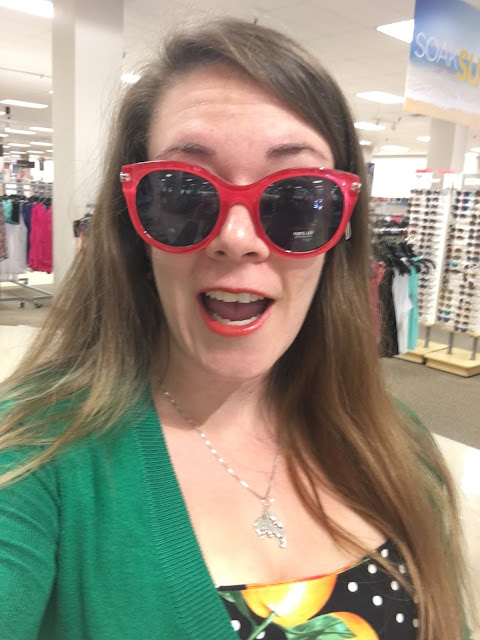 In retrospect, I actually wish I'd bought this sunglasses. I hope they're still there today!

While we had zero success finding three ties in my favorite shade of green, we both got new running sneakers and I got approximately three-quarters of a zillion comments about my dress, all of which were quite kind. (If you're curious, you can find just about any color and style of tie on Amazon, which is exactly what I did.)

To borrow (and mangle) a comment that Winston Churchill made about democratic government, the Veronique is my favorite Bernie Dexter dress except for all the others. I've raved about it before, in much greater detail, but it's still tied with the Kelly and the Chelsea cuts for my all-time favorite Bernie style. 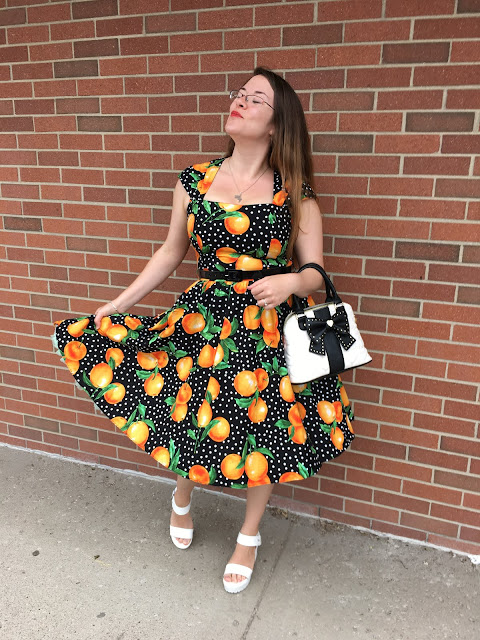 Halfway between an outtake and a surprisingly decent shot. 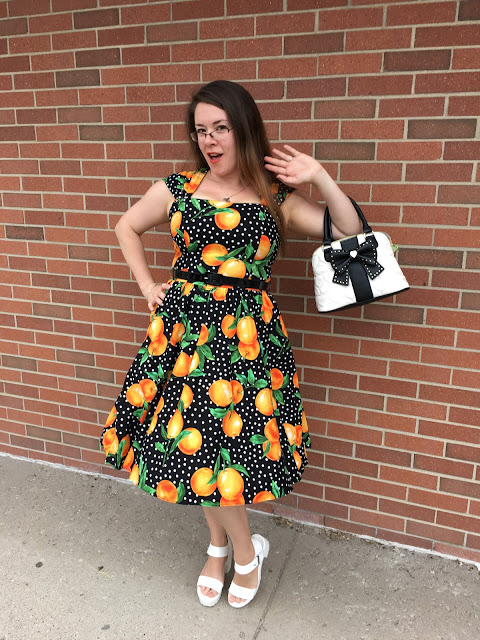 This is my "I'm about to eat so much smoked meat!" face.

Baby Back Blues BBQ is basically the polar opposite of the restaurant we tried on my birthday, but  hey, variety is the spice of life. It's a smallish place in a smallish strip mall off of a highway that's perpetually under construction, and seems to get a decent mix of construction workers, families, small groups of yuppies in business casual, and charming old people, which means it's my kind of place! 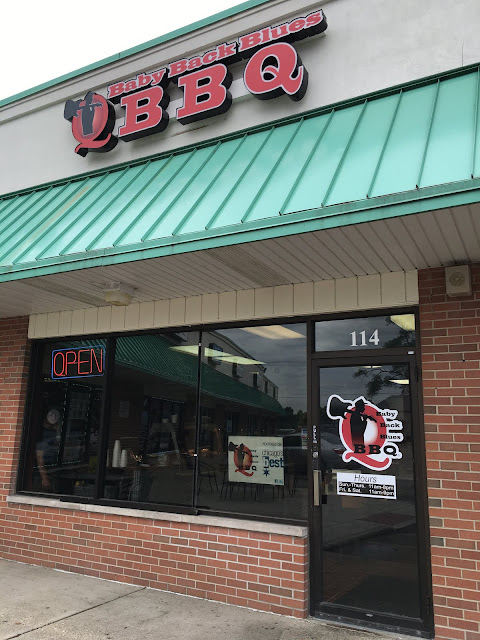 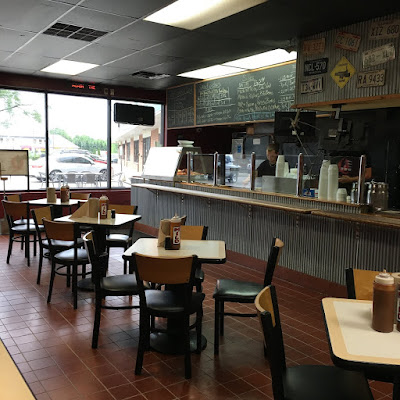 See all those empty tables? This is what happens when you go out for a hybrid lunch/dinner at 4pm!

The meat is delicious. I've had the brisket and the pulled pork, and neither have ever let me down. I usually get either the cucumber salad, mac and cheese, or beans with a 1/3-lb sandwich (the half-pound brisket was actually too much food for me!). The beans often have great big pieces of brisket in them, which is nice if you can't choose between pork and beef. The only side that we weren't inordinately fond of was the coleslaw, which seems to be a bit heavy on the caraway. 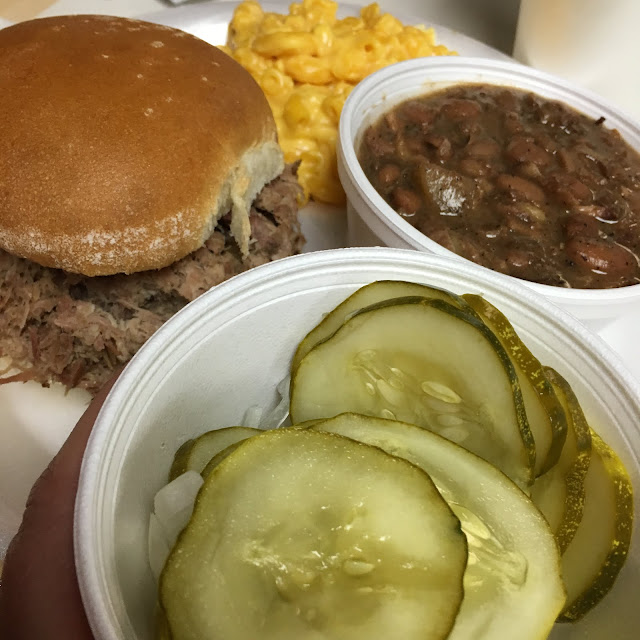 This is an unassuming, reasonably-priced place to get an epic meal, so if you ever find yourself in Joliet, this is a clear winner.

Here's a question for the ages: brisket or pork?

Facebook
Google Plus
Bloglovin'
Posted by Emily at 6:58 AM

Email ThisBlogThis!Share to TwitterShare to FacebookShare to Pinterest
Labels: adventure, Bernie Dexter, restaurants, Stuff We Did, what I wore