Just in case you missed all of my recent complaints about the unbearable summer weather, let me alert you to an important fact: it is hot in Chicago. Disgustingly, humidly, sweat-through-your-clothes-immediately HOT. For reasons that now seem incredibly silly, I decided to tough it out this summer and go without air-conditioning. Those reasons included the following:

1) We don't own an A/C;
2) It would cost a fortune;
3) We'd have to call our building manager to install an A/C
4) We have lots of fans!
5) We survived unbearable heat last summer.

This is clearly not how next summer will go. When it's this hot, I don't want to do anything, even things I typically love. Cook dinner? You've got to be kidding me! Take a walk? Um, maybe in October. Wear my favorite dresses? Absolutely not -- I don't want them to get sweaty, and I don't want to be uncomfortable, either. This last one has led me to finally embrace a major trend in the retro-style world: wearing my dresses as skirts! 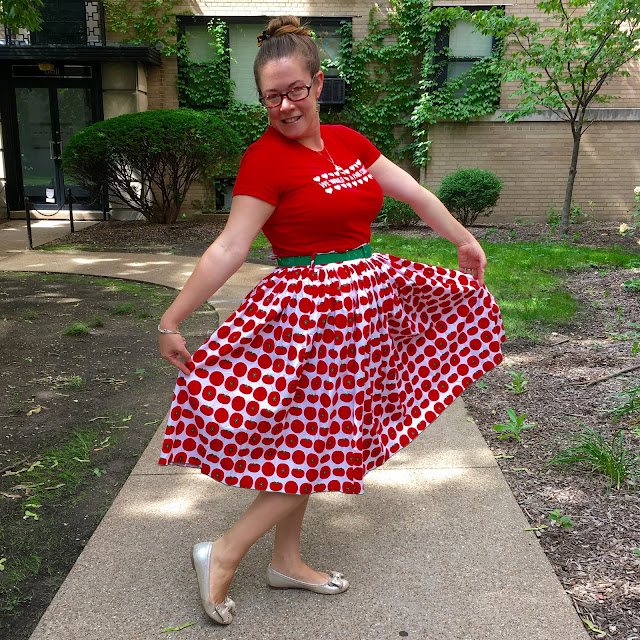 These pictures were taken during the world's fastest photo shoot, since the air was so oppressively thick that I couldn't bear to actually stand outside for more than approximately five minutes. I wouldn't have gotten dressed at all, except I realized that I'm better off spending a day of blogging inside an air-conditioned building, and the university's performing-arts center happens to be across the street from my apartment.

Another benefit of the dress-to-skirt conversion: T-shirts and cotton tank tops are much easier to wash than most of my dress collection, so this life hack lets me wear my favorite prints without making a ton of difficult laundry that I'd have to do when it's miserably hot outside.

This tomato-print Bernie Dexter dress is one of my all-time favorites, so I don't really want to wear it as a dress when I'm sweating up a storm. This, along with the handy belt loops, made it the perfect candidate for a dress-to-skirt conversion! I'm wearing bike shorts under the dress, both because the swampy, still air is a recipe for epic chafing, and to keep the outside of the bodice from irritating my legs.

I've found that red is actually one of the hardest colors to match, since there are so many different undertones, so it took a bit of a hunt to find the right top. Eventually, I settled on this old T-shirt I got when the California Faculty Association was campaigning for a new contract. (Fun fact: when I went up to where they were tabling, they were shocked that I was faculty rather than a student. #shortgirlproblems!) I'm not usually one for T-shirts, but I am quite fond of this one, as I greatly admire all the gains that the CFA made for contingent faculty (read: adjuncts) within the California State University system. 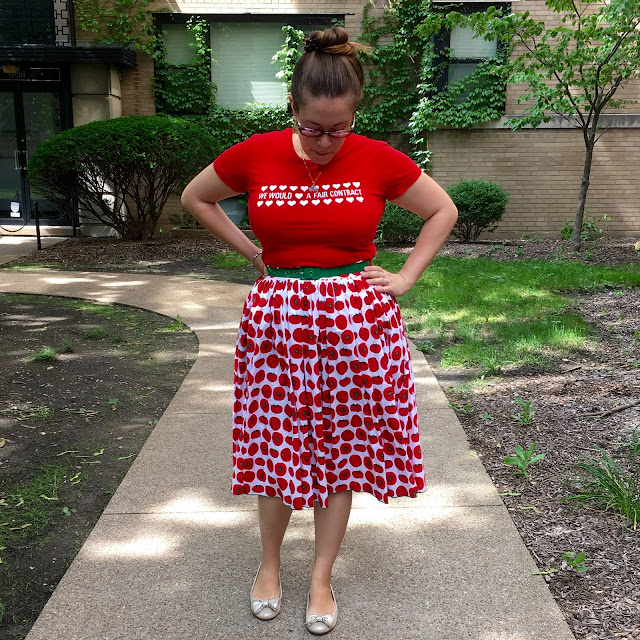 Who wouldn't love a fair contract? 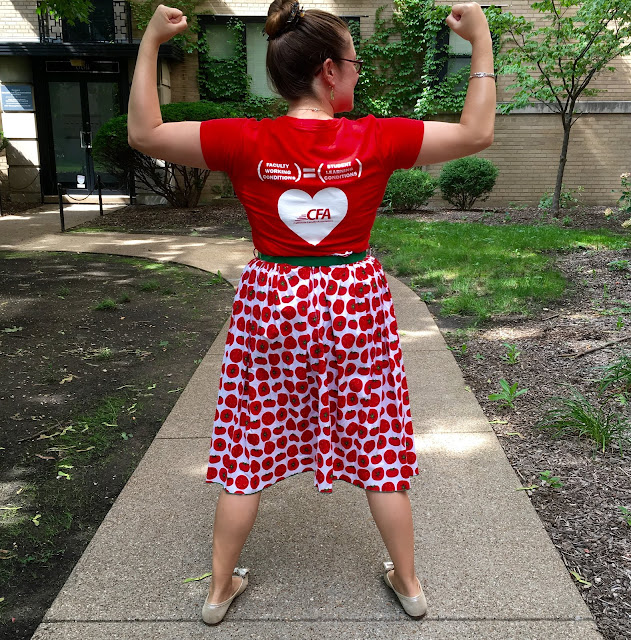 I am really proud of all those muscles you can't see!

In other news, between writing the previous paragraph and beginning this sentence, I had to dash home, because the skies darkened ominously. Now it is thundering quite impressively, so I'm glad I left when I did.

I'll let you in on a secret: I am terrified of thunder, so I'm deeply unhappy that Jeff is out of town. I'll admit that I'm slightly embarrassed by how much thunder and lightning scares me. My cousin and his partner came over this past weekend to catch up on Game of Thrones, and I felt horribly guilty for how unbearably hot my apartment was, but also super glad that they were there when it started to storm. We went out for a walk after the fourth episode to try to cool down, and saw the storm rolling in at dystopian/horror-movie speed, so we beat a hasty retreat to my apartment and watched three more episodes. Aunt Vicki, if you read this post, please don't tell Abe that I'm afraid of thunderstorms!

Ahem. Back to the outfit. I found it very comfortable to wear a dress as a skirt, and think it'll be something I do a lot more before summer is over! I can also see wearing some of my dresses with inappropriate necklines as skirts so that I can wear them to work. 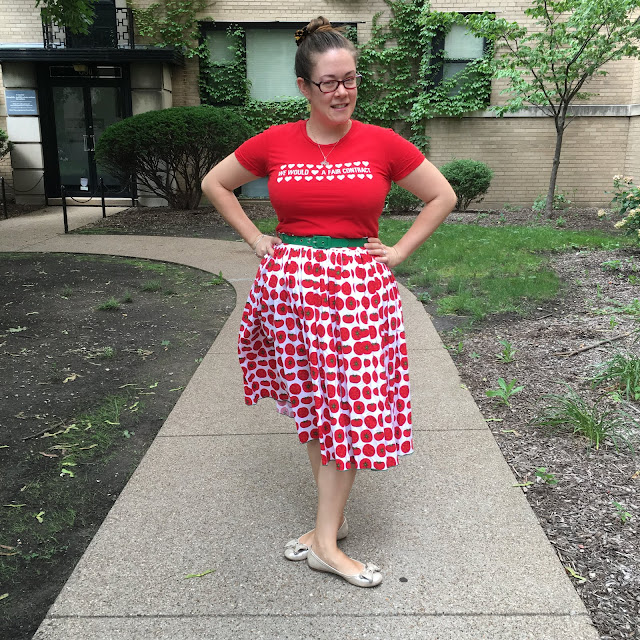 My face when the wind finally blows, but it's so hot that all it accomplishes is ruining your photo. 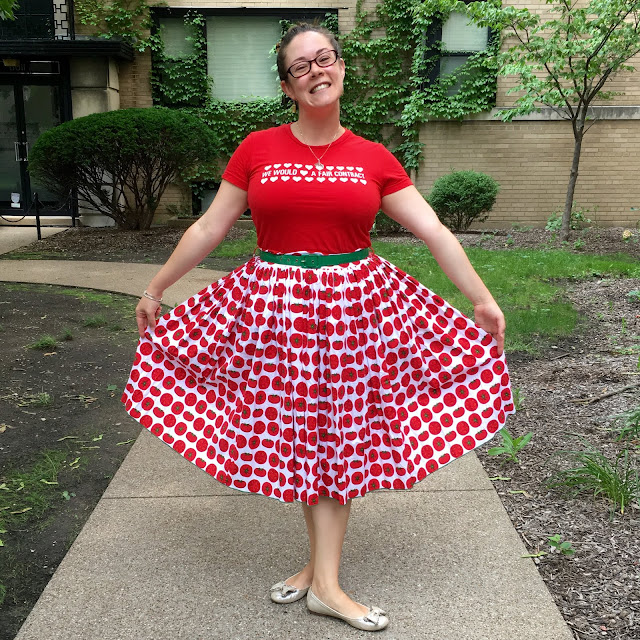 The first photo of the shoot, and I'm visibly proud of my lifehacking skills!

Does anyone else have a super embarrassing fear? Am I the only one who literally yelps and whimpers when thunder crashes directly overhead?

Facebook
Google Plus
Bloglovin'
Posted by Emily at 5:22 AM