The (Other) Love of My Life

I'll be honest with you: I'd envisioned my Valentine's Day post a bit differently. This time last year, I was enjoying the #7ShadesofRed challenge and plotting an epic feast involving large quantities of cheese. This year, I spent most of the past week in pajamas, propped up in my bed next to a large mug of tea. It doesn't do to dwell on what might have been, so let's just hope that next year, we'll see my planned post about ways to avoid the morass of cheap sentiment and commodified conceptions of love that plagues V-Day.

Instead, I'm going to tell you a bit about the love of my life that isn't Jeff, or dresses, or Star Wars. 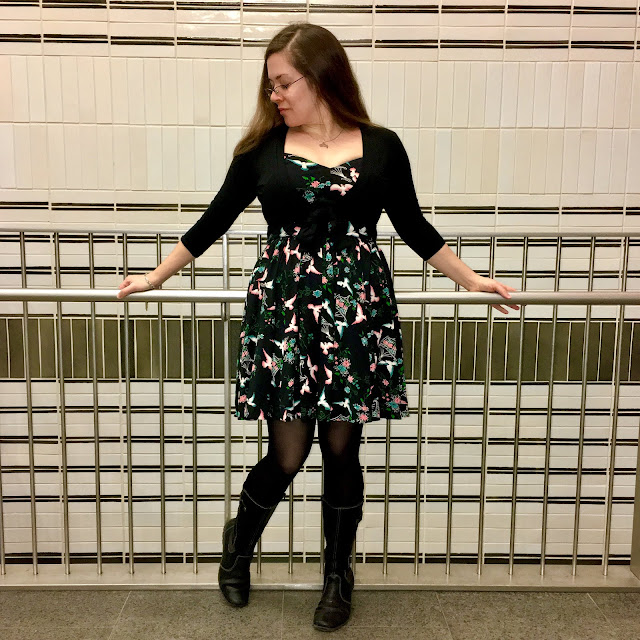 I'm talking, of course, about pizza. Not just any pizza, mind you: while deep dish is a perfectly serviceable combination of cheese, crust, sauce, and toppings, there is simply nothing on earth that compares to New York-style pizza. It's the Platonic Ideal of deliciousness, and the pinnacle of human culinary achievement. 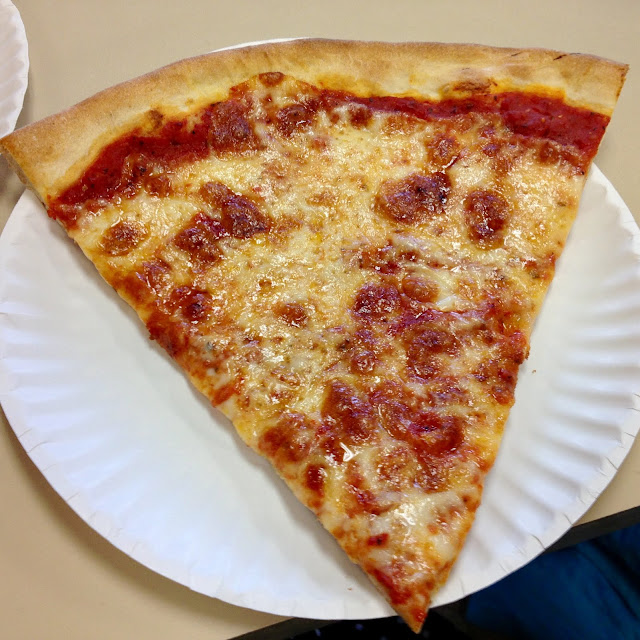 I'd trade half the unicorns in my closet for a slice or two right about now!

New York pizza is foldable, portable perfection. (Heaven help you if you eat this incredible food with a knife and fork. Hell, I can barely make myself eat deep dish with a fork.) It nails the grease-to-cheese-to-sauce ratios, it has just the right amount of crunchy crust, and it needs no fancy toppings or other adornments to augment its deliciousness.

There is almost nothing better than sitting down with a slice hot out of the oven in my favorite pizzeria, folding it in half, taking a massively overenthusiastic first bit, and then burning my palate on molten cheese, just a little. In fact, it's #3 on my list of 50 things that make me happy!

I cannot remember a time before I knew what pizza was. Babies in my family would often teeth on one of two stereotypically-New-York foods: pizza or bagels. My mom brought me to the pizzeria down the hill as soon as I was old enough to handle solid foods, and I brought my own godchildren at the same age. When I was in high school and my best friend got her driver's license, we'd get pizza for lunch at least once a week. By the end of high school, I owed her several hundred dollars worth of pizza. (We settled up eventually. It involved a Kate Spade bag.)

I'm not too proud to admit that I've had pizza from the same pizza place for lunch and dinner on the same day. When it's love, you don't need variety. 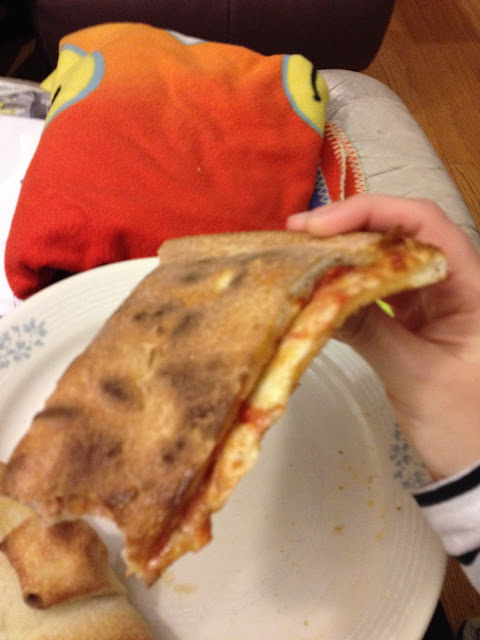 Pictured: the proper way to eat pizza -- folded in half and one-handed.

Now, I haven't lived in New York for close to a decade now, so you'd think I'd be used to extended pizza droughts. And to be fair, I'm usually fairly sanguine about my mostly pizza-free diet these days. But I have spent the past 24 hours or so in a frenzy over pizza, ever since I made the mistake of sitting down to watch Pizza Paradise on the Travel Channel with Jeff while he worked.

The pizza-related freakout of the past day or so has reminded me of something I was slightly infamous for in my wilder college-student days, in fact. Now, bear in mind that I'm a major homebody, so it was always a bit noteworthy when I'd actually leave the house I rented with some friends and go out to a bar. (I wouldn't usually make an effort to get dressed up when I did, mind you, because college was a weird alternate universe, sartorially speaking, and it was a rather long walk to the bar. Also, I went to a hippie school.)

When I did go out to the bars, though, I'd always be quite excited once I actually got there. I was Doing Things, after all!

But a funny thing would happen as soon as we'd ordered the first round of drinks. It would start small, with a simple question: "does anybody want pizza?" Usually someone would remind me that we'd just gotten to the bar, and we could get pizza later. This response would shut me up for approximately 90 seconds, after which point I'd ask again. And again, somewhat less quietly. And then I'd give up on leading questions and go straight to declarative statements about how much we needed pizza right away. And then I'd lose the ability to talk about anything else until we finally abandoned the bar and went to the pizza place down the street. 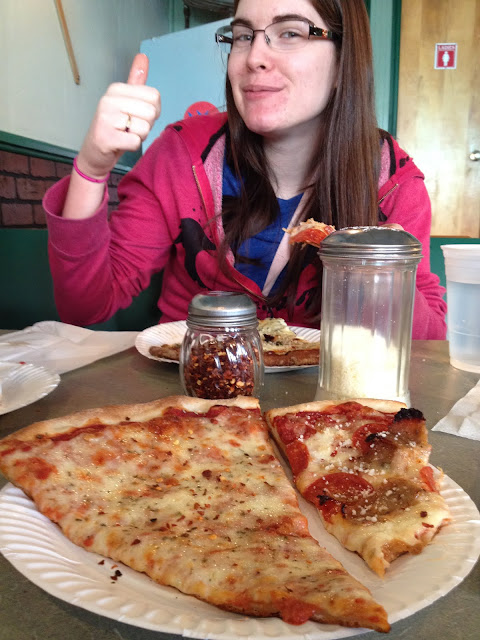 Ronnie and a plate of heaven, in what is undisputedly the best pizzeria in my college town.

On rare occasions, I made it to the end of the night, when everyone else was finally in the mood for pizza, but more often, we'd have to make a mid-evening pizza run after a drink (or two, if everyone else was lucky) and then return to the bar. Once I'd gotten what I needed, I would usually be able to concentrate on normal conversations and activities again, though those few nights where I got pizza twice remain some of the happiest nights out of my life. 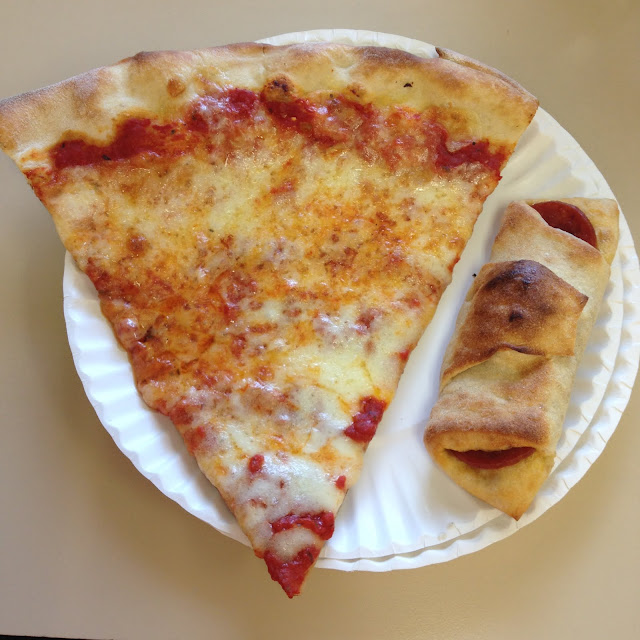 The most perfect meal in the world: a slice and a pepperoni roll.

As you can see, then, pizza and I go way back. It was definitely love at first bite! What's your all-time favorite food?

Facebook
Google Plus
Bloglovin'
Posted by Emily at 5:13 AM